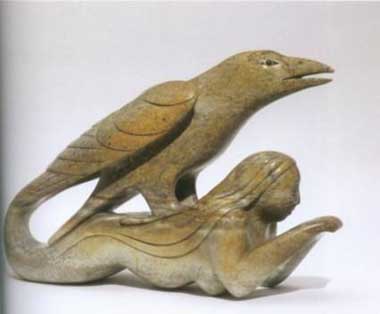 The traditional account of the Inuit people is that the trickster in the form of Raven created the world. When the waters forced the ground up from the deep Raven stabbed it with his beak and fixed it into place. This first land was just big enough for a single house occupied by a single family: a man, his wife and their son, Raven who had fixed the land. The father had a bladder hanging over his bed. After much pleading by Raven the father allowed the boy to play with it. While playing Raven damaged the bladder and light appeared. The father not wanting to have light always shining took the bladder from the boy before he could damage it further. This struggle is the origin of day and night.

In Inuit mythology, Sedna is the goddess of the sea and marine animals such as seals. A creation myth, the story of Sedna shows how she came to rule over Adlivun, the Inuit underworld. Sedna is also known as Arnakuagsak or Arnaqquassaaq (Greenland) and Satsuma Arnaa (Mother of the Deep, West Greenland) and Nerrivik (northern Greenland) or Nuliajuk (District of Keewatin, Northwest Territories). She is sometimes known by other names by different Inuit groups such as Arnapkapfaaluk (big bad woman) of the Copper Inuit from the Coronation Gulf areaand Takannaaluk (Igloolik).

A number of versions of the Sedna legend exist. In one legend Sedna is a giant, the daughter of the creator-god Anguta, with a great hunger that causes her to attack her parents. Angered, Anguta takes her out to sea and throws her over the side of his kayak. As she clings to the sides, he chops off her fingers and she sinks to the underworld, becoming the ruler of the monsters of the deep. Her huge fingers become the seals, walrus and whales hunted by the Inuit.

In another version of the legend she is dissatisfied with men found for her by her father, and so she marries a dog. Her father is so angry at this that he throws her into the sea, and when she tries to climb back into the boat he cuts off her fingers. Her fingers become the first seals and she becomes a mighty sea goddess. When she is angered someone is sent to wash her hair, (which she is unable to do herself without hands) after which she releases the animals to the hunters.

In the Netsilik Region, the story states that Nuliayuk was a mistreated orphan. One day the people tried to get rid of her by attempting to drown her by chopping off her finger tips. But the fingertips would transform to seals and walruses. Eventually Nuliayuk marries a Sculpin, and now lives in the sea controlling all sea mammals.

Other versions of the legend depict Sedna as a beautiful maiden who rejects marriage proposals from the hunters of her village. When an unknown hunter appears, Sedna's father agrees to give her to him as wife in return for fish. Sedna's father gives Sedna a sleeping potion and gives her to the hunter who takes her to a large nest on a cliff, revealing to her his true form, a great raven. She wakes surrounded by birds. Her father attempts to rescue her but, her husband, the bird creature, becomes angry, causing a great storm. In desperation, Sedna's father throws her into the raging sea. Attempting to cling to the kayak her hands freeze and her fingers fall off becoming the creatures of the sea. She falls to the bottom of the sea and grows a fish tail.

Sedna is kidnapped by a bird creature, in yet another version. Her father then leaves in his kayak to rescue her from the floating ice-island where she is imprisoned while the bird creature is away. The bird creature, enraged by her disappearance, calls to a spirit of the sea to help him. The Sea Spirit locates the Kayak with the two humans aboard and creates huge waves to kill them. Her father throws Sedna overboard in the hope that this will appease the angry sea god. Sedna clings to the kayak but her father grabs a little axe and chops three of her fingers off before striking her on the head. The three fingers each become a different species of seal. The stroke to her head sends Sedna to the ocean floor where she resides, commanding the animals of the sea.


The varying legends each give different rationales for Sedna's death. In each version the father takes her to sea in his canoe, severing her fingers and hands. And in each version she fell to the sea bottom to become the Goddess of Sea Creatures where she became a vital deity, worshiped by hunters who depended on her goodwill to supply food. Generally considered a vengeful goddess, hunters must placate and pray to Sedna to release sea animals for the hunt.