Iceland: Volcano Erupts and its Effects on Planet Earth 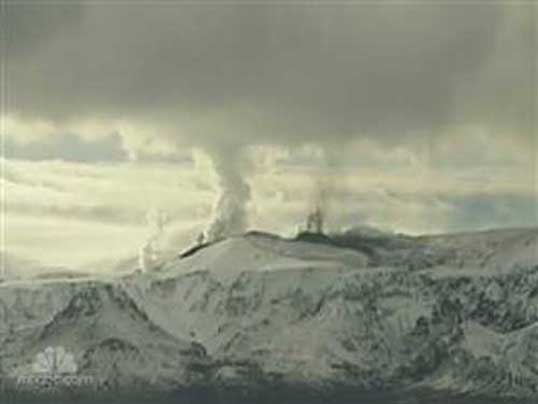 The tectonic plates are becoming active throughout the planet. This week takes us to Iceland and the effects of a volcanic eruption there last weekend. For those who believe this can be stopped by using whatever rituals they practice to save the planet ... get over it and wake up to what is physically happening. Tectonic plates cannot be repaired. They are part of a domino effect destined to happen now. The Ring of Fire has sets its course ... now the Atlantic is catching up. Volcanoes in Iceland   Wikipedia

Blasts of lava and ash shot out of a volcano in southern Iceland on Monday and small tremors rocked the ground, a surge in activity that raised fears of a larger explosion at the nearby Katla volcano.

Scientists say history has proven that when the Eyjafjallajokull volcano erupts, Katla follows Ń the only question is how soon. And Katla, located under the massive Myrdalsjokull icecap, threatens disastrous flooding and explosive blasts when it blows.

Saturday's eruption at Eyjafjallajokull - dormant for nearly 200 years - forced at least 500 people to evacuate. Most have returned to their homes, but authorities were waiting for scientific assessments to determine whether they were safe to stay. Residents of 14 farms nearest to the eruption site were told to stay away. Several small tremors were felt early Monday, followed by spurts of lava and steam rocketing into the air.

Iceland sits within a volcanically active region on the Atlantic's mid-oceanic ridge.

Eruptions, common throughout Iceland's history, are often triggered by seismic activity when the Earth's plates move and when magma from deep underground pushes its way to the surface.

Like earthquakes, predicting the timing of volcanic eruptions is an imprecise science. An eruption at the Katla volcano could be disastrous, however - both for Iceland and other nations.

Iceland's Laki volcano erupted in 1783, freeing gases that turned into smog. The smog floated across the Jet Stream, changing weather patterns. Many died from gas poisoning in the British Isles. Crop production fell in western Europe. Famine spread. Some even linked the eruption, which helped fuel famine, to the French Revolution. Painters in the 18th century illustrated fiery sunsets in their works.

The winter of 1784 was also one of the longest and coldest on record in North America. New England reported a record stretch of below-zero temperatures and New Jersey reported record snow accumulation. The Mississippi River also reportedly froze in New Orleans.

There are three main places where volcanoes normally occur - along strike-slip faults, such as the one linked to Mount St. Helens' eruption in Washington state 30 years ago; along areas where plates overlap one another, such as in the Philippines and the Pacific Rim; and in areas like Iceland, which is affected by the movement of two geological plates in a so-called spreading system.

Magnus Tumi Gudmundsson, a geologist at the University of Iceland who flew over the site Monday, said the beginning of Saturday's eruption was so indistinct that it initially went undetected by geological instruments. Many of the tremors were below magnitude 2.6.

"A general expectation is that because of the Eyjafjallajokull eruption, the fissure would widen and in that sense, there's a greater risk of extending into or underneath the glaciers and prompting an eruption at Katla," said Andy Russell with Newcastle University's Earth Surface Processes Research Group, who went with a team to Iceland before the eruption. "From records, we know that every time Eyjafjallajokull erupts, Katla has also erupted."

Russell said past Katla eruptions have caused floods the size of the Amazon and sent boulders as big as houses tumbling down valleys and roads. The last major eruption took place in 1918. Floods followed in as little as an hour.

Those eruptions have posed risks to residents nearby, but most of Iceland's current population of 320,000 live in the capital of Reykjavik on the western part of the island. Southern Iceland is sparely populated but has both glaciers and unstable volcanoes - a destructive combination. The last time there was an eruption near the 100-square-mile (160 square-kilometer) Eyjafjallajokull glacier was in 1821, and that was a "lazy" eruption that lasted slowly and continuously for two years.