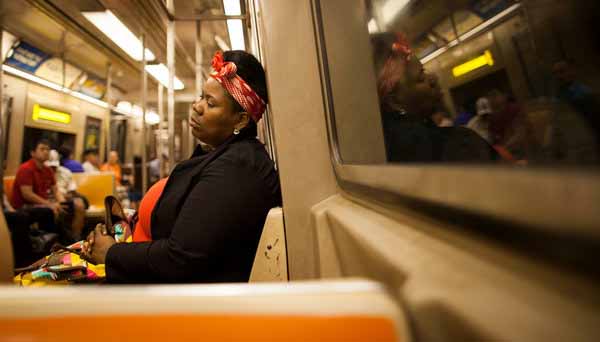 As with all major cities, we find the homeless herein New York City, generally those who can't take care of themselves due to mental illness or substance abuse. Most of these people can't work, depending on benefits from the government and in many cases hand-outs from people they encounter along the way.

There is another group of homeless in the city today ceased by the 2008 the recession. Never would one expect to find someone with two jobs, to be homeless. And once you are homeless, it is often difficult to find someone to rent you an apartment.


In New York, Having a Job, or 2, Doesn't Mean Having a Home   New York Times - September 18, 2013
On many days, Alpha Manzueta gets off from one job at 7 a.m., only to start her second at noon. In between she goes to a place she's called home for the last three years - a homeless shelter. Advocates of affordable housing say that the employed homeless are proof of the widening gap between wages and rents - which rose in the city even during the latest recession - and, given the shortage of subsidized housing, of just how difficult it is to escape the shelter system, even for people with jobs.

"I feel stuck," said Ms. Manzueta, 37, who has a 2 year-old daughter and who, on a recent Wednesday, looked crisp in her security guard uniform, waving traffic away from the curb at Kennedy International Airport. "You try, you try and you try and you're getting nowhere. I'm still in the shelter."

With New York City's homeless population in shelters at a record high of 50,000, a growing number of New Yorkers punch out of work and then sign in to a shelter, city officials and advocates for the homeless say. More than one out of four families in shelters, 28 percent, include at least one employed adult, city figures show, and 16 percent of single adults in shelters hold jobs.

Mostly female, they are engaged in a variety of low-wage jobs as security guards, bank tellers, sales clerks, computer instructors, home health aides and office support staff members. At work they present an image of adult responsibility, while in the shelter they must obey curfews and show evidence that they are actively looking for housing and saving part of their paycheck.

Advocates of affordable housing say that the employed homeless are proof of the widening gap between wages and rents -which rose in the city even during the latest recession -and, given the shortage of subsidized housing, of just how difficult it is to escape the shelter system, even for people with jobs.

"A one-bedroom in East New York or the South Bronx is still $1,000 a month," said Patrick Markee, senior policy analyst with the Coalition for the Homeless, an advocacy and housing services group. "The jobs aren't enough to get people out of homelessness."

David Garza, executive director of Henry Street Settlement, which runs three family shelters and one shelter for single women with mental illnesses, said that five years ago his shelters were placing 200 families a year into permanent housing. Last year, he said, they placed 50.

"Without low-income housing, it's a maze with no way out," Mr. Garza said.

The employed homeless are constantly juggling the demands of their two worlds.

A 45-year-old woman named Barbara, who works part time as a public transit customer service representative, said she had to keep items like razors and nail clippers at a storage center because they were not allowed in the shelter for security reasons.

Sometimes she takes a tote bag filled with dirty clothes to work to take to the laundromat afterward, she said, because the machines at the shelter are always either broken or being used. But, she said, there is no escaping the noise and fitful sleep of a dormitory shared with eight other women.

Like most homeless employed people interviewed for this article, Barbara did not want to be identified by her full name for fear of losing her privacy or her job. She has been homeless since 2011, she said, when her unemployment insurance ran out and she could no longer afford her apartment in Brooklyn. No one at work knows, she said. "When it comes to the professional arena, I want people to think that I got it together, that I'm not living paycheck to paycheck, that my only option isn't to buy secondhand," she said.

Sometimes homeless workers discover one another.

Deirdre Cunningham, 21, who works two part-time jobs -as a bank teller and as a sales clerk for an electronics store in Manhattan, said that at one point a co-worker at the store invited her to an evening event. "I said, ÔI can't go, because I have curfew,' and this co-worker said, ÔWhat do you mean curfew?' " "I said, ÔI live in a shelter,' and she said, ÔI do, too.' "

Ms. Cunningham, who has a 4-year-old daughter, said she has always been open about her struggles. "A lot of people have problems, too," she said.

She said she left her parents' home in the South Bronx in 2011 because she did not want to expose her daughter to "family issues." Two years and three shelters later, she moved in August into her own $900-a-month one-bedroom apartment in the Bronx with the help of a rent subsidy from the Coalition for the Homeless. But the aid lasts for only two years.

"Now that I got my living situation under control, now it's time for me to go back to school, get a better job, be more of a mother," said Ms. Cunningham, who has completed training as a medical assistant but aspires to be a journalist. "My daughter wants to take ballet," she said.

A city-commissioned study by the Vera Institute of Justice in 2005 found that "contrary to popular belief," 79 percent of homeless heads of family had recent work histories and more than half had educational levels, up to college, that made them employable.

Most, the study found, had experienced "destabilizing" events before entering the shelter, most commonly the loss of a job, an eviction or the loss of public assistance benefits.

In 2004, Mayor Michael R. Bloomberg unveiled an ambitious plan to reduce the city's homeless population -then 38,000 -by two-thirds in five years. The plan envisioned shifting dollars away from the shelter system to create low-income housing with social services.

To make the shelter system less inviting, the city also stopped giving homeless families priority for public housing, and made it harder for those who left the system to return.

In 2011, when the state and federal support were withdrawn, the city ended a program that gave rent subsidies for up to two years to help families move out of shelters and into their own apartments.

Now the number of shelter residents hovers around 50,000, according to the city's Department of Homeless Services. More than 9,000 are single adults and more than 40,000 other residents are in families, including 21,600 children. The average monthly cost for the government to shelter a family is more than $3,000; the cost for a single person is more than $2,300.

Linda I. Gibbs, Mr. Bloomberg's deputy mayor for health and human services, said there were no local resources to keep up with demand for subsidized housing after both federal and state money dried up. Advocates for the homeless say the city should restore housing assistance for shelter residents, including giving them priority for public housing. But in an interview, Ms. Gibbs reiterated the Bloomberg administration's long-held position that more benefits only attract more people to shelters. "That drives more demand," she said. "It's a Catch-22." Ms. Gibbs said officials were now exploring expanding a city program that helps families at risk of losing their homes to stay in place.

But those like Ms. Manzueta, the security guard, still need a way out. She said she managed to hold on to her $8-an-hour positions and to take courses to learn new skills. But with an eviction marring her credit record and unable to afford more than $1,000 for rent, she has not been able to land an apartment.

"New York City," said Ms. Manzueta, a native, "is the hardest city to live in."