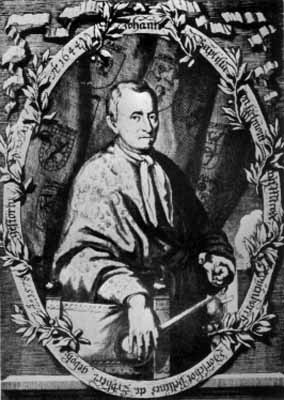 Jan Baptist van Helmont (January 12, 1577 - December 30, 1644) was a Flemish chemist, physiologist and physician. Born into a noble family in Brussels, he was educated at Leuven, and after ranging restlessly from one science to another and finding satisfaction in none, turned to medicine, in which he took his doctor's degree in 1599.

The next few years he spent in traveling through Switzerland, Italy, France, and England. Returning to his own country he was at Antwerp at the time of the great plague in 1605, and having contracted a rich marriage settled in 1609 at Vilvoorde, near Brussels, where he occupied himself with chemical experiments and medical practice until his death.

Van Helmont presents curious contradictions. On the one hand he was a disciple of Paracelsus (though he scornfully repudiates his errors as well as those of most other contemporary authorities), a mystic with strong leanings to the supernatural, an alchemist who believed that with a small piece of the philosopher's stone he had transmuted 2,000 times as much mercury into gold; on the other hand he was touched with the new learning that was producing men like Harvey, Galileo and Bacon, a careful observer of nature, and an exact experimenter who in some cases realized that matter can neither be created nor destroyed.

As a chemist he deserves to be regarded as the founder of pneumatic chemistry, even though it made no substantial progress for a century after his time, and he was the first to understand that there are gases distinct in kind from atmospheric air.

The very word "gas" he claims as his own invention, and he perceived that his "gas sylvestre" (our carbon dioxide) given off by burning charcoal is the same as that produced by fermenting must and that which sometimes renders the air of caves irrespirable. For him air and water are the two primitive elements of things.

Fire he explicitly denies to be an element, and earth is not one because it can be reduced to water. That plants, for instance, are composed of water he sought to show by the ingenious quantitative experiment of planting a willow weighing 5 lb (2 kg) in 200 lb (90 kg) of dry soil and allowing it to grow for five years; at the end of that time it had become a tree weighing 169 lb (76 kg), and since it had received nothing but water and the soil weighed practically the same as at the beginning, he argued that the increased weight of wood, bark and roots had been formed from water alone.

It was an old idea that the processes of the living body are fermentative in character, but he applied it more elaborately than any of his predecessors. For him digestion, nutrition, and even movement are due to ferments, which convert dead food into living flesh in six stages. But having got so far, with the application of chemical principles to physiological problems, he introduces a complicated system of supernatural agencies like the archeus of Paracelsus, which preside over and direct the affairs of the body.

A central archeus controls a number of subsidiary archei which move through the ferments, and just as diseases are primarily caused by some affection (exorbitatio) of the archeus, so remedies act by bringing it back to the normal.

At the same time chemical principles guided him in the choice of medicines - undue acidity of the digestive juices, for example, was to be corrected by alkalis and vice versa; he was thus a forerunner of the iatrochemical school, and did good service to the art of medicine by applying chemical methods to the preparation of drugs. Over and above the archeus he taught that there is the sensitive soul which is the husk or shell of the immortal mind.

Before the Fall the archeus obeyed the immortal mind and was directly controlled by it, but at the Fall men received also the sensitive soul and with it lost immortality, for when it perishes the immortal mind can no longer remain in the body.

In addition to the archeus, which he described as "aura vitalis seminum, vitae directrix," Van Helmont had other governing agencies resembling the archeus and not always clearly distinguished from it. From these he invented the term blas, defined as the "vis motus tam alterivi quam localis. Of blas there were several kinds, e.g. blas humanum and blas meteoron; the heavens he said, "constare gas materia et blas efficiente.

He was a faithful Catholic, but incurred the suspicion of the Church by his tract De magnetica vulnerum curatione (1621), which defended Rudolf Goclenius, Jr., a Calvinist professor of medicine at the University of Marburg, against the Jesuit Johannes Roberti.

The Spanish Inquisition persecuted him as it was thought that his "magnetic cure" derogated from some of the miracles.

From 1633 to 1636, he was arrested and could not publish until 1642. His works were collected and published at Amsterdam as Ortus medicinae, vel opera et opuscula omnia in 1648 by his son Franz Mercurius (b. 1618 at Vilvorde, d. 1699 at Berlin), in whose own writings e.g. Cabbalah Denudata (1677) and Opuscula Philosophica (1690) mystical theosophy and alchemy appear in still wilder confusion. Helmont