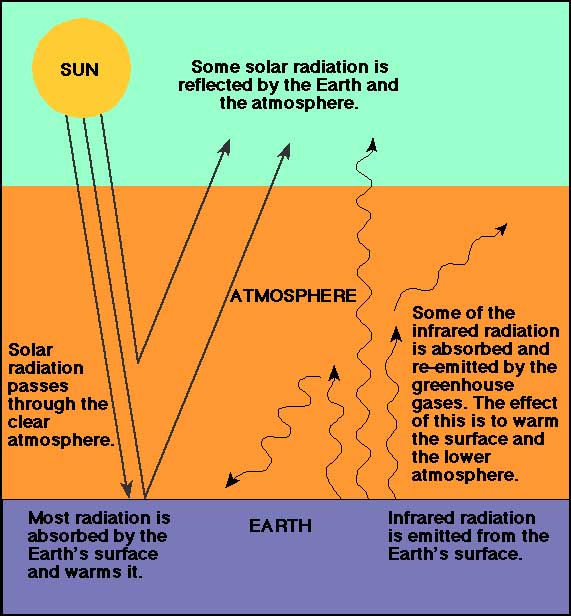 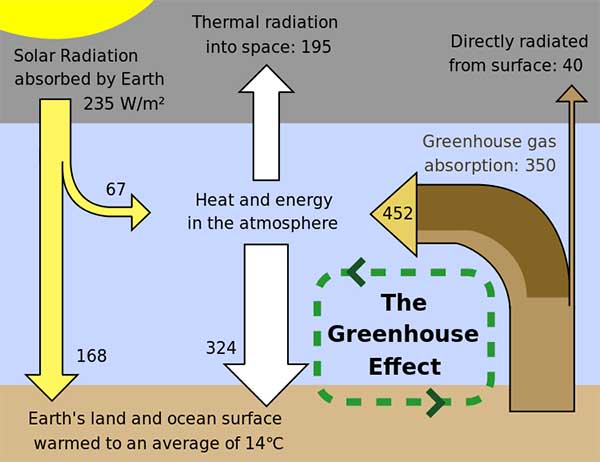 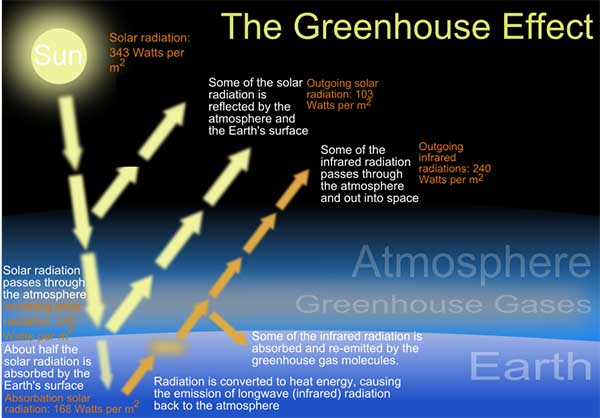 The greenhouse effect is a process by which thermal radiation from a planetary surface is absorbed by atmospheric greenhouse gases, and is re-radiated in all directions. Since part of this re-radiation is back towards the surface and the lower atmosphere, it results in an elevation of the average surface temperature above what it would be in the absence of the gases

Solar radiation at the frequencies of visible light largely passes through the atmosphere to warm the planetary surface, which then emits this energy at the lower frequencies of infrared thermal radiation. Infrared radiation is absorbed by greenhouse gases, which in turn re-radiate much of the energy to the surface and lower atmosphere. The mechanism is named after the effect of solar radiation passing through glass and warming a greenhouse, but the way it retains heat is fundamentally different as a greenhouse works by reducing airflow, isolating the warm air inside the structure so that heat is not lost by convection.

The Earth receives energy from the Sun mostly in the form of visible light. The bulk of this energy is not absorbed by the atmosphere since the atmosphere is transparent to visible light. 50% of the sun's energy reaches the Earth which is absorbed by the surface as heat. Because of its temperature, the Earth's surface radiates energy in infrared range.

The Earth receives energy from the Sun in the form of radiation. Most of the energy is in visible wavelengths and in infrared wavelengths that are near the visible range (often called "near infrared"). The Earth reflects about 30% of the incoming solar radiation. The remaining 70% is absorbed, warming the land, atmosphere and ocean.

For the Earth's temperature to be in steady state so that the Earth does not rapidly heat or cool, this absorbed solar radiation must be very closely balanced by energy radiated back to space in the infrared wavelengths. Since the intensity of infrared radiation increases with increasing temperature, one can think of the Earth's temperature as being determined by the infrared flux needed to balance the absorbed solar flux. The visible solar radiation mostly heats the surface, not the atmosphere, whereas most of the infrared radiation escaping to space is emitted from the upper atmosphere, not the surface. The infrared photons emitted by the surface are mostly absorbed in the atmosphere by greenhouse gases and clouds and do not escape directly to space.

The reason this warms the surface is most easily understood by starting with a simplified model of a purely radiative greenhouse effect that ignores energy transfer in the atmosphere by convection (sensible heat transport, Sensible heat flux) and by the evaporation and condensation of water vapor (latent heat transport, Latent heat flux). In this purely radiative case, one can think of the atmosphere as emitting infrared radiation both upwards and downwards. The upward infrared flux emitted by the surface must balance not only the absorbed solar flux but also this downward infrared flux emitted by the atmosphere. The surface temperature will rise until it generates thermal radiation equivalent to the sum of the incoming solar and infrared radiation.

A more realistic picture taking into account the convective and latent heat fluxes is somewhat more complex. But the following simple model captures the essence. The starting point is to note that the opacity of the atmosphere to infrared radiation determines the height in the atmosphere from which most of the photons are emitted into space. If the atmosphere is more opaque, the typical photon escaping to space will be emitted from higher in the atmosphere, because one then has to go to higher altitudes to see out to space in the infrared. Since the emission of infrared radiation is a function of temperature, it is the temperature of the atmosphere at this emission level that is effectively determined by the requirement that the emitted flux balance the absorbed solar flux.

But the temperature of the atmosphere generally decreases with height above the surface, at a rate of roughly 6.5 °C per kilometer on average, until one reaches the stratosphere 10-15 km above the surface. (Most infrared photons escaping to space are emitted by the troposphere, the region bounded by the surface and the stratosphere, so we can ignore the stratosphere in this simple picture.) A very simple model, but one that proves to be remarkably useful, involves the assumption that this temperature profile is simply fixed, by the non-radiative energy fluxes.

Given the temperature at the emission level of the infrared flux escaping to space, one then computes the surface temperature by increasing temperature at the rate of 6.5 °C per kilometer, the environmental lapse rate, until one reaches the surface. The more opaque the atmosphere, and the higher the emission level of the escaping infrared radiation, the warmer the surface, since one then needs to follow this lapse rate over a larger distance in the vertical. While less intuitive than the purely radiative greenhouse effect, this less familiar radiative-convective picture is the starting point for most discussions of the greenhouse effect in the climate modeling literature.


Degrading plastics revealed as source of greenhouse gases   PhysOrg - August 1, 2018
Mass production of plastics started nearly 70 years ago and the production rate is expected to double over the next two decades. While serving many applications because of their durability, stability and low cost, plastics have deleterious effects on the environment. Plastic is known to release a variety of chemicals during degradation, which has a negative impact on organisms and ecosystems. The study reports the unexpected discovery of the universal production of greenhouse gases methane and ethylene by the most common plastics when exposed to sunlight.