How Gratitude Can Improve Your Life 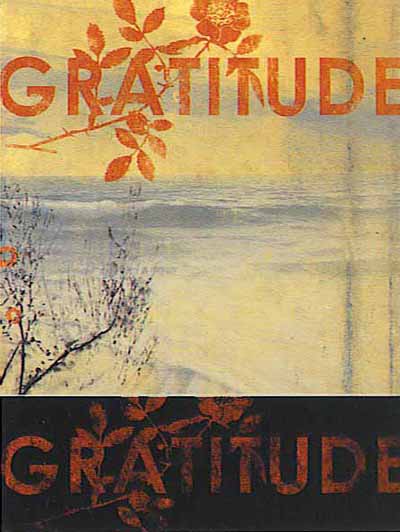 Gratitude, thankfulness, gratefulness, or appreciation is a feeling or attitude in acknowledgment of a benefit that one has received or will receive. The experience of gratitude has historically been a focus of several world religions, and has been considered extensively by moral philosophers such as Adam Smith.


7 Ways to Have a Happy New Year   Live Science - December 31, 2012
Feeling grateful makes people feel good: That's not just intuition, it's science. Research also shows it's possible to cultivate an attitude of gratitude. One of the creators of the World Gratitude Map, Jacqueline Lewis, shares some tips on how to feel more grateful, and happier, in your New Year. Once you find your sources of gratitude, you can post them to the web-based Map, which helps people around the world record and share the things for which they feel grateful.

1. Slow down and take notice: Pick three good things that you see or experience during the day, then write them down or post them on the World Gratitude Map. You can also throw a quarter or a dollar in a jar. When it's filled, treat yourself, or better yet, someone else, Lewis suggests.

2. Saying thank you: Take time to thank someone every day, anything from a card to an email or a hand on the shoulder will do. Connecting with others this way will help you get outside of your own head, Lewis said. Research that came out in May revealed a simple "thank you" may boost relationship satisfaction. The undergraduates in the study, detailed in the Journal of Personality and Social Psychology, reported feeling more appreciative of their partners the day after they themselves felt more appreciated. Those who felt appreciated were also less likely to break up in the following nine months, saying they felt even more committed to each other at that time.

3. Build in ways to help others: For example, Lewis recalls throwing a party and asking that, in lieu of gifts, guests bring gift cards to donate to a local shelter. Science has shown those people who buy gifts for friends or give charitable donations experience a happiness boost not seen in individuals who spend on themselves. That study was published in 2008 in the journal Science.

4. Feel your feelings: If you miss someone, don't try to escape the feeling; instead use it to feel thankful. When missing her mom, who passed away in 2011, Lewis remembered how her mother used to re-arrange the furniture when she was stressed. So, to thanks her mother, Lewis re-arranged her own furniture. "You are not going to avoid the loss and the sadness, but you can take control of it," Lewis said.

5. Find ways to connect to faraway loved ones: Around Easter one year, when Lewis' mother was dying, Lewis said she brought friends and family together in spirit, or at least costume, by asking everyone to send photos of themselves wearing bunny ears for "Bunnyfest." Another example: Lewis said her sister and a remote friend have used Skype to cook together.

6. Be creative with nostalgia: Make a whimsical photo album to enjoy. Include silly pictures of yourself or friends, and take a look back at it every so often. Turns out, nostalgia really can warm the heart: Research has found a sentimental longing or wistful affection for the past can warm up the body. In addition, looking at the past in a rosy light, such as with silly photo journeys, can really boost happiness. This phenomenon may explain why extroverts are happier than other personality types, according to a study published in 2011 in the journal Personality and Individual Differences.

7. Notice what you have: One Christmas, Lewis received a gift that made her cringe: a bright-yellow ski suit. When she opened it, she envisioned herself as a big lemon, tumbling down a slope. Her husband at the time, who had given it to her, tried to explain: "It's the yellow snowsuit." Then she realized he was referring to a story she'd told him about the moment she felt most loved and safe, when her mother was zipping her into a yellow snowsuit as a young child. Her then-husband had wanted to replicate that moment for her. The lesson: "We have an idea of what the holidays should look like, what we are entitled to, what love looks like, what happiness looks like, and then we are measuring our life against this idealistic version of what we should have," she said. "That is what stands in the way of noticing what we have."