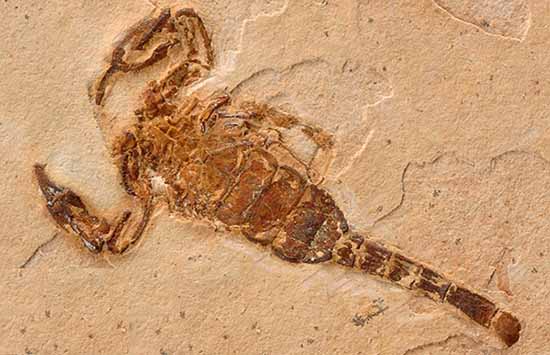 Scorpions have been found in many fossil records, including marine Silurian and estuarine Devonian deposits, coal deposits from the Carboniferous Period and in amber. The oldest known scorpions lived around 430 million years ago in the Silurian period. Though once believed to have lived on the bottom of shallow tropical seas,[ early scorpions are now believed to have been terrestrial and to have washed into marine settings together with plant matter. These first scorpions were believed to have had gills instead of the present forms' book lungs though this has subsequently been refuted. The oldest Gondwanan scorpiones (Gondwanascorpio) comprise the earliest known terrestrial animals from Gondwana. Currently, 111 fossil species of scorpion are known. Unusually for arachnids, there are more species of Palaeozoic scorpion than Mesozoic or Cenozoic ones.

The eurypterids, marine creatures that lived during the Paleozoic era, share several physical traits with scorpions and may be closely related to them. Various species of Eurypterida could grow to be anywhere from 10 centimetres (3.9 in) to 2.5 metres (8.2 ft) in length. However, they exhibit anatomical differences marking them off as a group distinct from their Carboniferous and Recent relatives. Despite this, they are commonly referred to as "sea scorpions". Their legs are thought to have been short, thick, tapering and to have ended in a single strong claw; it appears that they were well-adapted for maintaining a secure hold upon rocks or seaweed against the wash of waves, like the legs of a shore crab. Read more ...

First microwhip scorpion from Mesozoic period found in Burmese amber   PhysOrg - March 9, 2016
It's smaller than a grain of rice, yellowish, trapped in amber and lived 100 million years ago alongside dinosaurs. Meet Electrokoenenia yaksha, a newly described type of microwhip scorpion, or palpigrade, from Myanmar, whose minute fossilized remains have been found, trapped in Burmese amber.


Man-sized sea scorpion claw found   BBC - November 21, 2007
The immense fossilized claw of a 2.5m-long (8ft) sea scorpion has been described by European researchers. The 390-million-year-old specimen was found in a German quarry, the journal Biology Letters reports. The creature, which is called Jaekelopterus rhenaniae, would have paddled in a river or swamp. The size of the beast suggests that spiders, insects, crabs and similar creatures were much larger in the past than previously thought, the team says. The claw itself measures 46cm - indicating its owner would have been longer even than the average-sized human. Overall, the estimated size of the animal exceeds the record for any other sea scorpion (eurypterid) find by nearly 50cm.