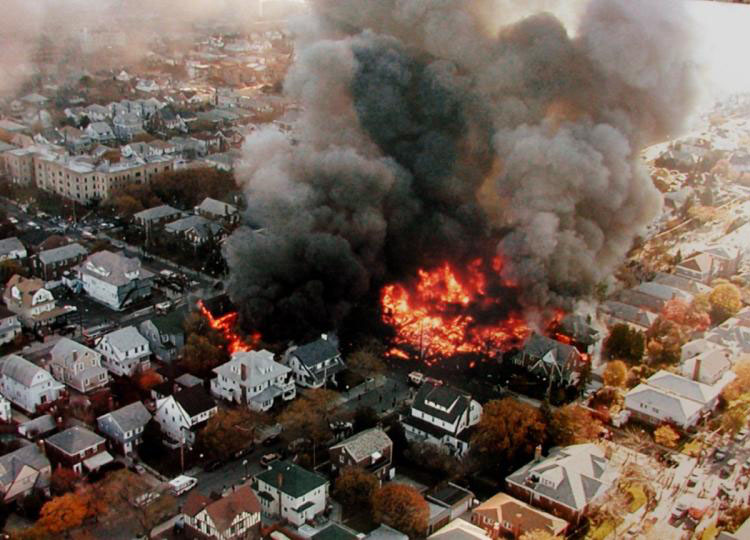 American Airlines Flight 587 crashes into the Belle Harbor neighborhood of Queens in New York City shortly after takeoff from John F. Kennedy International Airport on November 12, 2001. This was the second deadliest U.S. aviation accident to date.

This event occurred two months, almost to the day, after the World Trade Center was attacked on 9/11. Once again the ripples of a tragic plane accident ripple through the corridors of the New York City grid, a city barely recovering from the last plane crash, now in shock and waiting so see if we are under attack again.

Ground Zero is several miles west of where I live, Belle Harbor is several miles to the east. Both are on the water on the Atlantic seaboard, the famed Statue of Liberty standing bravely on Liberty Island, between Ground Zero and my home. I live facing the Atlantic water at the foot of the Verrazano Bridge centered between Ground Zero and Belle Harbor, Queens. Is there a correlation? I may never know the answer. American Airlines flight 587 left JFK airport from Gate 22. Is there a metaphor here? Numerology

Belle Harbor was hit hard on 9/11 as many firefighter and police officers live in the area. The area is residential and a beach front community comprised of hard working people. Most of the children who grow up there, marry and settle there. It is part of the Broad Channel area of NYC, called the Rockaways.

I have many clients in the area. Most of the people who have come to me to channel deceased loved ones who died on 9/11, come from this area. One woman told me that six families on her block lost people on 9/11. Still reeling from the shock of these events we find another challenge to this soul group today.

Outside my home I hear the sounds of sirens as ambulances, police, fire fighters from all over the area rushing along the Belt Parkway to the scene of the accident. reminiscent of 9/11. The airports, tunnels, and bridges are now closed so emergency personnel can get through.

The energy of the people who live and work in New York City is always on the alert these days and response time to emergencies is quick. In recent years I would watch other disasters around the world and wonder how New Yorkers would respond in such emergency conditions. It was always as if I was sensing something about to come yet never believing that my beautiful city would be harmed by such a disaster. Yet I never run on Fear! In every scenario I saw New Yorkers showing strength as a group as they overcame obstacles. As with all places we chose to live, New York has a frequency, a pulse or heartbeat that we are all linked to and respond as a Soul Unit.

Three hours later ... I just returned from shopping for groceries and flowers. I always have fresh flowers on my table as spirits are drawn to flowers. As I was selecting my flowers today, I was assailed by the cries of the souls who died in today's air disaster. I stood there looking at the flowers trying to decide what to buy as I am always guided to the many choices available. Someone, on the other side, told me to buy raspberry-pink roses.

Tow hours later ... My friend Frank, works for a small private airline that flies from JFK to the Dominican Republic. At this time he is not sure how this will affect business as busy season is Christmas which is just around the corner. This will not be a Merry Christmas for so many people in 2001 now only six weeks away. I have many clients from the Dominican Republic. Some stay here with families for 6 months on six-month visas. They work during that time, off the books, then return home for another 6 months, then repeat the cycle. These are generally family people, very hard working, who can't find work in their country.

The time grids are calmer but still fluctuate strongly like a graph that has high peaks. I sense trouble ahead but not in NYC. The energies will shift to Europe - London and Spain.

The spirits who have crossed yesterday are being assisted by those who died on 9/11. Last night I worked with many others to help bring these souls into light and understanding. What I have discovered about a plane crash is that the souls actually leave the physical body before the final impact.

Spirit tells me that this was not a terrorist attack. There is something about this scenario that takes me to the crash of TWA Flight 800 which exploded over the Atlantic Ocean on July 17, 1996 and JFK Jr.'s crashed flight on August 15, 1999.

A client who lives in Arizona emailed today and told me that she spoke with a Native American elder who channels 'Star People'. They showed him the Twin Towers attack, just before it happened. He considers this part of End Time events in which we enter a 'Time of Transition' from 'Fourth World' (era of early- 21st Century techno-materialistic civilization) to 'Fifth World' an eventual period of increased psychic abilities, social equality, more open, trusting, and ecologically-sensitive culture, and more mutually-responsible, regionally-fraternal society with global consciousness -- Hopi Prophecies.