It is not clear whether the process of adaptation from the Greek alphabet took place in Italy from the first colony of Greeks, the city of Cumae, or in Greece/Asia Minor. It was in any case a Western Greek alphabet.

The earliest Etruscan abecedarium, the Marsiliana d'Albegna (near Grosseto) tablet which dates to c. 700 BC, lists 26 letters corresponding to contemporary forms of the Greek alphabet which retained san and qoppa but which had not yet developed omega. 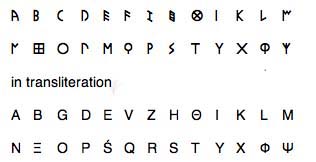 Until about 600 BC, the archaic form of the Etruscan alphabet remained practically unchanged, and the direction of writing was free. From the 6th century, however, evolutions of the alphabet took place, guided by the phonology of the Etruscan language, and letters representing phonemes nonexistent in Etruscan were dropped. By 400 BC, it appears that all of Etruria was using the classical Etruscan alphabet of 20 letters, mostly written from left to right:

An additional sign 8 in shape similar to the numeral 8, transcribed as F, was present in both Lydian and Etruscan (Jensen 513). Its origin is disputed; it may have been an altered B or H or an ex novo creation (Rix 202). Its sound value was /f/ and it replaced the Etruscan FH. Some letters were, on the other hand, falling out of use: B and D were apparently considered superfluous over P and T. K was dropped in favour of G (also transcribed as C). O disappeared and was replaced by U. In the course of its simplification, the redundant letters showed some tendency towards a syllabary: C, K and Q were predominantly used in the contexts CE, KA, QU.

This classical alphabet remained in use until the 2nd century BC when it began to be influenced by the rise of the Latin alphabet. Soon after, the Etruscan language itself became extinct. Etruscan Alphabet