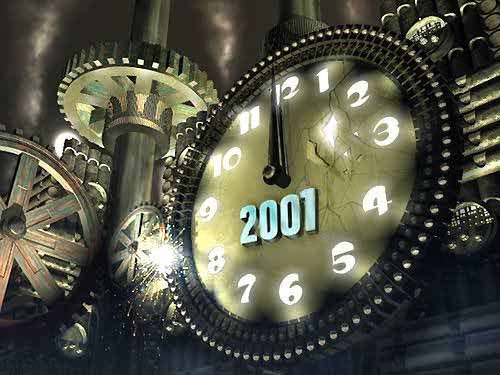 In discussions with metaphysical friends, we have independently all come to the same conclusion, the collective consciousness shifted on 9/11, creating a sense of limbo, non-reality, cocooning, stasis, disconnection, and in a bubble, months after the attack. In the aftermath of 9/11 people are rethinking their careers and life goals in light of a current economic crisis with war looming in the Middle East.

Becoming detached from another grid gives one a feeling of being lost. This is not easy for many souls, but is part of the process of the evolution of consciousness.

There may be a need to 'clean house' getting rid of things that no longer work. This signals that something new is happening and you have to prepare physically, mentally, spiritually and emotionally. The waiting feeling is for those working on their issues to catch up.

Each year will bring monumental changes on all levels in the Age of Technology and Spirituality as we move into prophecy.

There may be days when you will feel there is no reality at all as it appears to speed up and you find out more about who you are in all realms.

You are not going crazy.

You are not alone!

This holiday season does not have the energies of past years.

The Middle East crises continues as the scales remain unbalanced and each side fights for a cause they consider just. I watch children on TV shouting in the streets, young souls who have been indoctrinated by parents guided by their belief systems, some of which are not clear to them. In the years things grow far worse as Iraq and Saddam are destroyed. Here in my Brooklyn neighborhood there are many Middle Eastern families. When the Twin Towers fell some of these people celebrated in the streets, while others hide in their home fearful of retaliation by crazy neighbors.

Here in New York City, the energies of this holiday season are very low. People are trying to get into the holiday spirit, but it often isn't easy.

November seemed to drag on forever and Christmas is two weeks away.

There has been too much loss this year of lives, jobs, and the foundation of what we believe in.

My niece and her husband recently moved back into their apartment just across from the WTC. It used to be a choice place to live. They stayed with other family members for while, then decided they would move back. About half of the tenants have returned. There is a rent strike so no one is paying rent. Residents need passes to enter and are sometimes searched before the enter the buildings. It is like a war zone. They are looking to relocate but business has not been good this year, so they can't afford to move anywhere. They wonder if the ongoing smolder flames and acrid air will give them cancer in the long run.

Many of the usual year-end business Christmas parties have been canceled or not scheduled at all. Workers are still getting 'laid- off' as companies down-size. Other companies are going out of business, some of them having been around for years.

I also have noticed fewer decorations in local homes than in past years as if people are simply not in the mood to celebrate Christmas in New York..