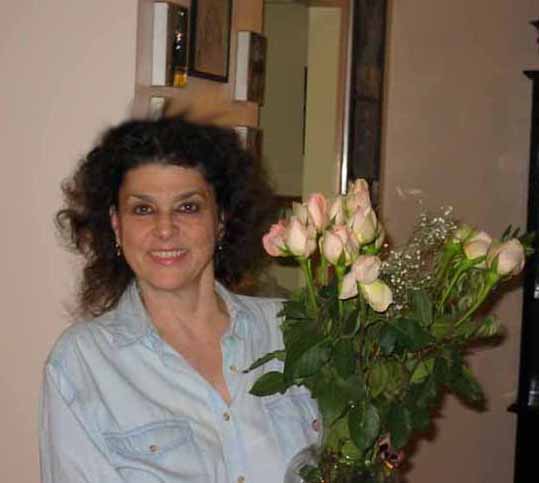 It's a funny thing about the plants and flowers in my home, the energies keep them alive for weeks. I decided to use my new digital camera when my friend Ron stopped by. I immediately knew the subject area of choice, the flowers in my home.

In the image above, I am holding flowers given to me two weeks ago for my birthday, by my cousin, Beth. They are almost exactly the same as they were the day I received them though I have done nothing but change the water. 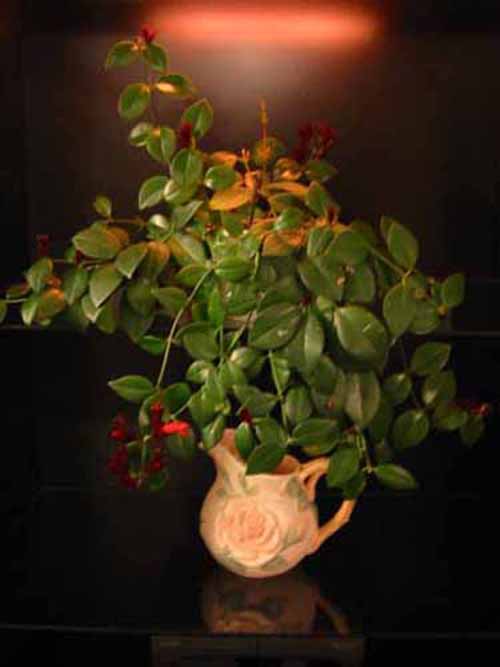 This plant has an interesting story. I found it last June in a local plant store, on a back shelf where it was dying, its leaves turning brown. It's called a Lipstick Plant. The owner of the store told me that these plant grow slow and may never bloom. He seem to be discouraging me from buying it. But my little plant called and I heard its cry. I brought it home and placed it on the top of a bookshelf to the right of where I work.

The weeks passed and the plant grew stronger. I soon placed it in a larger pot. It seems to look down over me and keep an 'eye' on things.

With the launching of my book Sarah and Alexander on March 3, 2003, 03/03/03, it spoke to me. "This marks a time of a new beginning, a new passage." Last week it began to bud in my favorite color these days, maroon.

Yesterday, before Ron arrived, the first flower inched its way through one of the buds. We placed the plant on a shelf in my living room to take these pictures. There are about 40 more flowers about to burst forth.

While Ron was here, I found some pages of automatic writing I had done in 1989-1990. They spoke about grids, pyramids, my path being guided through media, my book, the importance of the work I would do, Iraq and more. I hadn't looked at these notes for at least 10 years as they didn't make sense at the time. They totally spelled out what I have been doing and what lies ahead for me. Some of the messages were from friends who talk to Z. One of them drew an image of Z as a bird headed being long before I made the Thoth connection, around the time I became the "Psychic in the Pyramid". What a trip down Memory Lane.

My dreams Thursday night were about Rebirth. I slept 11 hours. I remember tossing and turning and seeing things as if in fast forward or virtual reality: Seeds growing, flowers opening, newborn babies, black and white images becoming full color, DNA lattices spiraling upward, my candy kisses morphing into something that looked like thin shimmering lines, string theory, angel hair, above and below, Hebrew letters in flames, the Lion, and a circle opening to become an omega symbol to allow for closure and rebirth.