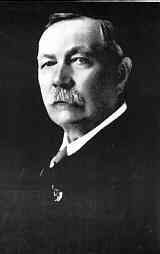 A period of natural convulsions during which a large portion of the human race will perish.

Earthquakes of great severity, enormous tidal waves would seem to be the agents.

War appears only in the early stages and appears to be a signal for the crisis to follow.

The crisis will come in an instant. The destruction and dislocation of civilized life will be beyond belief.

There will be a short period of chaos followed by some reconstruction; the total period of upheavals will be roughly three years.

The chief centers of disturbance will be the Eastern Mediterranean basin, where not less than five countries will entirely disappear.

Also in the Atlantic there will be a rise of land which will be a cause of those waves which will bring about great disasters upon the Americans, the Irish and Western European shore, involving all of the low-lying British coasts.

There are indicated further great upheavals in the southern Pacific and in the Japanese region.

Mankind can be saved by returning to its spiritual values.