Everything we do, everything that happens to us, is created by our genetic code combined with experience. It is all preset and activates from the moment of birth as if our script in the virtual reality consciousness experiment in which we experience. It all emanates from the center of the spiral, the eye of consciousness (god) through which we consciously enter reality at the physical level. 'Nebula' references new. Our experience is evolving into something more, the tones and archetypes emanating from the center (void, point of origin), a way to signal change at the soul level. There are also tones, recently detected, never heard before, emanating from the center of the Milky Way Galaxy. The Spiraling Movement of Consciousness 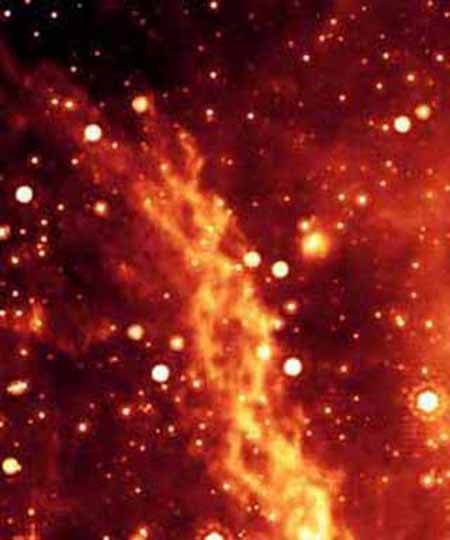 Astronomers report an unprecedented elongated double helix nebula near the center of our Milky Way Galaxy, using observations from NASA's Spitzer Space Telescope. The part of the nebula the astronomers observed stretches 80 light years in length.

/Users/elliecrystal/Desktop/Crystalinks/Archives/Archives 2006/divorce2006.html "We see two intertwining strands wrapped around each other as in a DNA molecule," said Mark Morris, a UCLA professor of physics and astronomy, and lead author. "Nobody has ever seen anything like that before in the cosmic realm. Most nebulae are either spiral galaxies full of stars or formless amorphous conglomerations of dust and gas - space weather. What we see indicates a high degree of order."

Offering another analogy, he said the wave is like what you see if you take a long loose rope attached at its far end, throw a loop, and watch the loop travel down the rope. "That's what is being sent down the magnetic field lines of our galaxy," Morris said. "We see this twisting torsional wave propagating out. We don't see it move because it takes 100,000 years to move from where we think it was launched to where we now see it, but it's moving fast Ń about 1,000 kilometers per second - because the magnetic field is so strong at the galactic center - about 1,000 times stronger than where we are in the galaxy's suburbs."

This magnetic field is strong enough to cause activity that does not occur elsewhere in the galaxy; the magnetic energy near the galactic center is capable of altering the activity of our galactic nucleus and by analogy the nuclei of many galaxies, including quasars, which are among the most luminous objects in the universe. All galaxies that have a well-concentrated galactic center may also have a strong magnetic field at their center, Morris said, but so far, ours is the only galaxy where the view is good enough to study it.

What launches the wave, twisting the magnetic field lines near the center of the Milky Way? Morris thinks the answer is not the monstrous black hole at the galactic center, at least not directly.

Orbiting the black hole like the rings of Saturn, several light years away, is a massive disk of gas called the circumnuclear disk; Morris hypothesizes that the magnetic field lines are anchored in this disk. The disk orbits the black hole approximately once every 10,000 years. "Once every 10,000 years is exactly what we need to explain the twisting of the magnetic field lines that we see in the double helix nebula," Morris said.

Co-authors on the Nature paper are Keven Uchida, a former UCLA graduate student and former member of Cornell University's Center for Radiophysics and Space Research; and Tuan Do, a UCLA astronomy graduate student. Morris and his UCLA colleagues study the galactic center at all wavelengths.