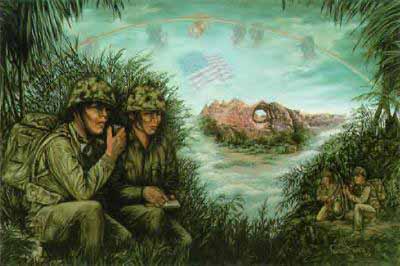 Code talkers were Native American soldiers who transmitted secret messages over radio or telephone using codes based on their native languages. The name refers chiefly to Navajo language speakers in special units in the Pacific Theater of World War II. However, the Choctaw language, Comanche language, and other languages were also used, beginning in World War I. In World War II the military (particularly the US Marines) used Navajo speakers for the first time. 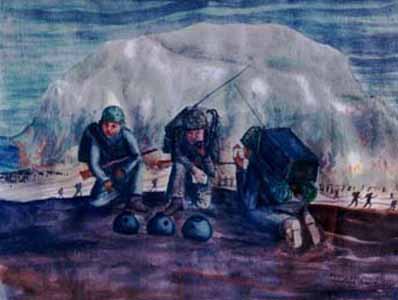 The Navajo code did not consist of merely speaking Navajo over a battlefield radio or wired link, but rather the code talkers developed several letter substitution codes in which each letter of an English message was converted to an English word starting with that letter, and then the Navajo translation of that word would be transmitted. In this way, anything expressible in English could, if necessary, be spelled out. For efficiency, a codebook was also developed for many relevant words and concepts.

A codetalker message would consist of some plain Navajo language, some code words (also in Navajo, but with special coded meaning), and, if necessary, some spelled out English words (with each letter being represented by a preselected Navajo word). To an ordinary Navajo speaker, the entire 'conversation' would have been quite incomprehensible. See the link at the end of the article to see the now-declassified codebook. The codetalkers memorized all these variations, and practiced their rapid use under stressful conditions.

The Japanese never cracked the spoken code, and high military officers have stated that the United States would never have won the Battle of Iwo Jima without the secrecy afforded by the code talkers. The codetalkers received no recognition until the declassification of the operation in 1968. In 1982, the code talkers were given a Certificate of Recognition by President Reagan, who also named August 14 "National Code Talkers Day."

Native American languages were chosen for several reasons. Most importantly, speakers of these languages were available inside the United States, and unavailable outside. In addition, the languages were virtually unknown outside the US. Hitler did know about the successful use of codetalkers during World War I, and sent a team of some thirty anthropologists to learn native American languages before the outbreak of World War II. However it proved too difficult to learn all the many languages and dialects that existed. Because of the German attempts to learn the languages, codetalkers were not assigned in large numbers to the European Theater.

Furthermore, an unfamiliar spoken human language is harder to crack than a code based on a familiar language. The languages chosen had little written literature, so even researching them was difficult for nonspeakers. In addition, nonspeakers would find it extremely difficult to accurately distinguish unfamiliar sounds used in these languages. Also, many grammar structures in these languages are quite different from any the enemies would be expected to know, adding another layer of incomprehensibility. In addition, a speaker who used the language all his life sounds distinctly different from a person who learned it in adulthood, thus reducing the chance of successful imposters sending false messages. Finally, the additional layer of an alphabet cypher was added to prevent interception by native speakers not trained as codetalkers, in the event of their capture by the Japanese.

The Navajo spoken code is not very complex by cryptographic standards, and would likely have been broken if a native speaker and trained cryptographers worked together effectively. The Japanese had an opportunity to do so when they captured Joe Kieyoomia in the Philippines in 1942. Kieyoomia, a Navajo Sergeant in the U.S. Army, was ordered to interpret the radio messages. They made no sense to him, and when he reported that he could not understand the messages, his captors tortured him. Given the simplicity of the alphabet code involved, it is probable that the code could have been broken easily if Kieyoomia's knowledge had been exploited more effectively by Japanese cryptographers.

The 2002 action film, Windtalkers starring Nicolas Cage, Adam Beach and Jason Isaacs, was based on the Navajo code talker operation of WWII, although it is not entirely historically accurate. Continue reading 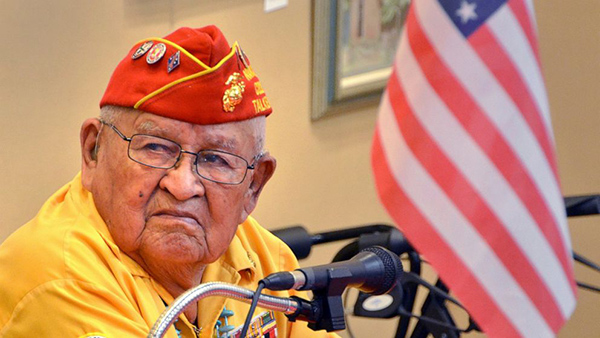 Samuel Sandoval, one of the last remaining Navajo Code Talkers who transmitted messages in World War II using a code based on their native language, has died. Sandoval died late Friday at a hospital in Shiprock, New Mexico. Their code is credited for winning the WWII. The Code Talkers had orders not to discuss their roles - not during the war and not until their mission was declassified in 1968. The roles later became an immense source of pride for Sandoval and his late brother, Merrill Sandoval, who also was a Code Talker. The two became talented speakers who always hailed their fellow Marines still in action as the heroes, not themselves 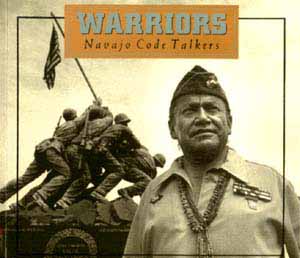