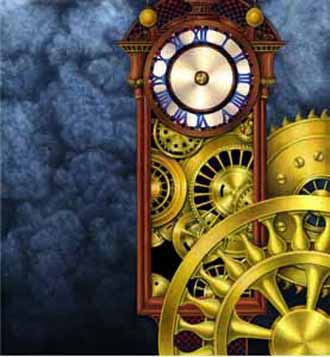 The "clockwork universe theory" compares the universe to a mechanical clock wound up by God and ticking along, as a perfect machine, with its gears governed by the laws of physics. What sets this theory apart from others is the idea that God's only contribution to the universe was to set everything in motion, and from there the laws of science took hold and have governed every sequence of events since that time. This idea was very popular among deists during the Enlightenment, when scientists realized that Newton's laws of motion, including the law of universal gravitation, could explain the behavior of the solar system.

Suggested arguments against this theory include: the concept of free will; the second law of thermodynamics (the total entropy of any isolated thermodynamic system tends to increase over time, approaching a maximum value); and quantum physics with its mathematical description of unpredictable, random behavior.

Isaac Newton has been recognized as a prominent opponent of the clockwork universe theory, though the theory has often been wrongly attributed to him. Edward B. Davis has acknowledged Newton's belief that the clockwork universe theory wrongly reduces God's role in the universe, as reflected in the writings of Newton-supporter Samuel Clarke. Responding to Gottfried Leibniz, a prominent supporter of the theory, in the LeibnizÅClarke correspondence, Clarke wrote:

"The Notion of the World's being a great Machine, going on without the Interposition of God, as a Clock continues to go without the Assistance of a Clockmaker; is the Notion of Materialism and Fate, and tends, (under pretence of making God a Supra-mundane Intelligence,) to exclude Providence and God's Government in reality out of the World."

A similar concept goes back, to John of Sacrobosco's early 13th-century introduction to astronomy: On the Sphere of the World. In this widely popular medieval text, Sacrobosco spoke of the universe as the machina mundi, the machine of the world, suggesting that the reported eclipse of the Sun at the crucifixion of Jesus was a disturbance of the order of that machine. This conception of the universe consisted of a huge, regulated and uniform machine that operated according to natural laws in absolute time, space, and motion. God was the master-builder, who created the perfect machine and let it run. God was the Prime Mover, who brought into being the world in its lawfulness, regularity, and beauty. This view of God as the creator, who stood aside from his work and didnít get involved directly with humanity, was called Deism (which predates Newton) and was accepted by many who supported the 'new philosophy'. Clockwork Universe Theory