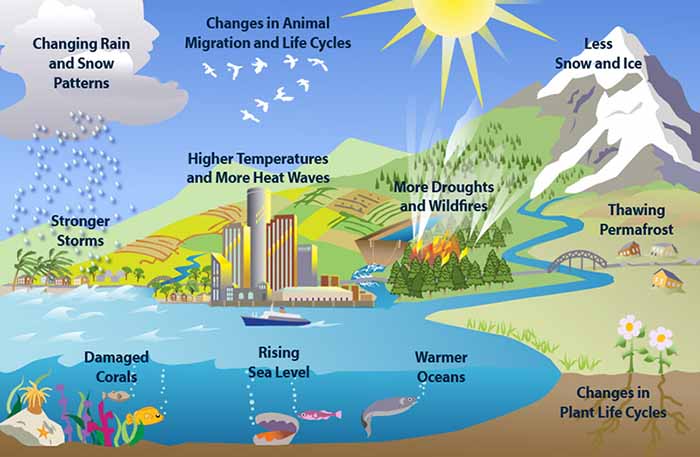 Climate is the long-term pattern of weather in a particular area. It is measured by assessing the patterns of variation in temperature, humidity, atmospheric pressure, wind, precipitation, atmospheric particle count and other meteorological variables in a given region over long periods of time. Climate is different from weather, in that weather only describes the short-term conditions of these variables in a given region.

A region's climate is generated by the climate system, which has five components: atmosphere, hydrosphere, cryosphere, lithosphere, and biosphere.

The climate of a location is affected by its latitude, terrain, and altitude, as well as nearby water bodies and their currents. Climates can be classified according to the average and the typical ranges of different variables, most commonly temperature and precipitation. The most commonly used classification scheme was originally developed by Wladimir Koppen. The Thornthwaite system, in use since 1948, incorporates evapotranspiration along with temperature and precipitation information and is used in studying animal species diversity and potential effects of climate changes. The Bergeron and Spatial Synoptic Classification systems focus on the origin of air masses that define the climate of a region.

Paleoclimatology is the study of ancient climates. Since direct observations of climate are not available before the 19th century, paleoclimates are inferred from proxy variables that include non-biotic evidence such as sediments found in lake beds and ice cores, and biotic evidence such as tree rings and coral. Climate models are mathematical models of past, present and future climates. Climate change may occur over long and short timescales from a variety of factors; recent warming is discussed in global warming. Read more ...

Climate Change Has Been Killing Rainforest Trees For Longer Than We Realized   Science Alert - May 21, 2022
Scientists have documented a worrying trend in the rainforests of Australia: Tree lifespans have halved in the last 35 years, and it appears to be due to the effects of climate change on the ecosystems. With these forests acting as significant carbon sinks, the consequences for the planet could be devastating, creating a feedback loop that's both caused by global warming and which then contributes to it


Climate has shifted the axis of the Earth   PhysOrg - April 23, 2021
Glacial melting due to global warming is likely the cause of a shift in the movement of the poles that occurred in the 1990s.


Earth barreling toward 'Hothouse' state not seen in 50 million years, epic new climate record shows   Live Science - September 11, 2020
Sixty-six million years ago, after a massive asteroid hit Earth with the explosive energy of roughly 1 billion nuclear bombs, a shroud of ash, dust and vaporized rock covered the sky and slowly rained down on the planet. As plant and animal species died en masse, tiny undersea amoebas called foreams continued to reproduce, building sturdy shells out of calcium and other deep-sea minerals, just as they had for hundreds of millions of years. When each foream inevitably died - pulverized into seabed sediment - they kept a little piece of Earth's ancient history alive in their fossilized shells.


Climate is warming faster than it has in the last 2,000 years   Science Daily - July 24, 2019
Two new studies show that the 20th century was the Earth's warmest period recorded in 2,000 years of the planet's record.The studies further indicate that global warming was manmade because the warming trend began after the industrial revolution, according to climate scientist Julien Emile-Geay, associate professor of Earth sciences at USC Dornsife College of Letters, Arts and Sciences and a co-author of one of the studies.


America colonization Ôcooled Earth's climateŐ   BBC - January 31, 2019
Colonization of the Americas at the end of the 15th Century killed so many people, it disturbed Earth's climate. The disruption that followed European settlement led to a huge swathe of abandoned agricultural land being reclaimed by fast-growing trees and other vegetation. This pulled down enough carbon dioxide from the atmosphere to eventually chill the planet. It's a cooling period often referred to in the history books as the "Little Ice Age" - a time when winters in Europe would see the Thames in London regularly freeze over. The Great Dying of the Indigenous Peoples of the Americas led to the abandonment of enough cleared land that the resulting terrestrial carbon uptake had a detectable impact on both atmospheric carbon dioxide and global surface air temperatures.


Get Used to Nor'easters - Arctic Warming May Mean More Severe Winters in the Northeast   Live Science - March 16, 2018
As average temperatures rise across the planet, the frozen Arctic is heating up faster than anywhere else. With that warmth comes a surprising twist: Unusually warm Arctic winter temperatures are linked to bitter cold and snow in other parts of the Northern Hemisphere, such as the northeastern U.S., parts of northern Europe and northern Asia, according to an analysis of 66 years worth of climate data. And the relationship between Arctic warmth and severe winter weather was strongest in in the northeastern U.S. - in fact, a temperature spike in the Arctic meant that the U.S. Northeast was two to four times more likely than usual to experience a bout of extreme winter weather, the scientists reported in a new study.