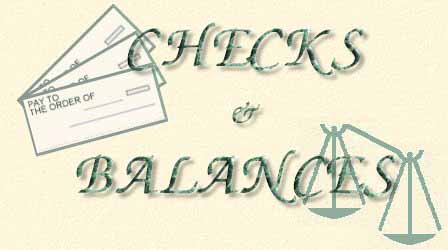 Reality is a game of checks and balances, positives and negatives, trying to keep things balanced to a point.

Politically - To prevent one branch from becoming supreme, and to induce the branches to cooperate, governance systems employing a separation of powers typically are created with a system of "checks and balances", a term which, like separation of powers itself, is generally credited to Montesquieu. Checks and balances refers to the various procedural rules which allow one branch to limit another, such as the authority of the American President to veto legislation passed by Congress, or the power of Congress to alter the composition and jurisdiction of the federal courts. Each country employing a separation of powers will have its own system of checks and balances; the closer a country lies to the presidential end of the continuum, the more checks that will likely exist between the branches, and the more equal the branches will be in relative powers.