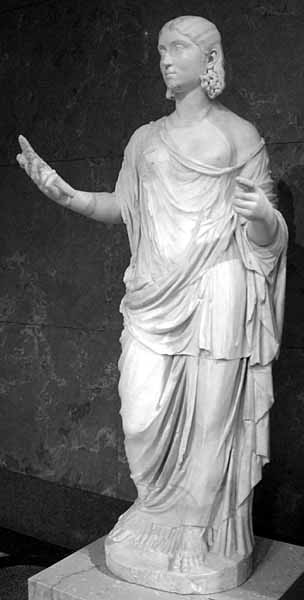 Ceres, in Roman mythology, was equivalent to the Greek Demeter, daughter of Saturn and Rhea, wife-sister of Jupiter, mother of Proserpina by Jupiter, sister of Juno, Vesta, Neptune and Pluto, and patron of Sicily.

Ceres was a goddess of agriculture, grain crops, fertility and motherly relationships. She was originally the central deity in Rome's so-called plebeian or Aventine Triad, then was paired with her daughter Proserpina in what Romans described as "the Greek rites of Ceres". Her seven-day April festival of Cerealia included the popular Ludi Ceriales (Ceres' games). She was also honored in the May lustration of fields at the Ambarvalia festival, at harvest-time, and during Roman marriages and funeral rites.

Ceres is the only one of Rome's many agricultural deities to be listed among the Di Consentes, Rome's equivalent to the Twelve Olympians of Greek mythology. The Romans saw her as the counterpart of the Greek goddess Demeter, whose mythology was reinterpreted for Ceres in Roman art and literature.

Ceres is said to have been adopted by the Romans in 496 BC during a devastating famine, when the Sibylline books advised the adoption of the Greek goddesses Demeter, Kore (Persephone) and Iacchus (possibly Dionysus).

She was personified and celebrated by women in secret rituals at the festival of Ambarvalia, held during May. There was a temple to Ceres on the Aventine Hill in Rome. Her primary festival was the Cerealia or Ludi Ceriales ("games of Ceres"), instituted in the 3rd century BC and held annually on April 12 to April 19.

The worship of Ceres became particularly associated with the plebeian classes, who dominated the corn trade. Little is known about the rituals of Cerelean worship; one of the few customs which has been recorded was the peculiar practice of tying lighted brands to the tails of foxes which were then let loose in the Circus Maximus.

She had twelve minor gods who assisted her, and were in charge of specific aspects of farming: "Vervactor who turns fallow land, Reparator who prepares fallow land, Imporcitor who plows with wide furrows" (whose name comes from the Latin imporcare, to put into furrows), "Insitor who sowed, Obarator who plowed the surface, Occator who harrowed, Sarritor who weeded, Subruncinator who thinned out, Messor who harvested, Conuector who carted, Conditor who stored, and Promitor who distributed". 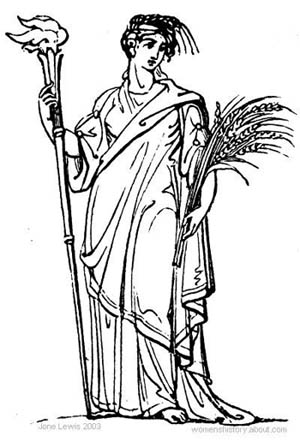 She was depicted in art with a scepter, a basket of flowers and fruit, and a garland made of wheat ears.

The word cereals derives from Ceres, commemorating her association with edible grains. The name Ceres comes from the Indo-European root "ker", meaning "to grow", which is also the root for the words "create" and "increase".

The asteroid Ceres is named after this goddess, and subsequently a chemical element was named Cerium in turn. Ceres had begged Jupiter that Sicily be placed in the heavens; the result, because the island is triangular in shape, was the constellation Triangulum, an early name of which was Sicilia.