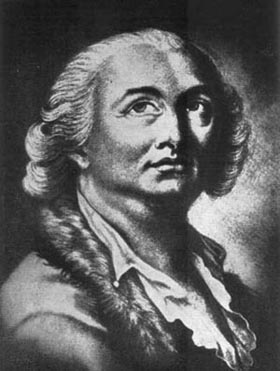 Count Alessandro di Cagliostro (June 2, 1743 - August 26, 1795) was a traveller, occultist and Freemason. "Cagliostro" is widely held to have been an alias for the charlatan Giuseppe Balsamo, born to a poor family in Palermo, Sicily. Balsamo was a petty criminal who, in his most famous crime, claimed aptitude in alchemy to swindle a man out of his gold. The identification of Cagliostro with Giuseppe is not certain, however, being based mainly upon the untrustworthy testimony of the French spy and blackmailer Theveneau de Morande, and later upon his confession to the Inquisition, obtained through torture.

Cagliostro himself claimed to have been born of Christians of noble birth, but abandoned as an orphan upon the island of Malta. He claimed to have travelled as a child to Medina, Mecca, and Cairo, and upon return to Malta to have been initiated into the Sovereign Military Order of the Knights of Malta, with whom he studied alchemy, the Kabbalah and magic. He founded the Egyptian Rite of Freemasonry in The Hague, which initiated men and women in separate lodges and had an influence on the foundation of the masonic Rite of Misraim.

What is known about Cagliostro is that he became well-known in Naples and later Rome, where he met and married his wife Lorenza Feliciani.

They traveled together to London, where he was initiated into Freemasonry, possibly by the Comte de Saint-Germain.

He adopted as his secret sign the symbol of Ouroboros; the snake that bites its own tail.

He soon founded the Egyptian Rite of Freemasonry in The Hague, which initiated men and women in separate lodges and had an influence on the foundation of the masonic Rite of Misraim.

He traveled throughout Russia, Germany, and later France, spreading the influence of the Egyptian Rite and also claiming to be a magnetic healer of great power.

His fame grew to the point that he was even recommended as a physician to Benjamin Franklin during a stay in Paris.

He was an extraordinary forger. In his autobiography, Giacomo Casanova narrates an encounter with Cagliostro who was able to forge a letter of Casanova despite being unable to understand it.

Occult historian Lewis Spence comments in his entry on Cagliostro that the swindler put his finagled wealth to good use by starting and funding a chain of maternity hospitals and orphanages around the continent.


Affair of the diamond necklace

He was prosecuted in the affair of the diamond necklace which involved Louis XVI of France and Marie Antoinette, and was imprisoned in France for fraud. He was held in the Bastille for nine months, but finally acquitted, when no evidence could be found connecting him to the affair. Nonetheless, he was asked to leave France, and left for England. This was where he was accused by Theveneau de Morande of being Giuseppe Balsamo, which he refuted in his Open letter to the English People, forcing a retraction and apology from Morande.

Cagliostro left England to visit Rome, where he met two people who asked him to initiate them into the Egyptian Rite. However, they proved to be spies of the Inquisition. Some accounts hold that his wife was the one who initially betrayed him to the Inquisition.