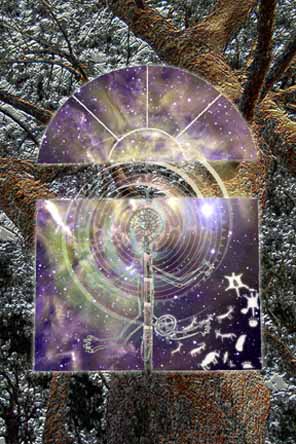 Before Pat and I left for Europe, we meditated on the trip and saw swirls of energy along the way. My friend Marcus calls them Time Swirls. Like the image above they are the iconographic motif of the logarithmic spiral found throughout the planet since early man starting decorating cave walls. Reality is we know is the sacred geometry of humanity's journey into awareness.


On this day we joined friends, Nicole and Andy in the Black Forest.

Nicole and I have been friends since 1988 when we met in Sue Reeve's psychic development classes in Brooklyn. Common themes linked Nicole and I to WW II Germany, the Nazi Labs, Tim Travel, and more. Nicole helped me with the first draft of Sarah and Alexander in 1989. She is currently 33 years old and starting her PhD. program in Anthropology at the University of Wisconsin, in Madison. She and Andy met in Chicago where she was teaching and working for the Oriental Institute.


Prior to Nicole and Andy coming to Freiburg, they flew to Berlin. Nicole wrote ...

Going to Germany and Belgium was the equivalent of a long awaited trip back home. Indeed, when I first started writing this post, I initially typed, "Going back!" Yet, this was my first trip to Germany and my first trip to Europe for that matter. The trip we took circled through Germany via Frankfurt, Berlin, Freiburg, and Brussels. This was a trip filled with travel, adventures, and most importantly, reminders regarding the past and how integrated all events are into the present and the future. Understanding how looping works is a very important concept, on an individual, societal, and global level. One of the most important manifestations of looping was during a fantastic four-hour walking tour that Andy and I took in Berlin. 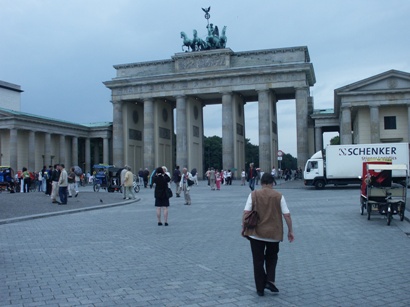 We started the four hour walking tour at Brandenburg Gate, and thereby circled through the major historical areas of Berlin. There were so many incredible sites, thick with history, far too many to list. One of our first major stops was Hitler's Bunker, which has subsequently been converted into condominiums (the surrounding area) and a children's play lot/sandlot (directly on top of the bunker). It is here that the reminder of looping and patterns in time really took off. 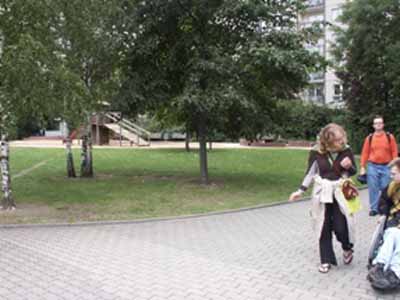 This is a picture of a bench that is situated right on Hitler's bunker (which is currently a children's sandlot).

The name "Alexander", as in Sarah and Alexander, is clearly etched into the bench, with the letters AEXA to the right of it. 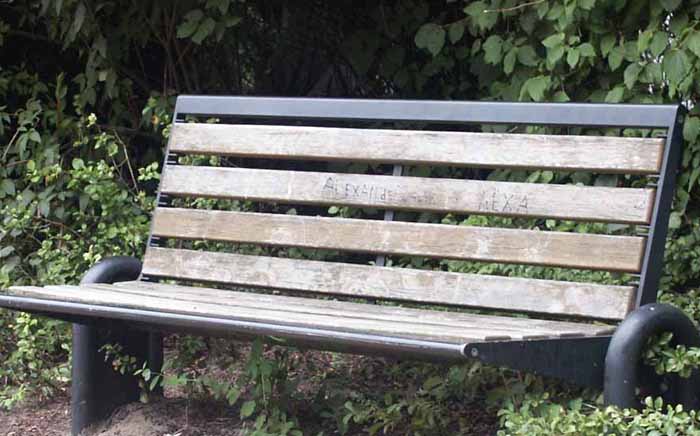 Cal, our tour guide, took us through the last few hours of Hitler's demise with his thick description. It was at this site that Hitler's downfall spiraled out of control. Just a stone's throw away sits the Memorial to the Murdered Jews in Europe, a both beautiful and somber reminder of the genocide that took place during that time.

One of the most profound loops/connection was the controversy that surrounds this memorial site. This site, with its 2,711 stele and undulating walkways is a monument to suffering, anonymity, and somber reflection. It pays reverence to the psychological, emotional, and "spiritual" turmoil experienced by those who suffered during this period of "time." Cal himself noted how things "loop" around, are intertwined with one another, and for all intents and purposes, cannot be separated.

He made a note of pointing out why there is so much controversy regarding this site: his point was that even the site itself, one that pays respect to murdered Jews, one of the major companies involved is financially linked to the Nazi administration.

Even more disturbing, this same company that was financially linked to the Nazis, one of its major financial backers was former Senator Prescott Bush, current U.S. President George W. Bush's grandfather. Therefore, the Bush dynasty has in some way, shape or form, indirectly (or directly) profited from Nazi activities.

This illustrates how the archetypal symbol of circles and looping is fundamentally important to understanding human patterns of both time and our own actions. The point that history (human actions and activities) keeps looping, continually repeats itself, points to how humans understand time and its lessons in painfully limited forms. 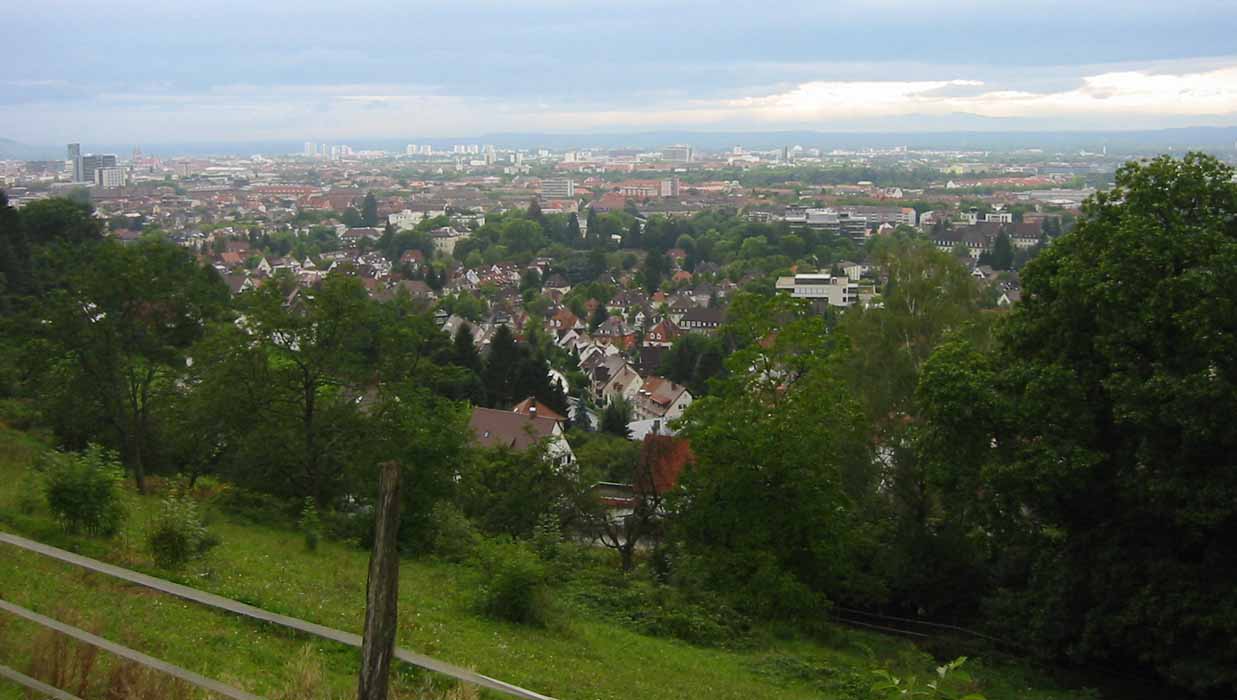 Pat and I met Nicole and Andy in Freiburg for breakfast before taking off to the Black Forest. On a cool crisp day we parked at the base of a tree and got out. The energies of nature always are inspirational and filled with messages if you are tuned in enough to get them. We slowly climbed up the hillside, a stream to our right, a wooden log serving as a footbridge over the stream.

Pat in the Black Forest 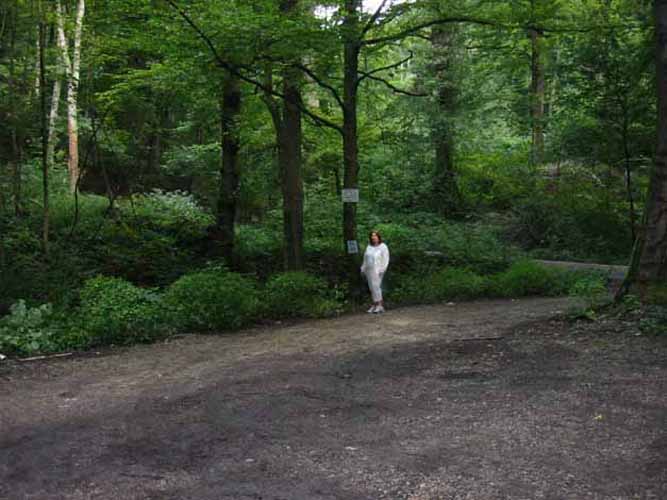 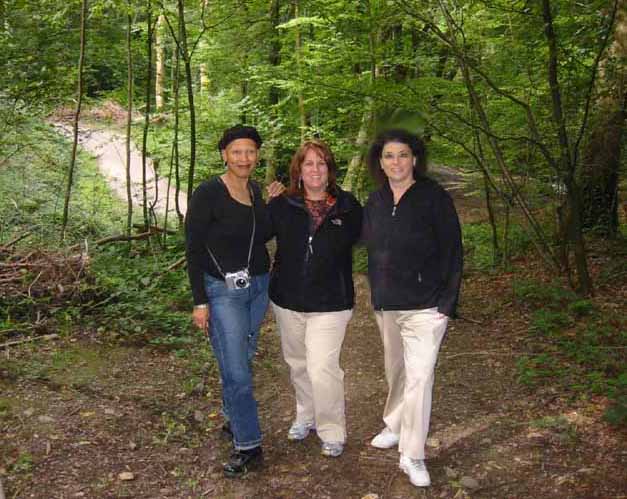 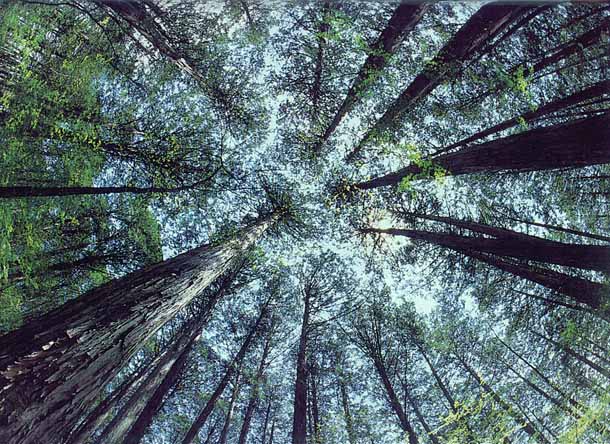 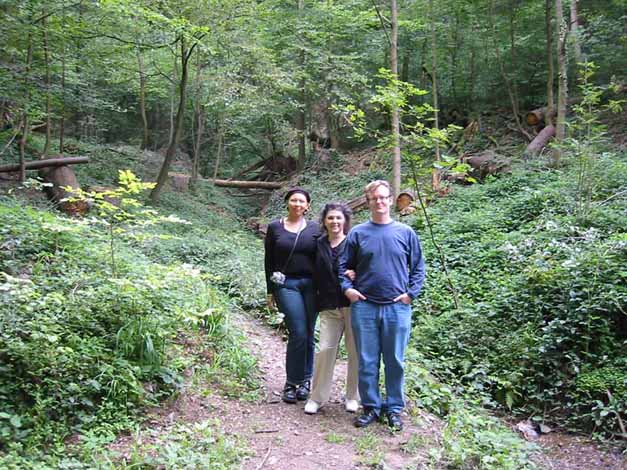 After a while, Pat and Nicole walked back to the area where we had parked while Andy and I remained above. We turned to face Pat and Nicole, the stream now to our left. We stood there silently.

Suddenly I felt Marcus' energies. I looked at my watch, 11:11 am - 7:11 am Pacific Time where he lived. Andy mentioned that he felt a strange sensation at the back of his head. Then I saw Marcus "come into" him (merged grids) as Andy described what I saw. Andy didn't seem fearful or confused by the experience, just describing what he was experiencing, as if seeming to know he had to be there.

We physically heard the sounds of gears turning. These were the same sounds heard in upstate New York on Good Friday, April 2004 with Pat, Marcus, and Ron.

Andy, was unable to place the source of the sounds, thinking they may be a buzz saw but none was within our vicinity. For me these were the gears of time recalibrating. In that moment I realized that once again it took the energies of a male and a female to create change, balance of polarities, and why Andy had to be there. The male would have to match my frequency, if only energetically. Though it was Marcus I connected with Andy was the vehicle through which he worked, if only for a few minutes. Andy and I felt complete as we walked back to where our friends were to share our experience.

There in the black forest something was set in motion that would lead to the
"Fade to Black Moment" when times ceases to exist and the simulation ends.


I drove Nicole and Andy to the Freiburg train station as they headed off for further adventures in Brussels. Just after we dropped them off, Pat and I drove past four cast iron spiral sculptures, or cones, on the city square not far from the university. Before the trip, Pat kept seeing spirals pointing downward and was elated when we found these. I could not stop the car long enough for Pat to capture all four spirals, but she photographed two. 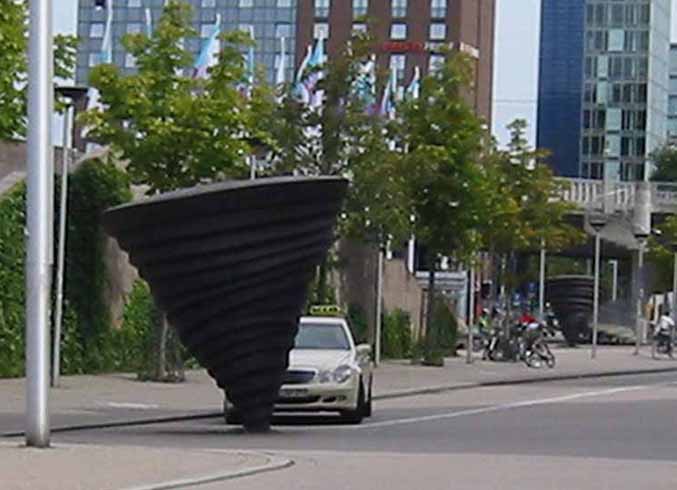 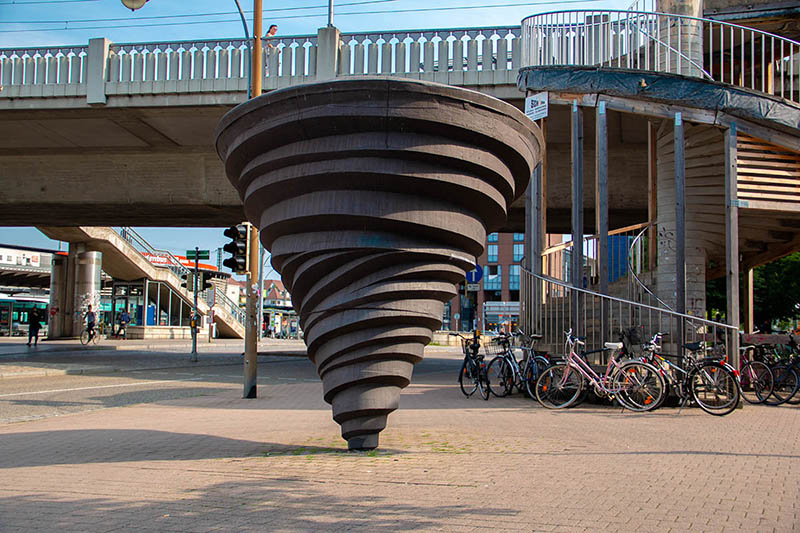 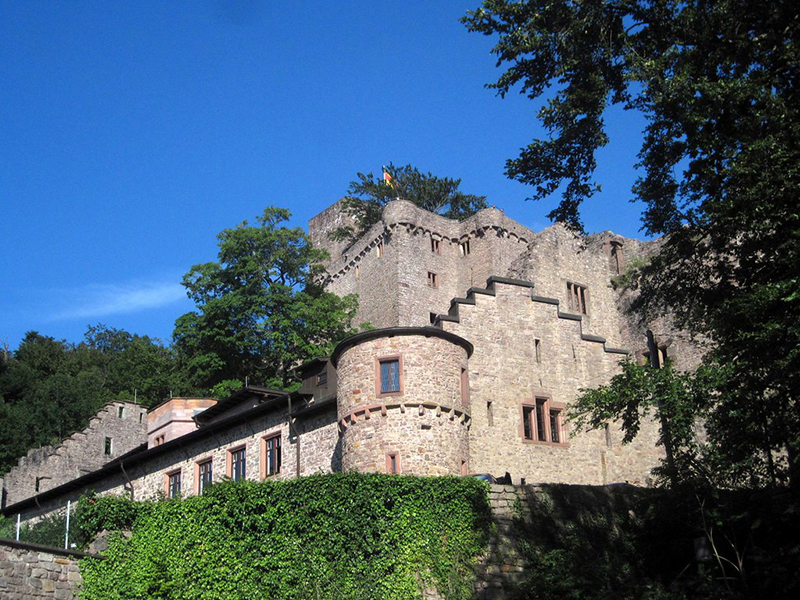