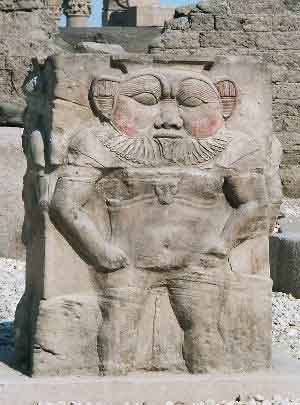 Bes (also spelt as Bisu) was an Egyptian deity worshipped in the later periods of dynastic history as a protector of households and in particular mothers and children. In time he would be regarded as the defender of everything good and the enemy of all that is bad. While past studies identified Bes as a Middle Kingdom import from Nubia, some more recent research believes him to be an Egyptian native. Mentions of Bes can be traced to the southern lands of the Old Kingdom; however his cult did not become widespread until well into the New Kingdom.

His name appears to be connected to a Nubian word for "cat" (besa) which literally means "protector", and indeed, his first appearances have the suggestion of a cat god[citation needed]. Egyptians kept cats in order to attack snakes, and creatures that might ruin crop stores, such as mice, and so Bes was naturally singled out as worthy of worship in Egypt.

He is also known as a comic dwarf god that brings good luck and happiness to homes. 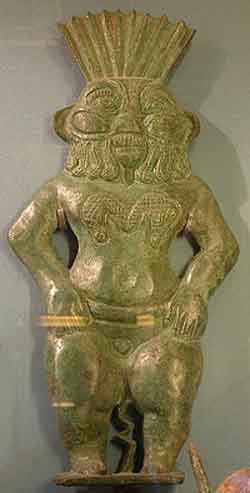 Modern scholars such as James Romano demonstrated that in its earliest inceptions, Bes was a representation of a lion rearing up on its hind legs.

After the Third Intermediate Period, Bes is often seen as just the head or the face, often worn as amulets. It is theorized that the god Bes came from the Great Lakes Region of Africa, coming from the Twa people (a pygmy group) in Congo or Rwanda. The ancient Twa were about the same height as the depictions of Bes. Dawn Prince-Hughes lists Bes as fitting with other archetypal long-haired Bigfoot-like ape-man figures from ancient Northern Africa, "a squat, bandy-legged figure depicted with fur about his body, a prominent brow, and short, pug nose."

Another theory born out by Bes's role in both the protection of children and women in labor is the theory that Bes is the figure of an miscarried fetus.

Images of the deity were kept in homes he was depicted quite differently from the other gods. Normally Egyptian gods were shown in profile, but instead Bes appeared in portrait, ithyphallic, and sometimes in a soldier's tunic, so as to appear ready to launch an attack on any approaching evil.

Since he drove off evil, Bes also came to symbolize the good things in life - music, dance, and sexual pleasure. Later, in the Ptolemaic period of Egyptian history, chambers were constructed, painted with images of Bes and his wife Beset, thought by Egyptologists to have been for the purpose of curing fertility problems or general healing rituals.

Many instances of Bes masks and costumes from the New Kingdom and later have been uncovered. These show considerable wear, thought to be too great for occasional use at festivals, and are therefore thought to have been used by professional performers, or given out for rent.

In the New Kingdom, tattoos of Bes could be found on the thighs of dancers, musicians and servant girls. Like many Egyptian gods, the worship of Bes was exported overseas, and he, in particular, proved popular with the Phoenicians and the ancient Cypriots.

The cult of Saint Bessus in northern Italy may represent the Christianization of the cult associated with Bes; St. Bessus was also invoked for fertility, and Bessus and Bes are both associated with an ostrich feather in their iconography.

As another form of protection, an image of the dwarf god was tattooed on some women - different depictions of women, such as girls swimming, female dancers, acrobats and musicians, show them with Bes painted on their skin. The women with the image of Bes tattooed on her upper thigh an around the pubic area might be Egyptian prostitutes, the tattoo being used to ward off venereal disease. This was probably because of his association with music and entertainment, as well as being a protector of women and children. It could have also been a tattoo relating to sexuality or fertility.

The Egyptians also saw Bes as one who not only protected but entertained children - when a child smiled for no reason, it was thought that Bes was pulling faces at the child to make him or her laugh! He was thought to entertain through dancing and singing, and so he was also thought to be a god of happiness and joviality.

Despite his fun-loving nature, he was also regarded as a god of war from early times. He used his lion-like, ferocious nature to destroy or scare the enemies of pharaoh, as well as the evil spirits that were thought to plague the people of Egypt (including sickness, dangerous creatures and other such troubles). He was thought to be especially protective of women and children.

It was during the Greek Period that the worship of Bes became wide-spread - the numbers of amulets and charms, as well as reliefs at the temples show how popular the 'Great Dwarf' became. There were even oracles of Bes, to whom the people would ask questions, on papyrus, for Bes to give an answer to their problems. In Roman times, the god was adopted by the Roman people, and there are some figurines of him in legionnaire garb. 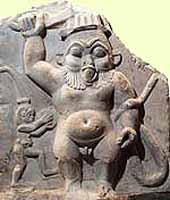 He was not a god of Egyptian origin. Bes was described as 'Coming from the Divine Land' and 'Lord of Punt' (perhaps an area in present day Somalia - see Hatshepsut's Expedition to Punt). He was thus linked to the goddess Hathor who was known as the 'Lady of Punt' and also a goddess of music. During this period, he was given a wife, known as Beset - a female version of the dwarf god, presiding over protection, pleasure and childbirth. The two did not appear together before the Ptolemaic era.

There is an interesting tale about Bes, still mentioned today:

After the triumph of Christianity Bes did not immediately vanish from the memory of man; for we are told of a wicked demon named Bes whom the holy Moses had to exorcise because he was terrorizing the neighborhood. To this day, it would seem, the monumental southern gate of Karnak serves as a dwelling-place for a knock-kneed dwarf whose gross head is embellished with a formidable beard. Woe to the stranger who, coming across him in the dusk of evening, laughs at his grotesque figure! For the monster will leap at his throat and strangle him. He is the Bes of ancient Egypt who, after long centuries, is not yet resigned to abandoning altogether the scenes of his earlier greatness.

Bes had no temples and no priesthood other than his oracle, but statues or depictions of the god was found in most homes throughout the land of Egypt. Although not originally one of the more famous of the gods, Bes came to be loved by the people of Egypt. It was the dwarf god-demon Bes that they came to call on for protection in their daily lives.