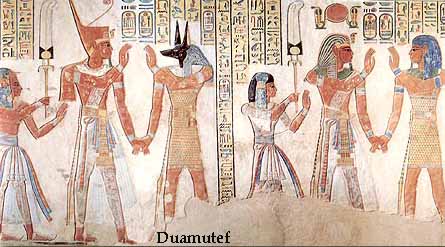 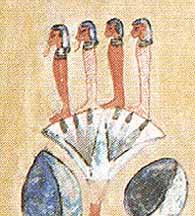 In Egyptian mythology, Duamutef (also known as Tuamutef) was one of the Four sons of Horus and a funerary god who protected the stomach and small intestines of mummified corpses, kept in a canopic jar. He was associated with the jackal and was protected by the goddess Neith.Duamutef is represented as a mummified man with the head of a jackal. His name is generally transcribed as Duamutef, and means 'Adoring His Mother'.

By all other animals he was feared because of his vengeful spirit and the tendency to hunt. The goddess Neith disowned him and bound him in chains where a great lion was called to kill him. After he died he was given the duty to protect one of the canopic jars. 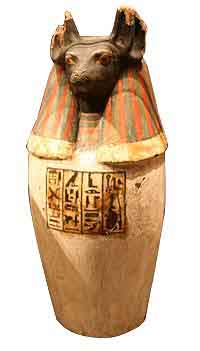 Ra the sun god later gave him the power to betray Neith, for some unknown reason, and Duamutef killed Neith with the jaws of The Great Lion that killed him.

Neith descended into the underworld and sweared revenge against Duamutef. Neith plotted to leave the underworld by resurrecting souls and making Anubis angry however Neith was forced to make a deal with Anubis, but she would later betray him. After seven years of forging Neith forged a sword that could kill any mortal or immortal. Duamutef caught word of this and challenged Neith.

Duamutef knew the power of the sword and was given a weapon by Anubis called the Bow of Fatality . In a valley the battle ensued between the Sword of Eternity and the Bow of Fatality. Neith won the battle but was bound by blood to keep Duamutef alive, completely ignoring the agreement she stabbed Duamutef but when the blade struck him it shattered into hundreds of pieces.

Realizing that she herself could not kill him because of the agreement with Anubis, she knocked him unconscious and tossed him into a nearby swamp. As much as he struggled Duamutef could not escape. Drowning killed Duamutef and sent him back to the underworld. Stripped of his power by Ra, (who realized his treachery and not Neith's) he was condemned to protect the stomach inside a canopic jar.

Neith, astonished by Ra's decision, was shunned by the other gods because of her treachery.