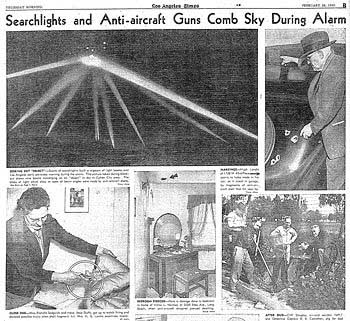 It is not unusually to see UFOs during war time, though no one is quite sure if they are monitoring events or trying to prevent a global catastrophe. On February 24-25, 1942, something happened over Los Angeles witnessed by millions of people and the media as the US Air Force attacked glowing light in the sky, its origins unknown. Was it advanced enemy aircraft or a UFO? As always, the government covered up the incident, but those that witnessed the events know what they saw.

The Battle of Los Angeles, also known as '"The Great Los Angeles Air Raid"', is the name given by contemporary sources to the imaginary enemy attack and subsequent anti-aircraft artillery barrage which took place from late February 24 to early February 25, 1942 over Los Angeles, California. The incident occurred less than three months after America's entry into World War II as a result of the Japanese Imperial Navy's attack on Pearl Harbor.

Initially, the target of the aerial barrage was thought to be an attacking force from Japan, but speaking at a press conference shortly afterward Secretary of the Navy Frank Knox called the incident a "false alarm." Newspapers of the time published a number of sensational reports and speculations of a cover-up. A small number of modern-day UFOlogists have suggested the targets were extraterrestrial spacecraft. When documenting the incident in 1983, the U.S. Office of Air Force History attributed the event to a case of "war nerves" likely triggered by a lost weather balloon and exacerbated by stray flares and shell bursts from adjoining batteries.

Air raid sirens were sounded throughout Los Angeles County on the night of February 24-25, 1942. A total blackout was ordered and thousands of air raid wardens were summoned to their positions. At 3:16 a.m. the 37th Coast Artillery Brigade began firing 12.8-pound anti-aircraft shells into the air at reported aircraft; over 1,400 shells would eventually be fired.

Pilots of the 4th Interceptor Command were alerted but their aircraft remained grounded. The artillery fire continued sporadically until 4:14 a.m. The "all clear" was sounded and the blackout order lifted at 7:21 a.m. In addition to several buildings damaged by friendly fire, three civilians were killed by the anti-aircraft fire, and another three died of heart attacks attributed to the stress of the hour-long bombardment. The incident was front-page news along the U.S. Pacific coast, and earned some mass media coverage throughout the nation.

Within hours of the end of the air raid, Secretary of the Navy Frank Knox held a press conference, saying the entire incident was a false alarm due to anxiety and "war nerves". Knox's comments were followed by statements from the Army the next day that reflected General George C. Marshall's belief that the incident might have been caused by commercial airplanes used as a psychological warfare campaign to generate panic.

Some contemporary press outlets suspected a cover up. An editorial in the Long Beach Independent wrote, "There is a mysterious reticence about the whole affair and it appears that some form of censorship is trying to halt discussion on the matter." Speculation was rampant as to invading airplanes and their bases. Theories included a secret base in northern Mexico as well as Japanese submarines stationed offshore with the capability of carrying planes. Others speculated that the incident was either staged or exaggerated to give coastal defense industries an excuse to move further inland.

Representative Leland Ford of Santa Monica called for a Congressional investigation, saying, "...none of the explanations so far offered removed the episode from the category of 'complete mystification' ... this was either a practice raid, or a raid to throw a scare into 2,000,000 people, or a mistaken identity raid, or a raid to lay a political foundation to take away Southern California's war industries."