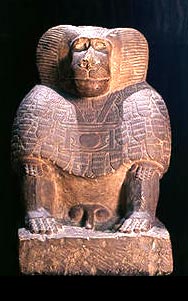 In Egyptian mythology, Babi was the deification of the baboon, one of the main animals present in Egypt, and it is thought that from his name we get the word baboon. His name is usually translated as Bull of the baboons, and roughly means Alpha male of all baboons, i.e. chief of the baboons.

Since Baboons exhibit many human characteristics, it was believed in early times, at least since the Predynastic Period, that they were deceased ancestors. In particular, the alpha males were identified as deceased rulers, referred to as the great white one (Hez-ur in Egyptian), since Hamadryas baboon (the species prevalent in Egypt) alpha males have a notable light grey streak. For example, Narmer is depicted in some images as having transformed into a baboon.

Consequently, he was viewed as devouring the souls of the unrighteous after they had been weighed against Ma'at (the concept of truth/order), and was thus said to stand by a lake of fire, representing destruction. Since this judging of righteousness was an important part of the underworld, Babi was said to be the first born son of Osiris, the god of the dead amongst the same areas as Babi was believed in.

Baboons also have noticeably high sex drives, in addition to their high level of genital marking, and so Babi was considered the god of virility of the dead. He was usually portrayed with an erection, and due to the association with the judging of souls, was sometimes depicted as using it as the mast of the ferry which conveyed the righteous to Aaru, a series of islands. Babi was also prayed to, in order to ensure that an individual would not suffer from impotence after death.