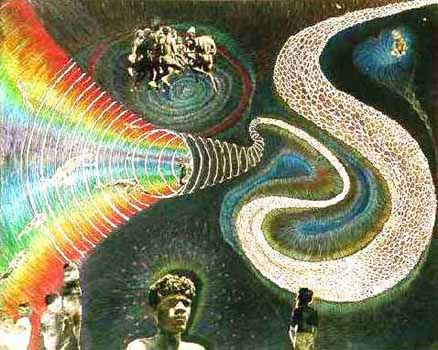 There is no single creation story among Aboriginal peoples, who have a diverse mythology. Some traditions hold that the Earth was created by one of the gods of the Dreamtime, others that particular creatures were created by particular gods or spirit ancestors.

In the beginning the earth was a bare plain. All was dark. There was no life, no death. The sun, the moon, and the stars slept beneath the earth. All the eternal ancestors slept there, too, until at last they woke themselves out of their own eternity and broke through to the surface.

When the eternal ancestors arose, in the Dreamtime, they wandered the earth, sometimes in animal form - as kangaroos, or emus, or lizards -- sometimes in human shape, sometimes part animal and human, sometimes as part human and plant.

Two such beings, self-created out of nothing, were the Ungambikula. Wandering the world, they found half-made human beings. They were made of animals and plants, but were shapeless bundles, lying higgledy-piggledy, near where water holes and salt lakes could be created. The people were all doubled over into balls, vague and unfinished, without limbs or features.

With their great stone knives, the Ungambikula carved heads, bodies, legs, and arms out of the bundles. They made the faces, and the hands and feet. At last the human beings were finished. Thus every man and woman was transformed from nature and owes allegiance to the totem of the animal or the plant that made the bundle they were created from -- such as the plum tree, the grass seed, the large and small lizards, the parakeet, or the rat.

This work done, the ancestors went back to sleep. Some of them returned to underground homes, others became rocks and trees. The trails the ancestors walked in the Dreamtime are holy trails. Everywhere the ancestors went, they left sacred traces of their presence -- a rock, a waterhole, a tree.


The Dreaming has different meanings for different Aboriginal groups. The Dreaming can be seen as an embodiment of Creation, which gives meaning to everything. It establishes the rules governing relationships between the people, the land and all things for Aboriginal people.

The world was created during the Dreamtime. A Dreaming is a story owned by different tribes and their members that explains the creation of life, people and animals. A Dreaming story is passed on protectively as it is owned and is a form of "intellectual property". In the modern context, an Aborigine cannot relate, or paint someone else's dreaming or creation story without prior permission of the Dreaming's owner. Someone's dreaming story must be respected, as the individual holds the knowledge to that Dreaming story. Certain behavioural constraints are associated with dreaming ownership; for instance, if a Dreaming is painted without authorisation, such action can meet with accusations of "stealing" someone else's Dreaming.

The late Geoffrey Bardon's three books on Papunya specifically mention conflict related to possession of a dreaming story. He uses as an example the Honey Ant Dreaming painted in contemporary times on the school walls of Papunya. Before the mural could be painted, all tribes in Papunya: the Pintupi, Warlpiri, Arrernte, and Anmatyerre, had to agree that the honey ant was an acceptable mural, since Papunya is the meeting place for all tribes. After the mural was painted, one of the senior elders, Long Tom Onion, reminded Bardon that he, the elder, had suggested the mural be painted. Later, Bardon realised Long Tom Onion owned that Dreaming. He comprehended the importance of Dreaming ownership among indigenous Australians, especially those who retain tribal and traditional connections.

Among the Central Desert tribes of Australia, the passing on of the Dreaming story is for the most part gender-related. For example, the late artist from the Papunya movement, Clifford Possum Tjapaltjarri, painted ceremonial dreamings relating to circumcision and love stories, and lessons for "naughty boys". His daughters Gabriella Possum and Michelle Possum have tended to paint the "Seven Sisters" Dreaming or the Pleiades, as they inherited that Dreaming through the maternal line. Consequently, they have painted their "Grandmother's Country", which is an expression of their inherited ownership of the land through knowledge of the dreamings. Clifford and his daughters have not painted the same subjects; Clifford has never painted the "Seven Sisters Dreaming". By tribal law, his daughters are not allowed to see male tribal ceremonies, let alone paint them.

Dreamings as "property" have also been used by a few Aboriginal tribes to argue before the High Court of Australia their title over traditional tribal land. Paintings of Dreamings, travelling journeys and ceremonies tend to depict the locations where they occur. There have been cases in which 10-metre-long paintings have been presented to the Court, as evidence of the tribe's title deed after terra nullius was struck down during the tenure of Chief Justice Gerard Brennan.