The Aurora, Texas UFO Incident is quite fascinating and speaks of the crash of something and the burial of a mall body the six of a child, in the cemetery of this small town. There we find the story of a local cemetery that once claimed to hold a body from an 1897 UFO crash. This happened six or seven years before the Wright Brothers' first flight when numerous sightings of one or more cigar-shaped mystery airships were reported across the United States. 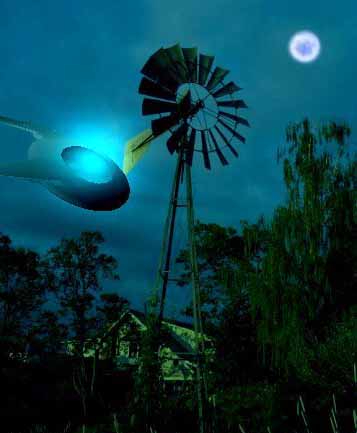 One of these accounts appeared in the April 19, 1897 edition of the Dallas Morning News. Written by Aurora resident S.E. Haydon, the alleged UFO is said to have hit a windmill on the property of a Judge J.S. Proctor two days earlier at around 6am, resulting in its crash. The pilot (who was reported to be "not of this world", and a "Martian" according to a purported Army officer from nearby Fort Worth) did not survive the crash, and was buried "with Christian rites" at the nearby Aurora Cemetery. The cemetery contains a Texas Historical Commission marker mentioning the incident.

Purportedly, wreckage from the crash site was dumped into a nearby well located under the damaged windmill, while some ended up with the alien in the grave. Adding to the mystery was the story of Mr. Brawley Oates, who purchased Judge Procter's property around 1945. Oates cleaned out the debris from the well in order to use it as a water source, but later developed an extremely severe case of arthritis, which he claimed to be the result of contaminated water from the wreckage dumped into the well. As a result, Oates sealed up the well with a concrete slab and placed an outbuilding atop the slab. (According to writing on the slab, this was done in 1957.) 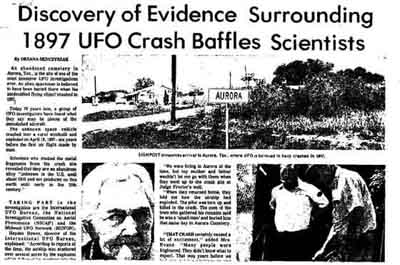 ALIENS AND UFOS IN THE OLD WEST