The Astrological Symbol for Aquarius - The Water Bearer

Its symbol represents water, a universal image which dates back thousands of years. 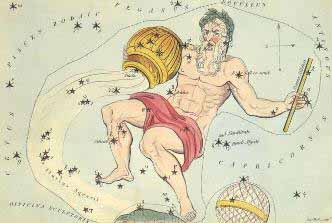 Aquarius is often depicted, even on very early Babylonian stones, as a man or boy, carrying a jar, bucket, or urn, the contents of which he is pouring out, with an appropriate towel in the left hand. The human figure sometimes omitted the stream of water from this jar flows into the mouth of Pisces Austrinus, the Southern Fish. 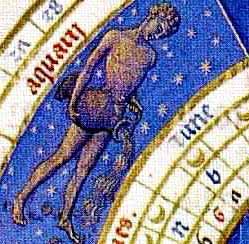 In Greek literature it was the Water-pourer, Manilius Aequoreus Juyeuis, or simply Juvenis. Ganymedes, whose name means 'rejoicing in virility' , a Phrygian boy, said to be the most beautiful of mortals, was the youngest son of the King of Troy and his wife Callirhoe. Other versions make him variously the son of Laomedon Ilus, Assaracuus, or Erichthonius. Ganymedes, when barely adolescent, was guarding his father's sheep in the mountains near Troy, Zeus fell in love with him, changed himself into an eagle (Aquila) and bore Ganymedes off, or kidnapped, or abducted him, to Mount Olympus. Other versions say that the abductor was Minos, Tantalus, or even Eos. Ganymedes was chosen by Zeus to be forever young as bearer of the golden cup of divine nectar, for Jove (Jupiter/Zeus) and for the gods on Mount Olympus, and when the Olympian gods of ancient Greece gathered for a feast, it was Ganymede who served them wine.

Aquarius is involved in the dynamic of creative change within an established order. In Aquarius, a unique vision comes to the world; it either struggles against entrenched forces, or is hailed as something brilliant, new and necessary.

Society's inventors and discoverers are associated with Aquarius, as are its rebels and revolutionaries, and its eccentric outcasts. Change is often called for in society, and yet only in certain forms is the radical energy of Aquarius able to integrate easily and actualize its unusual vision.

Aquarius is ruled by Uranus, the sky god who brought greenness and life to the earth when his lightning-bolts fertilized Gaia's waters.

Similarly, the symbol of the water bearer relates to the dramatic yearly flooding of the Euphrates and the Nile rivers, which brought new life to the farm lands of the ancients.

Today, this sign is sometimes associated with storms, floods, earthquakes, and other cataclysmic events in nature. In human society, such dynamics may manifest as revolutions or inventions which alter the status quo.

Electricity, radio, telephone, and computing are examples of such innovations, which Aquarius intuitively understands and uses without trepidation. While Gemini rules short-distance communication, Aquarius spans the heavens with its strange, invisible technologies, linking diverse communities through the exchange of information and ideas, and creating a new world in the process.

Aquarians are somewhat other-worldly, and may not seem to inhabit their bodies in the same way as others.

Their spirits are vast, their minds mobile, and they are often occupied with thoughts of the near or distant future.

They may work within the societal establishment, yet be occupied with some unusual aspect of it - as inventors, researchers, or helping professionals who are able to connect with society's outcasts.

Aquarians are also found on the fringes of society, rebellious and philosophical.

Aquarius is as creative as its opposite sign, Leo, but aspires to create something in which it joins with humanity: a breakthrough scientific experiment which others may repeat, a community artwork, a new organization which works for social change.

As an air sign, Aquarius is oriented toward humanity as a whole, and can seem impersonal, cool, or absent at times.

Yet Aquarians have a special exuberance, perhaps stemming from their smiling disregard for ho-hum social conventions.

They are not overly inclined to toot their own horns, for they see how their own achievements rest on the shoulders of those who have gone before them.

They can be erratic or opinionated.

Aquarians are those most likely to have the truly unique visions which every so often alter the landscape of human history.

Whether accepted by the established order out of which they proceed or not, Aquarians will remain committed to their unique way of being, and their broadly humanistic ideals. 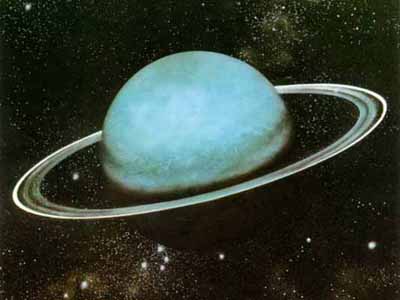 Aquarius is ruled by the planet Uranus, and has Mercury as its exalted planet. Uranus is traditionally associated with explosive destruction and the breaking up of forms. Its function would more correctly be viewed as the power of freeing things from imposed restrictions, loosening the bonds between the components of a centralized object so that they can take on new patterns of interaction.

This need not result in the destruction of the object in question, particularly if the bonds being loosened are social or mental rather than physical. Uranus also governs such things as uniqueness, independence, individuality, and free expression. In the area of natural phenomena it governs quantum phenomena, including electricity and electromagnetic radiation, and vibratory motions in general.

Uranus is part of the modern astrological system, as it was unknown to the Ancients, and thus has no benefit or malefic quality attached to it.

Where Uranus is found, is where you experience changes, upsetting conditions, and sudden reversals. In the areas signified by the house position, you will have to use all your skills to survive many changes or you will be demolished.

Representing sudden change, it can be either positive or negative, depending upon our own circumstances. Interesting to note, that the planet is unusual in that it has an almost 90 degree tilt, so it spins on its side. "Unusual" is a keyword used in describing Aquarians, the sign that Uranus rules.

Natural Ruler of Aquarius and the 11th House, freedom and change are its keywords, and it usually brings new experiences and ideas to which we must adjust. Never static, always changing, and usually very quickly, that is Uranus.

The modern ruler of Aquarius, Uranus rules inventiveness, rebellion, genius, science, astrology, electronics, computers. As the higher octave of Mercury (conscious thought), it is also referred to as the Awakener, and its purpose is to bring new ideas to the conscious mind, to show us something we have never before noticed, all for the purpose of freeing us from our own mental limitations.

As the first of the slow-moving outer planets (spending six to seven years in one sign), Uranus is the first "generational" planet, whose placement by sign is significant for an entire generation rather than for an individual.

Uranus in a birth chart (by sign) represents how you are unconventional, rebellious, different, and progressive thinking. House placement shows where you want personal freedoms, where you buck traditions and demand originality. However, retrogrades or difficult aspects to Uranus, can show destructive behavior - demanding freedom for freedomŐs sake and without structure - that leads to chaos.

Uranus, planet of electricity, innovation, and the progressive spirit of community, rules airplanes, computers, the Internet and alternative music, and individuals with Uranus prominent in their charts may be strongly drawn toward these things.

By transit, Uranus shows where sudden and unexpected changes will occur, where you have to adjust and even change your thinking. It clears away the old and unneeded to make way for the new. The radical changes that Uranus wreaks can be unnerving, especially for those individuals who do not like change (like the Fixed Signs), but it is necessary for growth and will lead to expansion of knowledge and tolerance if we are open to them.

In the area of colors, gemstones, and metals, Aquarius is associated with white, pale yellow, pale green, and electric blue; the gem of amethyst; and the metal of uranium.

As I look ahead for 2001, I see a major upheaval in September.
Aquarius moves quickly and unexpectedly in ways that will change reality forever. 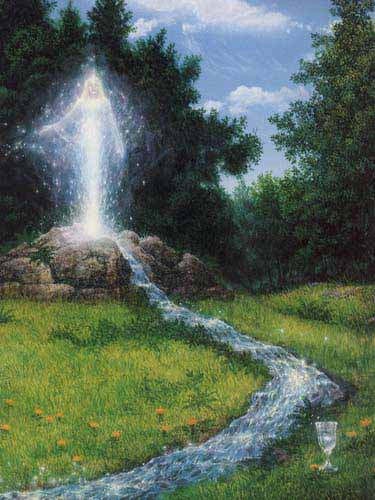 I am Aquarius - February 17