Scrying is a form of divination where one looks at an object and gives it meaning based on subjective interpretation. Cloud scrying is one of the more popular forms of scrying, especially as clouds change shapes as if watching an animated film. Naming Nebulae is another popular form of scrying, but let's get back down to Earth.

Let's go to scrying mounds - best viewed from the air as if messages from ancient aliens for humans to find when they learned to fly. I good reference is the Serpent Mound in North America.

Moving to South America and the land of the Inca, we find the famous Nazca Lines and now what may be another archaeological discovery involving prehistoric animals mounds. 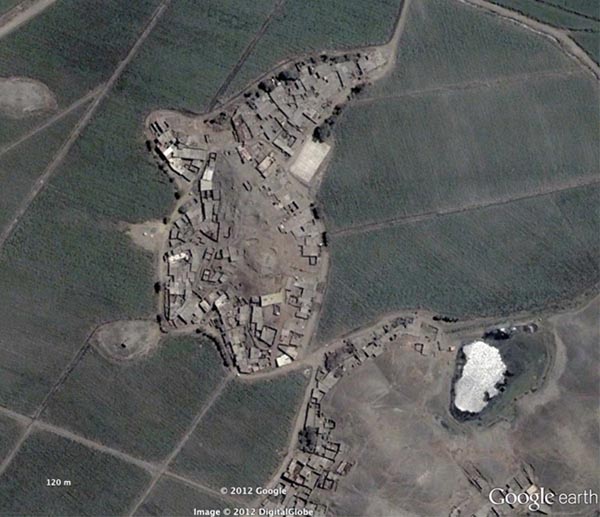 Images of the Mounds


Manmade mounds shaped like orcas, condors and even a duck may be the oldest evidence of animal mounds outside of North America, according to former University of Missouri anthropologist. Writing in the magazine Antiquity, Robert Benfer, a professor emeritus, describes a series of mounds, some more than 1,300 feet (400 meters) across, in coastal valleys in Peru.

Archaeological evidence at the sites pegs some at more than 4,000 years old. "It's going to shake everybody's views," Benfer told LiveScience. "The previous oldest animal figures were at Nazca and they're 2,000 years old." The Nazca Lines are simple stone outlines of animals decorating the Nazca Desert in Peru. Like the newly discovered mounds, they may have had ritual significance. In addition, the shapes likely coincided with the constellations these ancient people saw in the Milky Way.

Benfer discovered the mounds while looking at satellite photos of a site about which he'd long held suspicions. The feature seemed shaped like a condor, he said, but archaeological wisdom suggested that animal effigy mounds were a North-America-only phenomenon, with few exceptions, such as one at a Central America site in Mexico.

The satellite photos revealed furrows that looked like teeth as well as a burned charcoal area perfectly positioned in the spot where the eye of the bird would be. Global positional system (GPS) information and an archaeological investigation of the site convinced Benfer that he was, in fact, looking at a condor-shaped mound, with the eye likely being a site where offerings were burned. The condor is oriented according to astronomical rules: It lines up with the most extreme orientation of the Milky Way as seen from the Chillon Valley where the mound is found.

Next to the condor is a second mound, this one oriented toward the spot where the sun rises on the day of the June solstice, the start of summer. This 1,062-foot-long (324 m) mound appears to be a combination puma and alligatorlike cayman, Benfer reported. Stone pillars, plastic structures and ancient ceramics are associated with all of the sites.

In another Peruvian coastal area, the Casma Valley, Benfer discovered two additional birdlike figures, both "looking" toward the June solstice sunrise. Most likely, he said, these mounds were built under the direction of astronomer-priests. The ancient civilization that constructed the mounds would have depended on astronomical clues to know when to plant and harvest crops, and fish, Benfer said. This astronomical knowledge would eventually turn up in the Inca civilization in the 1400s and 1500s, which recognized the same constellations. "This was the beginning of a very long tradition," Benfer said.

The oldest of the sites dates back to 2200 B.C. Benfer plans to return to the mounds to extract organic material for more precise radiocarbon dating, which is based on the time it takes that carbon to decay. The four large mounds are only the tip of the iceberg, he added - he has explored only five of the 54 valleys along the Peruvian coast and has found numerous smaller mounds, including ones shaped like orcas and even a duck. Many unexplored valleys likely hold more mounds, Benfer said. "It's a totally unexpected find," he said. "It's especially unexpected to archaeologists like me who had walked over some of these sites before without realizing what we walked over."