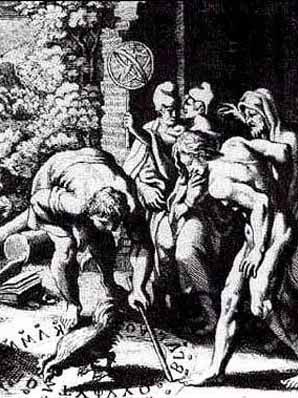 In another version, the observer tethers the bird in the center of a circle, around the perimeter of which is marked the alphabet, with a piece of grain at each letter. For each grain the bird pecks, the observer writes down the letter which that grain represents. The observer also replaces each grain as the bird eats it, so that letters may be repeated. The sequence of letters recorded will presumably contain a message. This form of divination is related to Ouija, by the random selection of letters; and gyromancy by the random selection of letters from a circle around the diviner and to orniscopy, divination by the movements of birds.


Another form of divination using birds is Ornithomancy