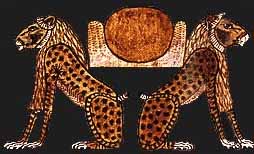 In Egyptian mythology, Aker (also spelt Akar) was one of the earliest gods worshipped, and was the deification of the horizon. There are strong indications that Aker was worshipped before other known Egyptian gods of the earth, such as Geb. In particular, the Pyramid texts make a sinister statement that the Akeru (plural of Aker) will not seize the pharaoh, as if this were something that might have happened, and was something of which to be afraid. Aker itself translates as (one who) bends, and thus Akeru translates as benders, though in what sense this is meant is not fully understood.

As the horizon, Aker was also seen as symbolic of the borders between each day, and so was originally depicted as a narrow strip of land (i.e. a horizon), with heads on either side, facing away from one another, a symbol of borders. Since the sun reaches its peak (its solstice) in the zodiac of Leo, these heads were usually those of lions. Over time, the heads became full figures of lions (still facing away from each other), one representing the concept of yesterday (Sef in Egyptian), and the other the concept of tomorrow (Duau in Egyptian).

Consequently, Aker often became referred to as Ruti, the Egyptian word meaning two lions. Between them would often appear the hieroglyph for horizon, which was the sun's disc placed between two mountains. Sometimes the lions were depicted as being covered with leopard-like spots, leading some to think it a depiction of the extinct Barbary lion, which, unlike African species, had a spotted coat.

Since the horizon was where night became day, Aker was said to guard the entrance and exit to the underworld, opening them for the sun to pass through during the night. As the guard, it was said that the dead had to request Aker to open the underworld's gates, so that they might enter. Also, as all who had died had to pass Aker, it was said that Aker annulled the causes of death, such as extracting the poison from any snakes that had bitten the deceased, or from any scorpions that had stung them.

As the Egyptians believed that the gates of the morning and evening were guarded by Aker, they sometimes placed twin statues of lions at the doors of their palaces and tombs. This was to guard the households and tombs from evil spirits and other malevolent beings. This practice was adopted by the Greeks and Romans, and is still unknowingly followed by some today. Unlike most of the other Egyptian deities, the worship of Aker remained popular well into the Greco-Roman era. Aker had no temples of his own like the main gods in the Egyptian religion, since he was more connected to the primeval concepts of the very old earth powers.