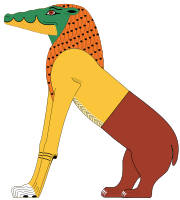 In Egyptian mythology, Ammit (also spelled Ammut, Ammet, Amam, Amemet and Ahemait) was the personification of divine retribution for all the wrongs one had committed in life. She dwelt in the Hall of Ma'at, who was the personification of the concept of truth, balance, and order. In the Ancient Egyptian underworld (known as Duat) hearts of the dead were weighed by Anubis against a feather from Ma'at's headdress. The hearts of those who were heavy with wrongdoing failed the test were given to Ammit for her to devour. Those whose souls were devoured were not permitted to enter Aaru, having to be restless forever - effectively dying a second time. If the heart was lighter than a feather then the soul was judged by the god of the underworld, Osiris. 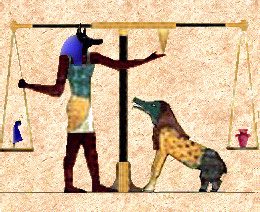 In myth Ammit was not worshipped, and she was never regarded as a goddess. Instead, she embodied all that the Egyptians feared, threatening to bind them to eternal restlessness if they did not follow the principle of Ma'at. Thus Ammit was depicted with the head of a crocodile or dog, the front part of her body as a lioness or leopard, and her hind quarters in the form of a hippopotamus, a combination of those animals which were considered as the most dangerous to the Ancient Egyptians. Although often referred to as a demon, by destroying evil she acted as a force for good.

Her role is reflected in her name, which means Devourer or, more accurately, and less euphemistically, Bone Eater, and her titles such as Devourer of the dead, Devourer of millions (Am-heh in Egyptian), Eater of hearts, and Greatness of Death. In some traditions, Ammit was said to stand by a lake of fire, into which the unworthy hearts were cast, rather than eating them. In this role, Ammit was more the lake guardian than a destroyer, which some scholars believe may be evidence of syncretism of a fiery lake belief, from an as yet unidentified elsewhere. In still another version, Ammut ate the condemned person, rather than only the heart. An evil person then dissolved forever in her stomach.

Although Ammit is seen as a swallowing entity, its order is neutral and strictly serves at the whim of the other deities to take souls that have sinned against the gods and consign them into oblivion. In one rendering Ammit a pole is depicted with seven balls on it.

Ammit, the swallower, bites the pole just between the third and the fourth ball. It has been suggested, most notably by mythologist Joseph Campbell, that the seven balls in that painting represent a prototype of the chakra system. In that case the symbolic meaning would seem to be that if one's aims in life have not surpassed the ones associated with the three lowest chakras and into the realm of those associated with the four highest chakras, one will be devoured by the swallower after death.

Some experts have linked Ammit with the goddess Taweret, who has a similar physical appearance and, as a companion of Bes, also protected others from evil. Other authors have noted that Ammit's lioness characteristics, and the lake of fire, may be pointers to a connection with the goddess Sekhmet.