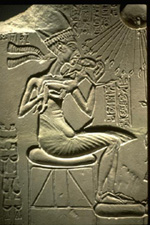 The chief deity in Egyptian mythology, Ra, when considered as a sun god, was thought to traverse the daily sky in a boat, and cross the underworld at night in another, named Meseket. As the mythology developed, so did the idea that Meseket was controlled by a separate ferryman, who became known as Aken.

In their mythology, the underworld was composed of the general area, named Duat, and a more pleasant area to which the morally righteous were permitted, named Aaru. At this point in history, Anubis had become merely the god of embalming, and Osiris, though lord of the whole underworld, dwelt specifically in Aaru, and so Aken was identified as the ruler of the area outside it, Duat in general, on Osiris' behalf.

Because the Egyptian word for part of the soul Ba was also used as a word meaning ram, Aken was usually depicted as being ram-headed. As both an underworld deity, and subservient to Osiris, Aken became known as Cherti (also spelt Kherty), meaning (one who is) subservient. The main center of his cult became Letopolis, and it is considered a possibility that his cult caused the development of the myth of the ferryman in other Mediterranean mythologies, such as that of Charon.