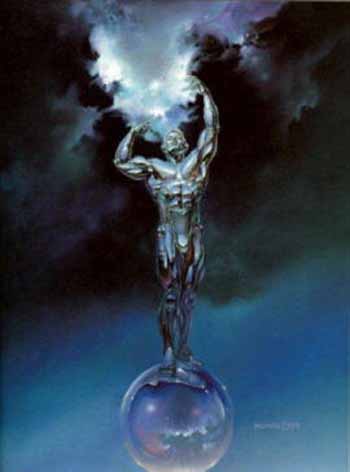 Uranus the primal Greek god personifying the sky. His equivalent in Roman mythology was Caelus. In Ancient Greek literature, Uranus or Father Sky was the son and husband of Gaia, Mother Earth. According to Hesiod's Theogony, Uranus was conceived by Gaia alone, but other sources cite Aether as his father. Uranus and Gaia were the parents of the first generation of Titans, and the ancestors of most of the Greek gods, but no cult addressed directly to Uranus survived into Classical times, and Uranus does not appear among the usual themes of Greek painted pottery. Elemental Earth, Sky and Styx might be joined, however, in a solemn invocation in Homeric epic.

Most Greeks considered Uranus to be primordial, and gave him no parentage, believing him to have been born from Chaos, the primal form of the universe. However, in Theogony, Hesiod claims Uranus to be the offspring of Gaia, the earth goddess. Alcman and Callimachus elaborate that Uranus was fathered by Aether, the god of heavenly light and the upper air. Under the influence of the philosophers, Cicero, in De Natura Deorum ("Concerning the Nature of the Gods"), claims that he was the offspring of the ancient gods Aether and Hemera, Air and Day. According to the Orphic Hymns, Uranus was the son of Nyx, the personification of night.

n the Olympian creation myth, as Hesiod tells it in the Theogony, Uranus came every night to cover the earth and mate with Gaia, but he hated the children she bore him. Hesiod named their first six sons and six daughters the Titans, the three one-hundred-armed giants the Hekatonkheires, and the one-eyed giants the Cyclopes.

Uranus imprisoned Gaia's youngest children in Tartarus, deep within Earth, where they caused pain to Gaia. She shaped a great flint-bladed sickle and asked her sons to castrate Uranus. Only Cronus, youngest and most ambitious of the Titans, was willing: he ambushed his father and castrated him, casting the severed testicles into the sea.

For this fearful deed, Uranus called his sons Titanes Theoi, or "Straining Gods." From the blood that spilled from Uranus onto the Earth came forth the Gigantes, the Erinyes (the avenging Furies), the Meliae (the ash-tree nymphs), and, according to some, the Telchines.

From the genitals in the sea came forth Aphrodite. The learned Alexandrian poet Callimachus reported that the bloodied sickle had been buried in the earth at Zancle in Sicily, but the Romanized Greek traveller Pausanias was informed that the sickle had been thrown into the sea from the cape near Bolina, not far from Argyra on the coast of Achaea, whereas the historian Timaeus located the sickle at Corcyra; Corcyrans claimed to be descendants of the wholly legendary Phaeacia visited by Odysseus, and by circa 500 BCE one Greek mythographer, Acusilaus, was claiming that the Phaeacians had sprung from the very blood of Uranus' castration.

After Uranus was deposed, Cronus re-imprisoned the Hekatonkheires and Cyclopes in Tartarus. Uranus and Gaia then prophesied that Cronus in turn was destined to be overthrown by his own son, and so the Titan attempted to avoid this fate by devouring his young. Zeus, through deception by his mother Rhea, avoided this fate.

These ancient myths of distant origins were not expressed in cults among the Hellenes. The function of Uranus was as the vanquished god of an elder time, before real time began.

After his castration, the Sky came no more to cover the Earth at night, but held to its place, and "the original begetting came to an end" (KerŽnyi). Uranus was scarcely regarded as anthropomorphic, aside from the genitalia in the castration myth. He was simply the sky, which was conceived by the ancients as an overarching dome or roof of bronze, held in place (or turned on an axis) by the Titan Atlas.

In formulaic expressions in the Homeric poems ouranos is sometimes an alternative to Olympus as the collective home of the gods; an obvious occurrence would be the moment in Iliad 1.495, when Thetis rises from the sea to plead with Zeus: "and early in the morning she rose up to greet Ouranos-and-Olympus and she found the son of Kronos ..."

William Sale remarks that "... 'Olympus' is almost always used of the home of the Olympian gods, but Ouranos often refers to the natural sky above us without any suggestion that the gods, collectively live there". Sale concluded that the earlier seat of the gods was the actual Mount Olympus, from which the epic tradition by the time of Homer had transported them to the sky, Ouranos. By the sixth century, when a "heavenly Aphrodite" (Urania) was to be distinguished from the "common Aphrodite of the people", Ouranos signifies purely the celestial sphere itself.