The Great America Solar Eclipse From Manhattan and Brooklyn

Below are pics taken in Manhattan by my daughter Nikki - and in Bay Ridge, Brooklyn taken by me and neighbors. What Nikki and I found was a feeling of sharing freely ... eclipse glasses, viewing boxes, and energies, with everyone. Nikki said this was the best Manhattan energy she has experienced in a long time. I felt the same about Brooklyn. People across the nation experienced the same camaraderie and fun. With everything going on in the Trump administration, this energy was greatly needed to bond people together and share their stories about the experience. (Video: Trump looks directly at the Sun) Everything that is happening now - for better or worse - is uniting consciousness. Perhaps this was not only a physical eclipse but an eclipse of consciousness and an indicator of that which unites us at the end, comes from above.

Subliminal message about aliens on the moon? 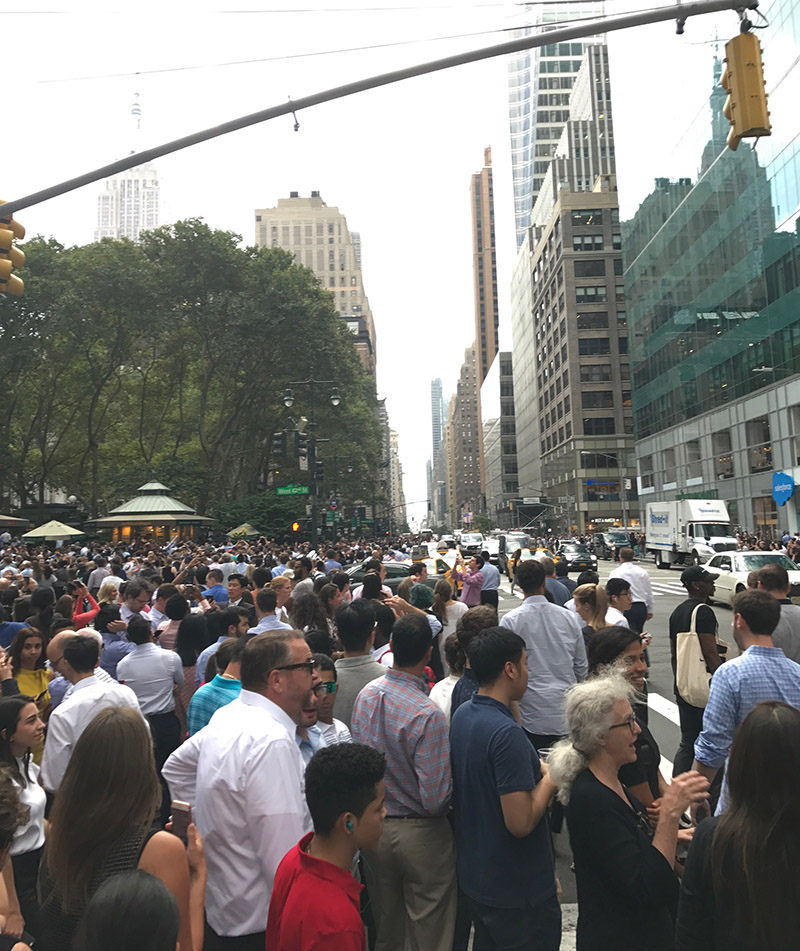 Nikki with her friend Brendan 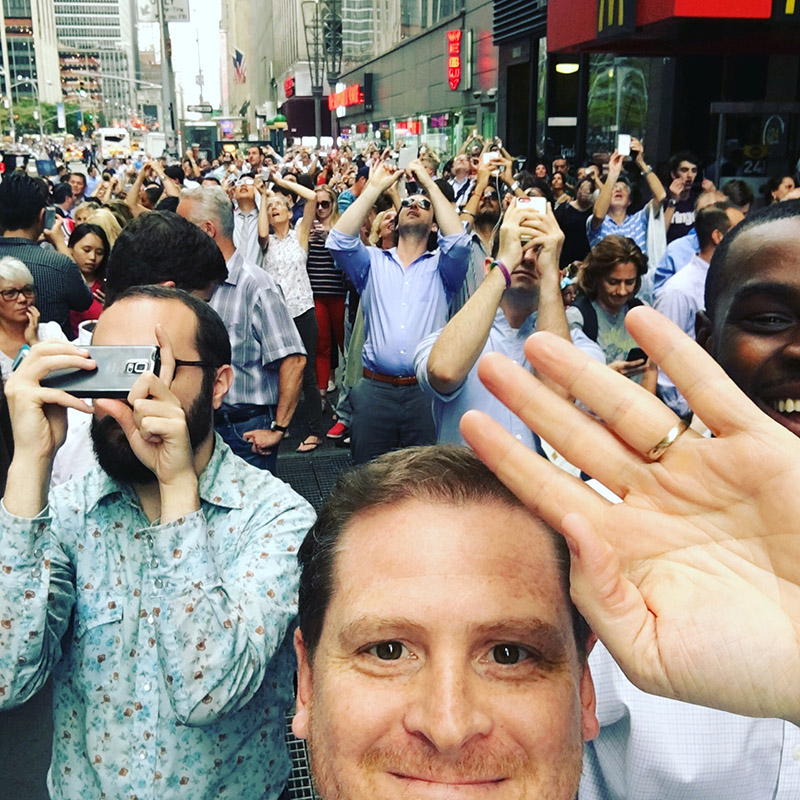 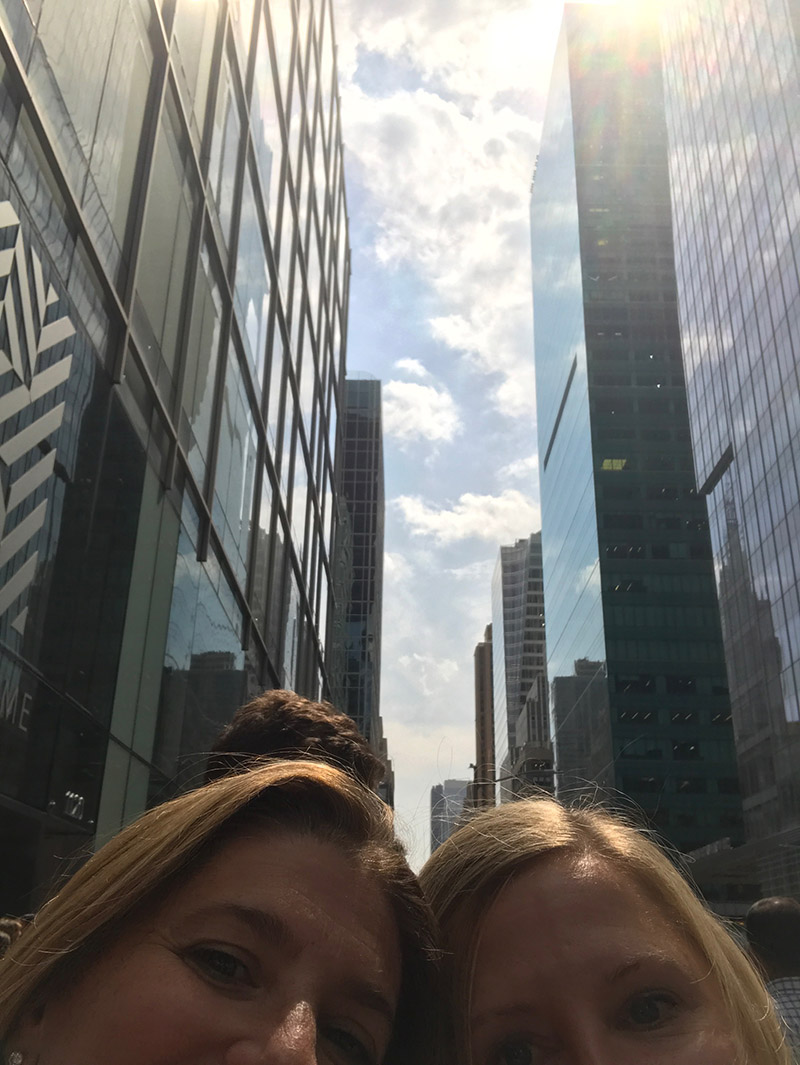 You cover the camera lens with the sunglasses then take the pic. 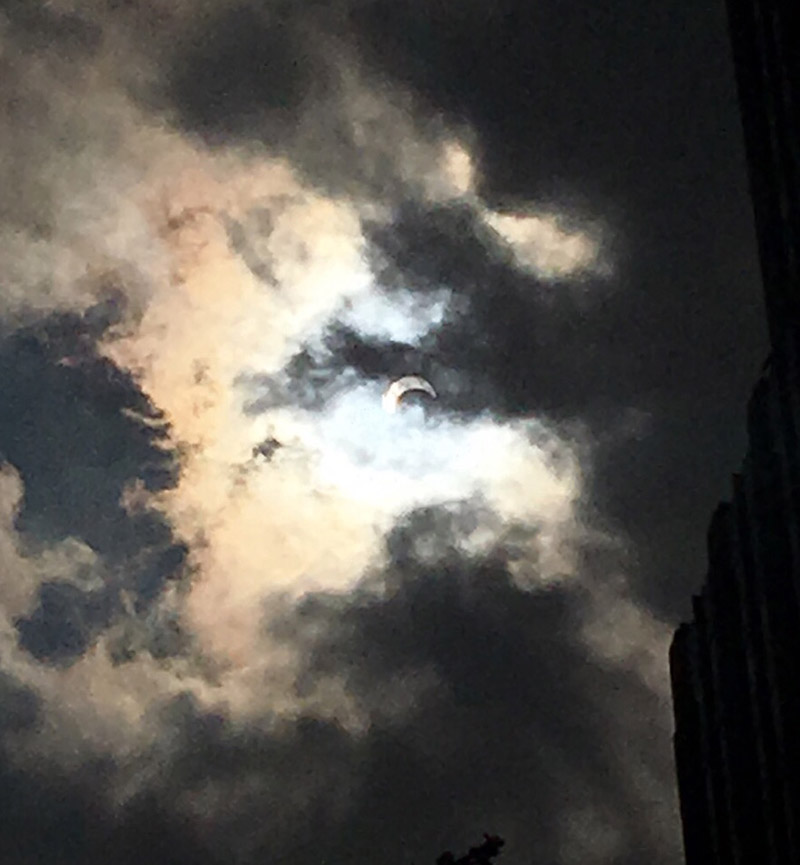 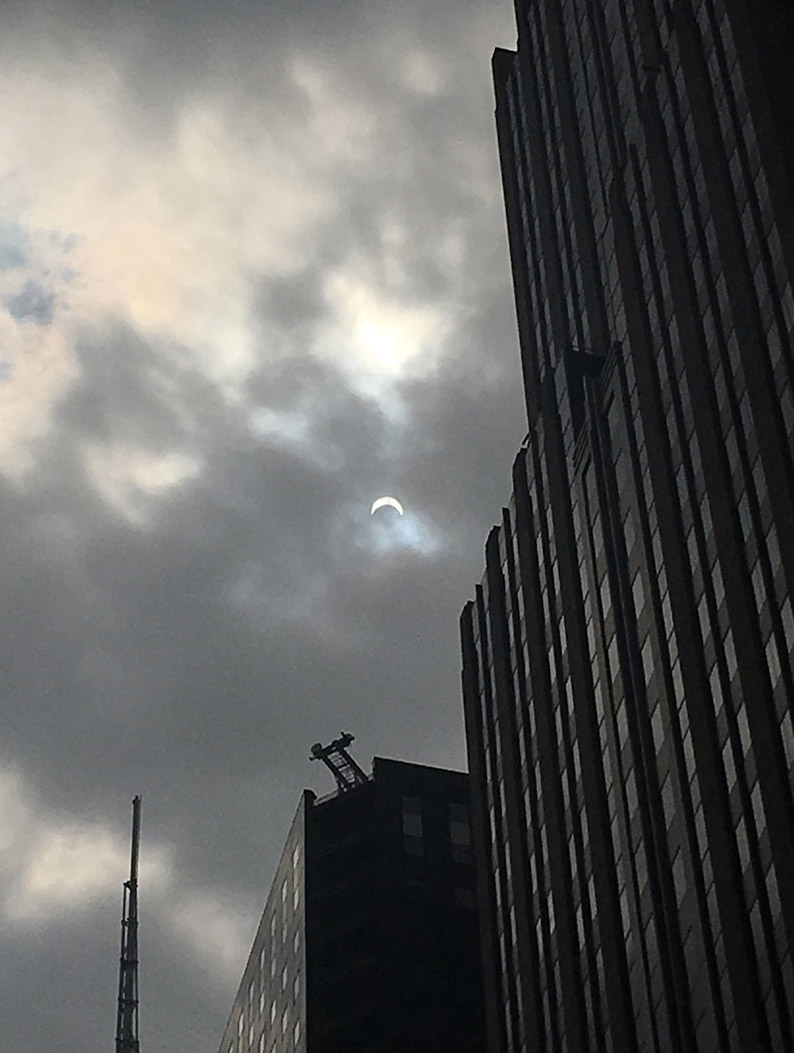 
I went downstairs to experience the energies of the eclipse about ten minutes before the eclipse gave us 71% visibility in New York. Though I could have watched it from my terrace, but there was something about sharing the experience with neighbors that felt right.

The sun was over the Brooklyn arch of the Verrazano Bridge from our perspective when the eclipse began. It gradually moved west over the water as it completed its journey. It was an interesting experience, but my neighbors and I expected it to get darker. I just seemed a bit overcast. 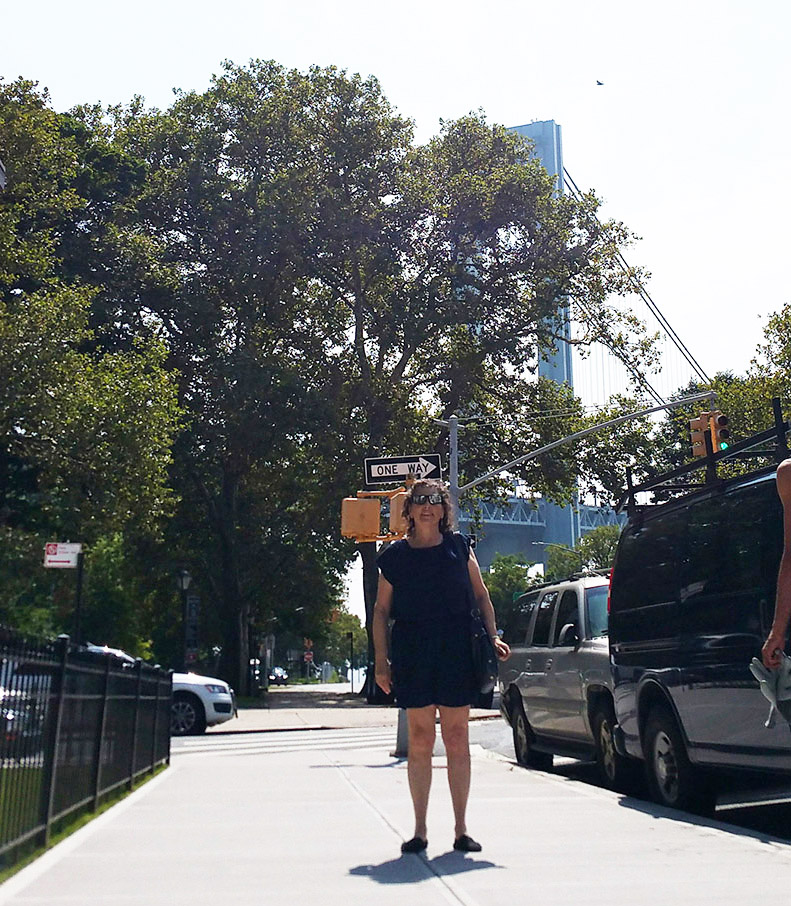 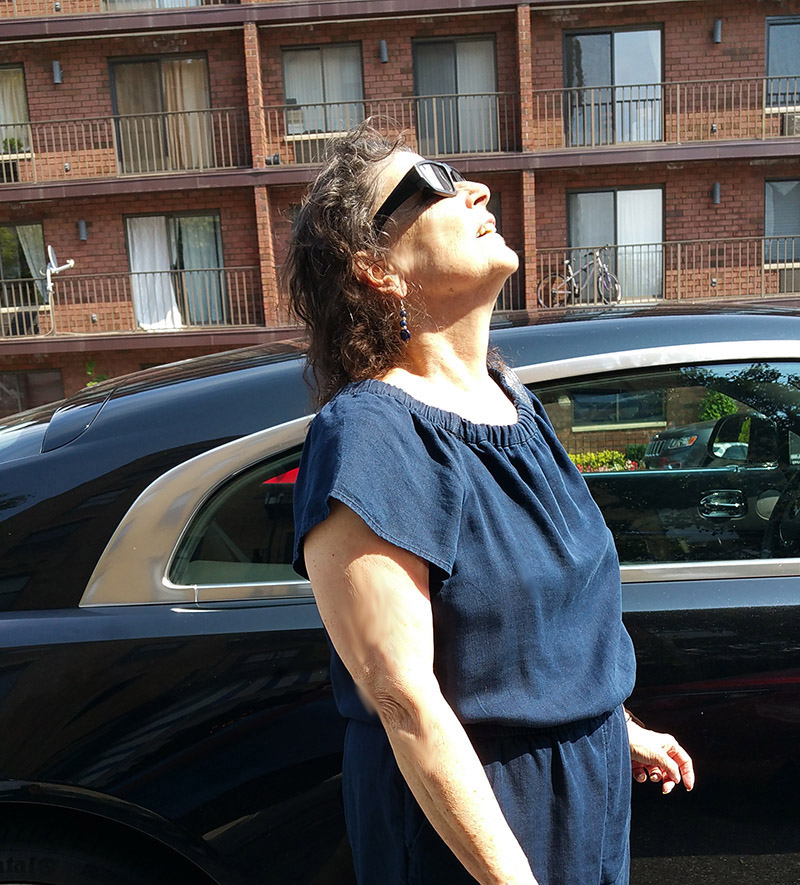 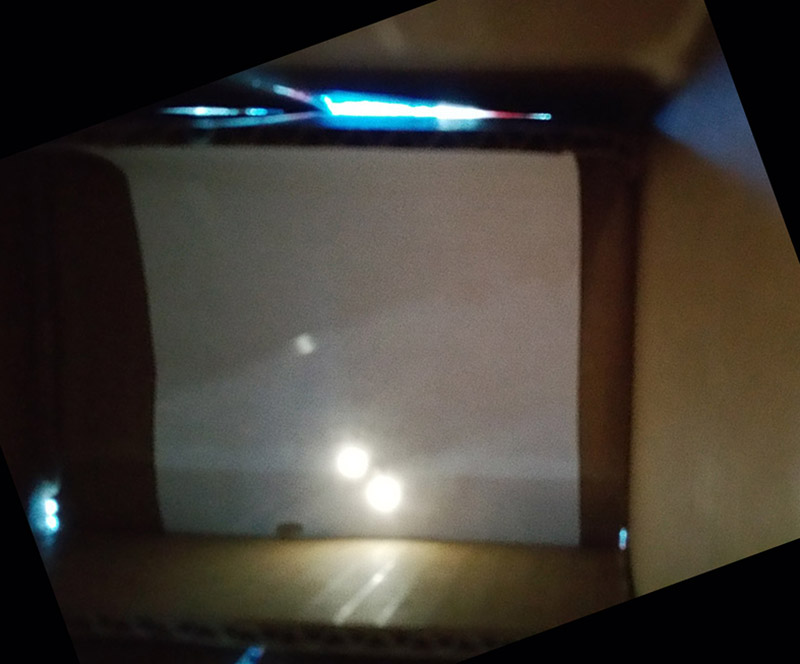 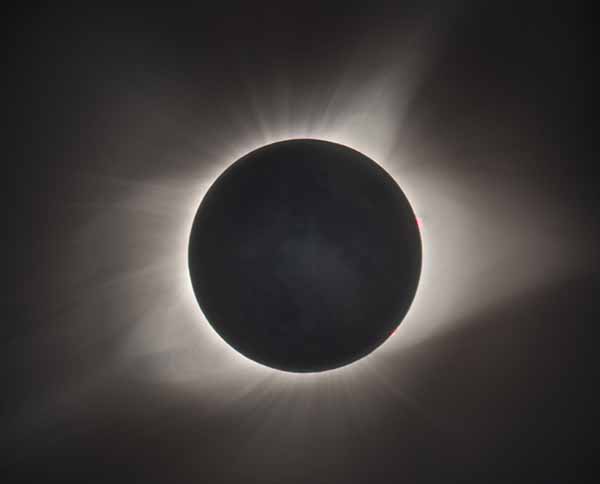 The Crown of the Sun

Explanation: During a total solar eclipse, the Sun's extensive outer atmosphere, or corona, is an inspirational sight. Streamers and shimmering features visible to the eye span a brightness range of over 10,000 to 1, making them notoriously difficult to capture in a single photograph. But this composite of telescopic images covers a wide range of exposure times to reveal the crown of the Sun in all its glory. The aligned and stacked digital frames were taken in clear skies above Stanley, Idaho in the Sawtooth Mountains during the Sun's total eclipse on August 21. A pinkish solar prominence extends just beyond the right edge of the solar disk. Even small details on the dark night side of the New Moon can be made out, illuminated by sunlight reflected from a Full Earth. 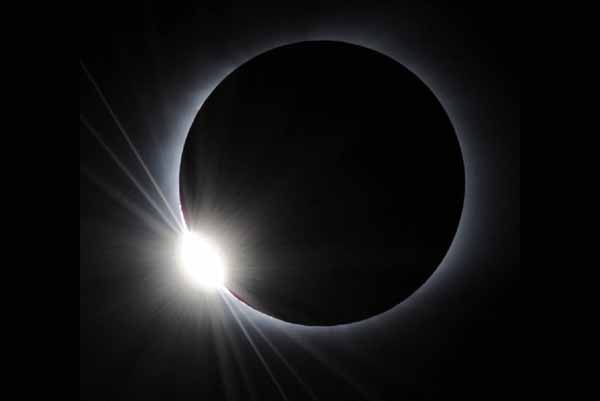 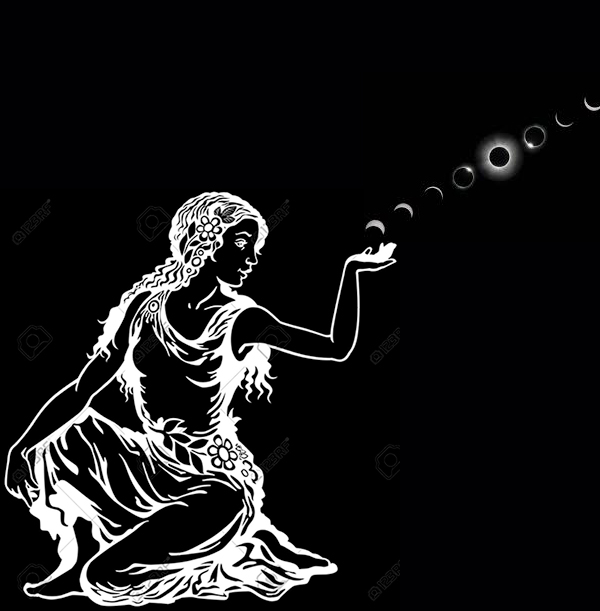 Happy Birthday to the Crystalinks readers born in Virgo.

Virgo is a mutable Earth sign ruled by Mercury. 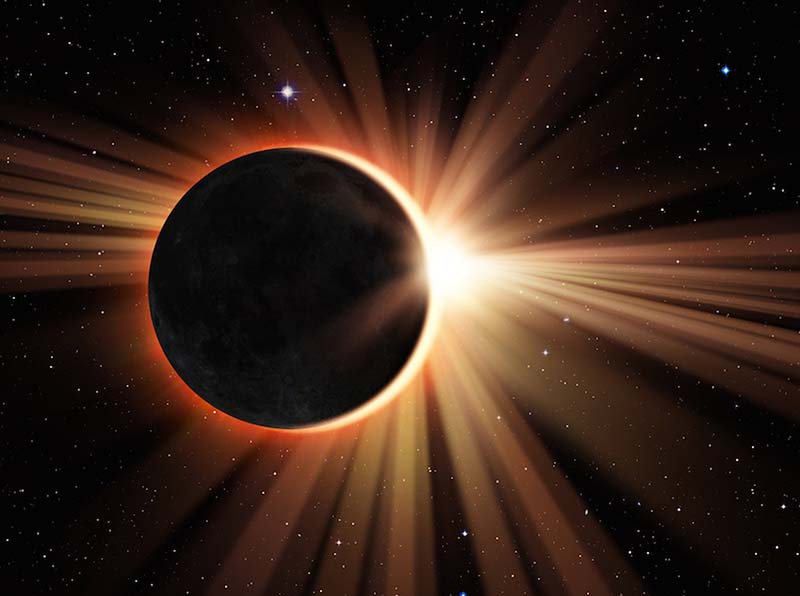 
The Solar Eclipse Had a Spooky Effect on Nature
Live Science - August 22, 2017

From flowers spontaneously shutting their petals to hundreds of thousands of salmon washing ashore, the eclipse yesterday had a downright spooky impact on nature, according scientists observing the effects. It's no surprise that animals are affected by the eclipse; after all, many have strong day-night behavior patterns that are tied to cycles of light and dark, as well as temperature. In the past, researchers have observed bizarre behavior in insects, chimpanzees and baboons in response to eclipses.

But yesterday's eclipse was different, in that it occurred in such a widely populated area; hence, many different experiments were underway to gather citizen-science observations. So far, more than 500 people using the iNaturalist app have made about 2,100 observations involving about 350 different species. Of course, the animals that were most closely observed were the Fidos and Fifis that came along with people on their eclipse-viewing trips. Many of the reports coming into Johnson were of dogs that seemed to be reacting to the eclipse during totality.

While reports came in about cats seeming to be upset as well, it's a little tougher to decipher their behavior. For instance, Sean Carroll, a theoretical physicist at the California Institute of Technology, noted on Twitter that the celestial anomaly was "spooking" one of his cats, while the other remained its "chill" self. "Personality overrides astronomy," Carroll concluded. In general, figuring out why a domestic cat does anything is a little tougher. 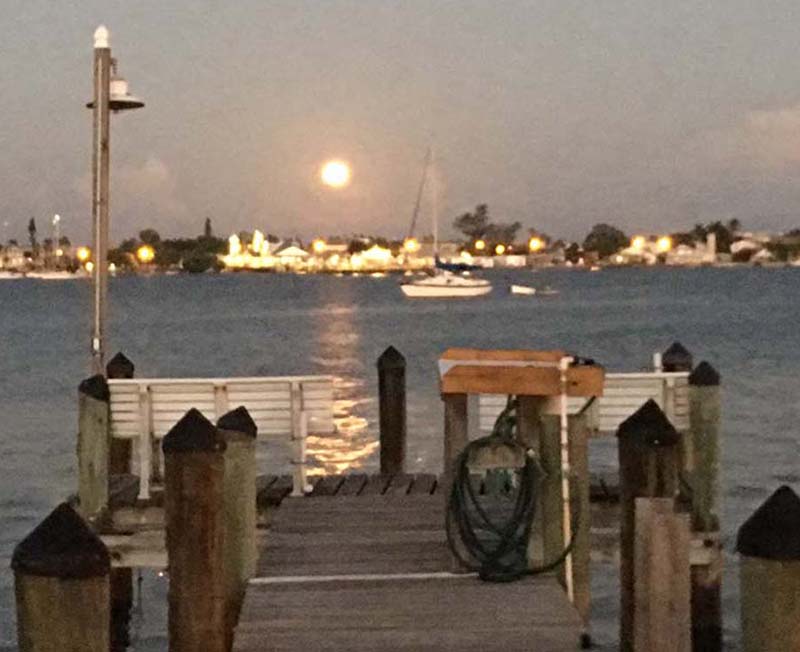 
Everything that is happening now
-> for better or worse <-
is uniting consciousness. 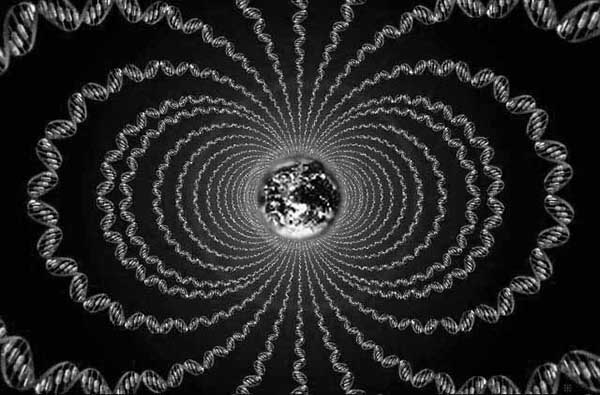