On the Matter of Prophecies - Matteo Tafuri

We all play prophecy games. They tweak our intuition as we are becoming more psychic. They may also connect us to another timeline in which we are experiencing.

Every year brings it's share of predictions sometimes adjusted to ancient prophecies. Even I referenced Eskimo Woman Prophecies after the many powerful earthquakes in the Pacific Ring of fire in November - December 2016.

Dates mean nothing as time is an illusion. I prefer to go with current events, dreams from the grids, and human intuition.

Most interesting to me this week was one of daughters feeling an Ending of something on the horizon though she doesn't know what it is as all is well in her life. 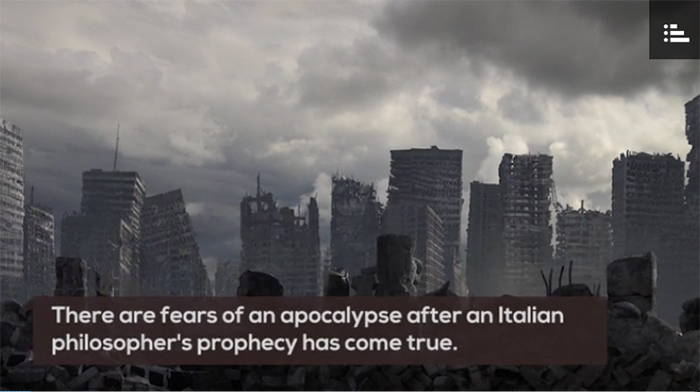 Prophecy by 'Italian Nostradamus' made 500 years ago is at risk of coming true after Italian town is hit by two days of snow   Daily Mail - January 12, 2017
Over 500 years ago an Italian philosopher made the apocalyptic prediction that two consecutive days of snow in the sunny, southern Italian town of Salento would mean 'the end of the world'. Now Matteo Tafuri's prophecy is at risk of coming true after freezing temperatures hit Italy's Peninsula, blanketing Salento's beaches in snow.