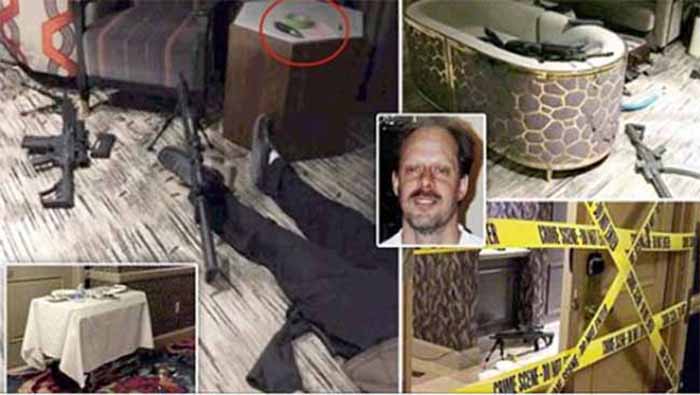 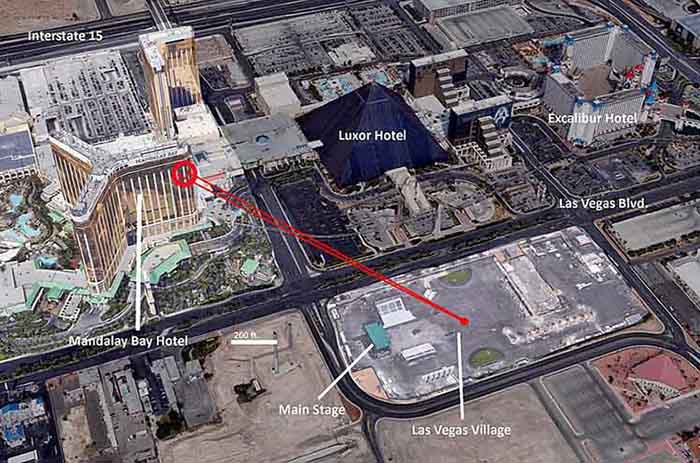 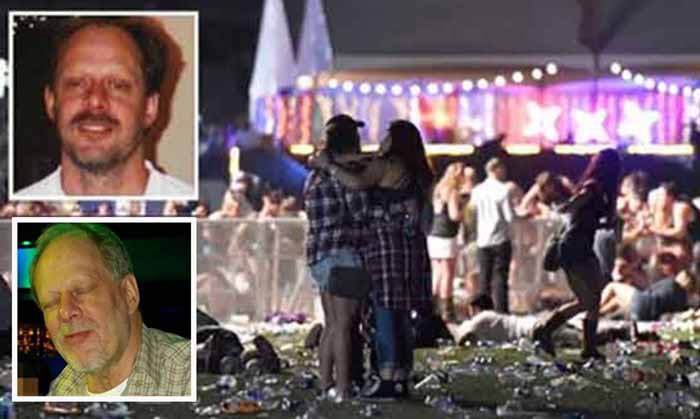 On October 1, 2017, a mass shooting occurred at the Route 91 Harvest country music festival on the Las Vegas Strip in Paradise, Nevada. A gunman opened fire on the festival crowd from the 32nd floor of the Mandalay Bay hotel and casino across Las Vegas Boulevard during the closing performance by singer Jason Aldean at a packed outdoor concert. The shooter was identified as 64-year-old Stephen Craig Paddock who lived in Mesquite, Nevada. He was found dead in his hotel room with a self-inflicted gunshot wound. The incident became the deadliest mass shooting in modern American history, with at least 60 fatalities (including the perpetrator) and 527 injuries. 2017 Las Vegas Strip Shooting

Reality is built on emotions something that both unites and divides the human bio-genetic experiment. The lives and chapters of those injured ~ and others who died in the Las Vegas Shooting ~ ripples out to the world and others who empathically connect. You will have an emotional reaction - consciously or subconsciously - whether you know someone who was there or not - examining how terrorism could affect you and those you love. Each act of terrorism, at home and abroad, impacts on the psyche of everyone in the hologram. Most move on as they are not directly involved, but that energy spike remains as part of how to react in a similar situation.

It also redirects to the emotion FEAR. These days if people hear any type of explosive noise they panic. Fear, panic, and anxiety, are generally linked with mental illness - minor (controlled) or serious (self-destructive). We say we will rise above fear and for some that works - but not really. It's there often acting as a defense mechanism or a catalyst spiraling someone out of control. Mental health is about Control. Are you in control of your life? Do you have self-destructive patterns and tendencies?

Life is about genetics.

Stephen Paddock obviously was mentally ill and as with many psychotic people was able to show the world a normal side to his personality. You just don't become psychotic - it's genetic. It usually shows itself between ages 19-20 when most sufferers have a schizophrenic break while others learn to function around there psychotic tendencies usually with meds. Genetically speaking ... Stephen's father, Benjamin Paddock, suffered from psychosis with suicidal tendency. He was an escaped criminal considered dangerous and was on the FBI's most wanted list for years. During an 18-month span in 1959 and 1960, Benjamin Paddock hit two branches of the Valley National Bank in Phoenix, making off with $25,000. The authorities caught up to him in Las Vegas. Maybe there's a clue there for authorities to figure out.

As with life ~ in solving the equation about who we are and why we are here ~ questions create more questions that lead to questing for answers until that "Ah ha Moment" when the truth about the illusion is realized. This pattern now takes shape in the form of discovering how and why Stephen Paddock went postal. In duality ~ interviewing his girlfriend will help formulate the patterns of Stephen's time here. His is a very sad story but one of many. It is hard to live with mental illness and even harder to live with someone who has one, or a combination of, personality disorders.

They will slowly surface about the shooter and the incident. Some will say he did not act alone.

Once again the topic will come into focus as it does after every mass shooting. Some will argue that the second amendment should be repealed, but that will never happen. It's all about politics and money. Hopefully stricter legislation will be enacted making it harder for those with mental illness to buy guns, though assassins like Stephen Paddock was able stay under the radar while planning the deadliest mass shooting in modern US history. It's not that hard to conceive that somewhere out there some crazy person is planning something deadly.

So where does one go from here? Where does one look to make sense of the increasing insanity in this world? For those programmed like me it's about end times and the collapse of the systems that create the illusion of this reality. Others have come to understand that patterns of destruction continue on with no formula to remedy them. Many believed that god and government will bring resolution but with the current state of political chaos things grow worse from week to week and often from day to day creating awareness that answers to freedom on all levels will not be found here.

There's a slogan, "What happens in Vegas stays in Vegas" ... but not this time. It all echoes through the grids affecting each of us based on our programming and ability to connect events in end times.


About the Great Pyramid discovery/conspiracy - wouldn't it stand to reason that the Big Void was discovered long ago and is just now coming to light to increase tourism? What do Ancient Alien Theorist and others know? Here's the answer ... Hello Zahi ... Egyptologist and former Minister of Antiquities Zahi Hawass told Al-Masry Al-Youm that Khufu pyramid has two gaps, a large gap over the Grand Gallery, and another gap on the ramp has been known for 25 years. Khufu did not build the Great Pyramid. It was an insert in the hologram also known as Khufu's Folly.

The Luxor Hotel and Casino is shaped like a pyramid which takes us to the story below. 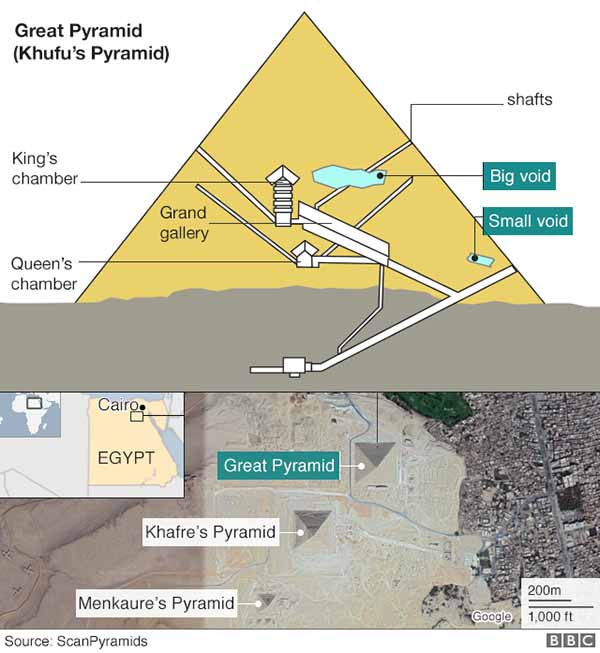 'Big void' identified in Khufu's Great Pyramid at Giza   BBC - November 2, 2017
The mysteries of the pyramids have deepened with the discovery of what appears to be a giant void within the Khufu, or Cheops, monument in Egypt. It is not known why the cavity exists or indeed if it holds anything of value because it is not obviously accessible. Japanese and French scientists made the announcement after two years of study at the famous pyramid complex. They have been using a technique called muography, which can sense density changes inside large rock structures. The Great Pyramid, or Khufu's Pyramid, was constructed during the reign of Pharaoh Khufu between 2509 and 2483 BC. At 140m (460 feet) in height, it is the largest of the Egyptian pyramids located at Giza on the outskirts of Cairo.


Great Pyramid of Giza's hidden chamber is revealed: Scientists uncover a mysterious 'big void' in Egypt's 4,500-year-old monument that could reveal its ancient secrets   Daily Mail - November 2, 2017
A long-hidden narrow void in the Great Pyramid of Giza has been found by scientists in a discovery that could finally reveal the secrets of the 4,500-year-old monument. The void stretches for at least 30 metres (100ft) above the Grand Gallery - an ascending corridor that links the Queen's chamber to the King's in the heart of the pyramid. It is not known why the void exists or if there are any valuable artifacts inside as it is not obviously accessible. But it has similar dimensions to the Gallery, which is 50 metres (164ft) long, eight metres (26ft) high and more than a metre (3.2ft) wide. Researchers suggest it could be a construction gap - part of a trench that allowed workers to access the Grand Gallery and King's Chamber while the rest of the pyramid was built. The discovery was made after physicists took images of the inside of the pyramid using particles fired to Earth from space. These cosmic particles penetrate the rock in a similar way to X-rays, only much deeper. The collaborative effort, between archaeologists, historians and physicists, has been hailed as the biggest discovery inside the Giza landmark since the 19th century. 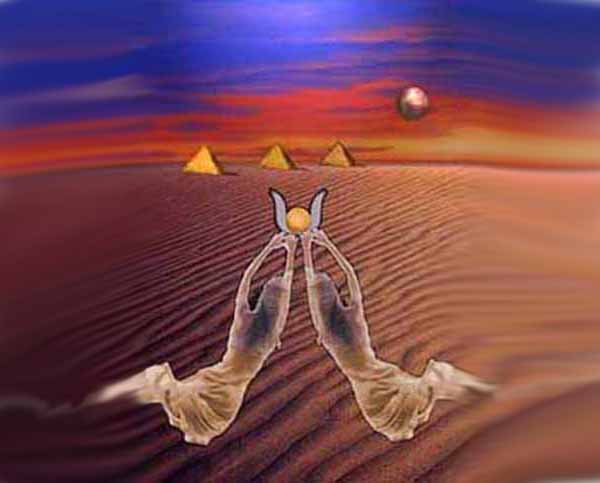 
Taurus and Scorpio are Egypt. 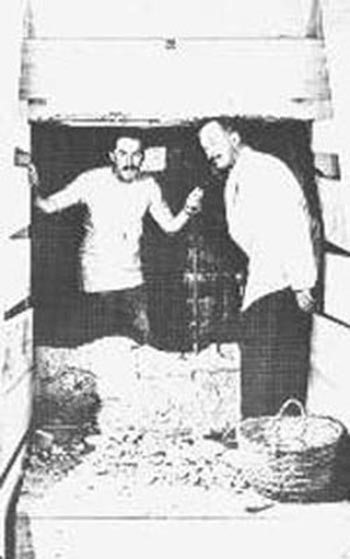 
The All Seeing Eye - The Pyramid - The Flag 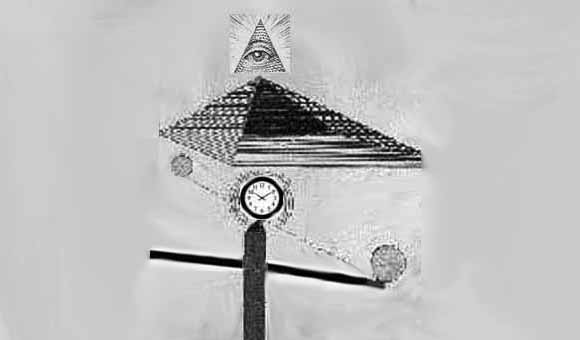