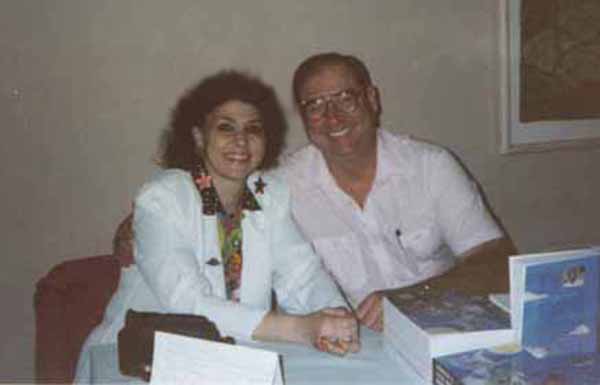 To many people Bill Cooper was a hero fighting against government cover-ups and corruption. To others he was an ex-military man who could never keep his mouth shut. He was a drunk and had no idea what he was talking about. To me, Bill was a friend.

I met Bill in 1989 the year my life completed changed. It was at the UFO Conference in Los Angeles. That conference brought together the most interesting people in metaphysics I have ever met. Bill Cooper wrote, Behold a Pale Horse. He believed in revelation.

In 1994 I sponsored Bill Cooper in Manhattan where he lectured to a large crowd. We had little connection in the years that followed as Bill was always getting into trouble and hiding out, etc. Occasionally I would hear about his exploits from friends or read about him on the Internet.

I am saddened to hear that he has been killed, yet not the least surprising as he was one of the most outspoken players in the government conspiracy game. This is the way he would have envisioned his demise.


On November 6, 2001 William Milton Cooper was killed in a SWAT raid in Eager, Arizona.

I never quite agreed with Bill's time lines for global events nor a lot of what he said, but he was a colorful player.

My heart goes out to his wife and children whom he loved so much and spoke about with such caring. One would ask then why didn't he lead a quieter life if they meant so much? We all have events in our lives that go beyond our personal needs, that which drives us on to play in the game. This was Bill's case. He was also a drinker. He told me he had been in hiding for many years after losing his leg when supposedly the government attempting to kill him by driving his car off a road. This cost him the loss of a leg and his first marriage and more.

Bill said it all began for him while he was in the service and had a UFO sighting but was never allowed to report it. He discovered secret documents about UFO and alien cover-ups and made it his life's quest to expose the truth. To this date the government has not come forward with any admission of conspiracy in these matters. Though there are few people who believe the government.

Bill told me that it was safer to be out in the public voicing his opinion than to hide - because if he was killed or disappeared everyone would know the government was behind it.

The conspiracy games are bigger than the war games and far more deadly linking to terrorism and bio-terrorist attacks. Knowing Bill, he probably had some inside tips about the current war with Afghanistan that he was trying to go public with.

In ancient times conspiracies were linked to the mystery schools, the secret brotherhoods, always run by those who control the game, but remain elusive in the background.

Somehow it seems fitting that Bill's soul should leave at this time of global turmoil the way he died is the way I always saw him leaving in a blaze of glory!

He 'shows' me the color red which represents anger and the physical plane. He also shows me Bill Cooper riding off bravely on his pale horse but he is wearing one of those white sheet things on his head like a sheik and his horse is rearing his head just like the Lone Ranger did in the old TV series. The game will take us back to the Middle East, where it all began as reality comes full circle.

Ride'um cowboy and stay out of trouble up there though I doubt that will happen. He'll probably go after all of the guys who caused him so much grief. Does that mean the government will come forward with information about UFO's? Not until the end of the game. The rules say let the masses know as little as possible and just play in the games they create until we all meet again 'Somewhere Over The Rainbow'! In the end we are all alone, a Lone Rangers metaphor, on a journey with our trusty guides.