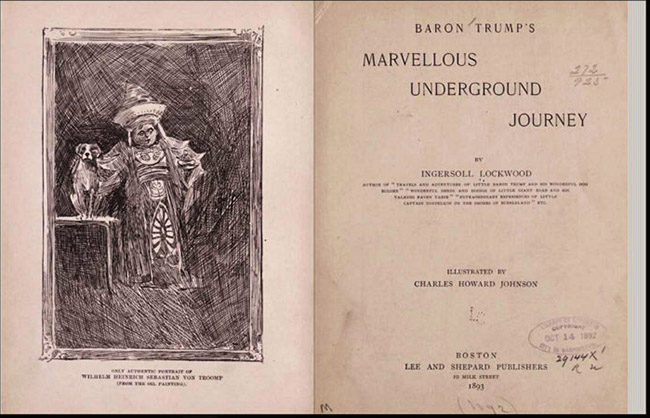 The two book titles posted above, written in the 1890s, have lead some to conclude that Donald Trump is a Time Traveler as they contain seemingly eerie connections to modern-day politics. The narrator of Baron Trump's Marvelous Underground Journey is named Don. There is a character named "Pence" in "The Last President". The word "underground" could also be a reference to physical reality.

We experience in the biggest conspiracy of all - that our reality actually exists and is manipulated by forces as yet not within our realm of understanding. In that sense we are all time travelers experiencing in the grids of consciousness as inserts. Clearly something/someone is keeping Donald Trump in office. Why is he president - to what end? Are we supposed to figure it out? To me it's all a diversion ~ a shiny object ~ in the illusion of this reality.


Spooky! Forgotten 19th century novels feature the 'marvellous' adventures of a boy named Baron Trump who has a mentor named Don and embarks on a trip to Russia   Daily Mail - August 5, 2017
The book titles and the connections to President Donald Trump and his son Barron are just the beginning of several spooky parallels. In the children's books, the novels tell the tale of a wealthy aristocratic boy who lives in 'Castle Trump' and is guided on his journey to Russia by a man named 'Don.' The multitude of similarities to the Trump family living in present day America and the tales in the tomes have internet conspiracy theorists concluding the Trump family is capable of time travel. In the storybook's illustrations of Baron Trump, he is lavishly dressed and decked in jewels, as he leaves Castle Trump and begins his journey to Russia to find an entrance to alternate dimensions.