Mother Shipton was born Ursula Sontheil in 1488 in a cave beside the river Nidd in North Yorkshire, England. Close by was an ancient well with supposeded mystical powers. 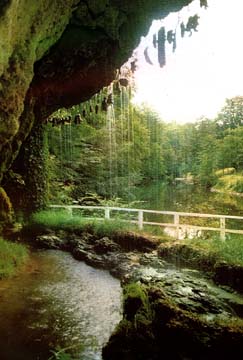 The woman who came to tend to her 15 years old mother, Agatha, spoke of a smell of sulphur and a great crack of thunder as the child came into the world. The baby was born mishapen and huge. Some thought her father was the devil. Her mother gave her up at age two and supposedly went to live in a convent for the rest of her life.

Mother Shipton exhibited prophetic and psychic abilities from an early age. Many feared her and her powers mystical powers, which she always used to help people.

She wrote her prophecies about events to come in the form of poems.

She lived in the time of Henry VIII of England predicted his victory over France in 1513 --"Battle of the Spurs". She prophesized the Dissolution of the Monasteries. This led to the redistribution of the wealth and land held by the monasteries to the emerging middle class and the existing noble families.

At 24 she married Toby Shipton, a carpenter. They had no children. She eventually became known as Mother Shipton a woman helped many people.

Her home town was in Knaresborough England. Her power to see into the future made her well known not only in her home town but throughout England.

Her legend was passed on through oral traditions sometimes embellished a bit. Since 1641 there have been more than 50 different editions of books about her and her propheices.

Many of her visions came true within her own lifetime and in subsequent centuries.

Mother Shipton predicted important historical events many years ahead of their time - the Great Fire of London in 1666, the defeat of the Spanish Armada in 1588 - as well as the advent of modern technology. She even forecast her own death in 1561. Today her prophecies are still proving uncannily accurate.

It is now generally acknowledged that Mother Shipton was largely a myth, and that many of her prophecies were composed by others after her death, and after the events they 'predicted'. Her prophecies were apparently recorded in a series of diaries but the first published book of her work did not appear until 1641 and the most noted work, by Richard Head, came out in 1684. Head later admitted to inventing almost all Shipton's biographical details.