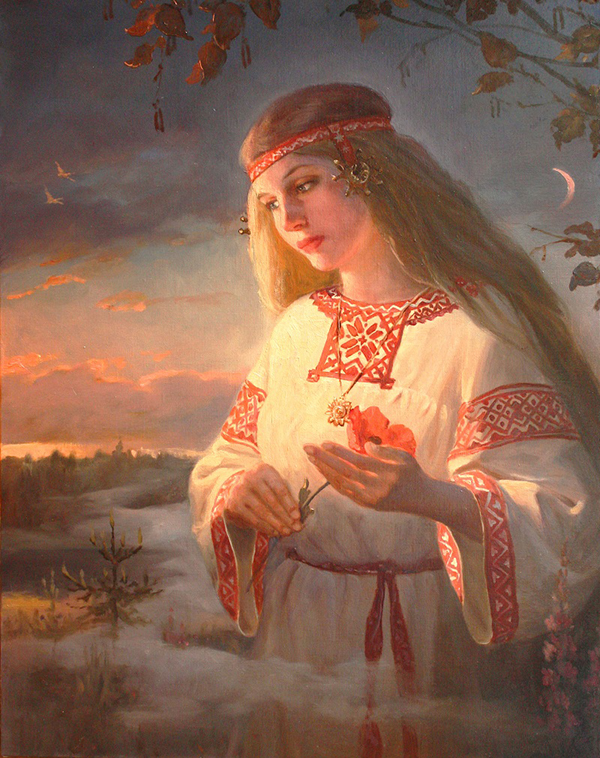 In Slavic mythology, the Zorya (alternately: Zarya, Zvezda, Zwezda) are the three (sometimes two) guardian goddesses, known as the Auroras. They guard and watch over the doomsday hound that threatens to eat the constellation Ursa Minor, the 'little bear.' If the chain breaks loose and the constellation is devoured, the universe is said to end.

The Auroras represent the Morning Star, Evening Star, and Midnight Star, respectively, although the Midnight Star is sometimes omitted. In some myths, the morning Zorya was the wife of the male Myesyats, the moon god, and was a major goddess. In other myths, the Zoryas are virgin goddesses who flank the sun, and Myesyats is an unrelated female moon goddess. The Zorya are associated with marriage, protection, and exorcisms.

The Morning Star is Zorya Utrennaya (also Zvezda Dennista, Zwezda Dnieca). She opens the heavenly gates for the chariot of the sun in the morning. She is depicted as a fully armed and courageous warrior. She is the patron goddess of horses, and is associated with the planet Venus. She is invoked to protect against death in battle, and her prayers were addressed as "Defend me, O maiden, with your veil from the enemy, from the arquebus and arrow..."

The Evening Star is Zorya Vechernyaya (also Zvezda Vechernaya, Zwezda Wieczoniaia, Zwezda Wieczernica). She closes the gates of heaven each night as the sun returns home.

The Midnight Star is Zorya Polunochnaya (also Zwezda Polnoca). Some legends omit this Zorya, leaving only the Morning and Evening Auroras. Each night, the sun dies in the Midnight Zorya's arms and is then restored to life. She is a goddess of death, rebirth, magic, mysticism, and wisdom.

The Zorya are sometimes associated with the Triple Goddess mythic archetype, with the Morning, Evening and Midnight Zoryas representing the maiden, mother, and crone, respectively. Read more ...