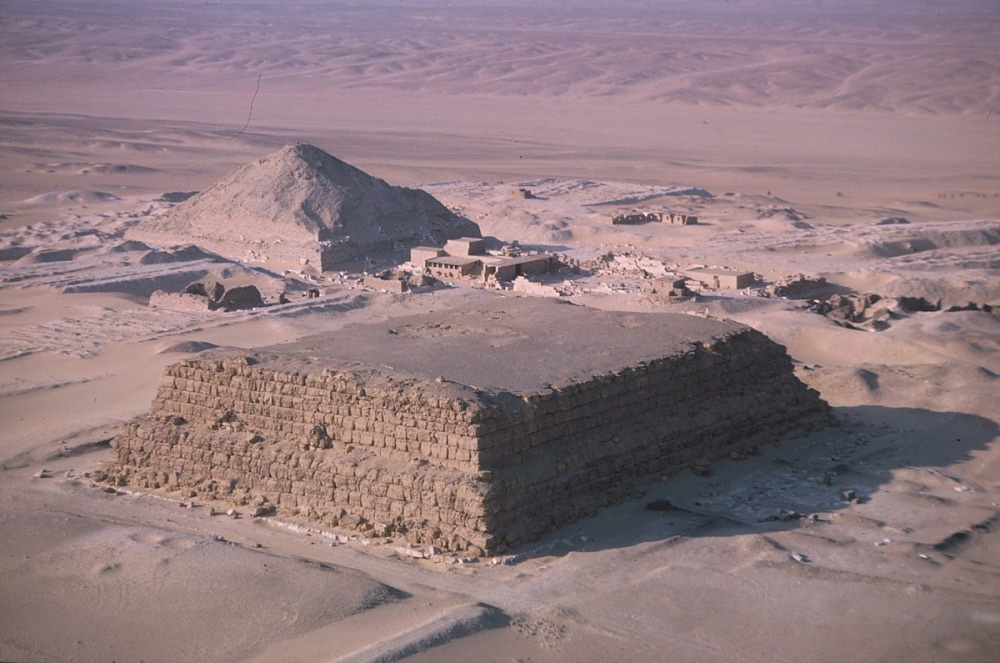 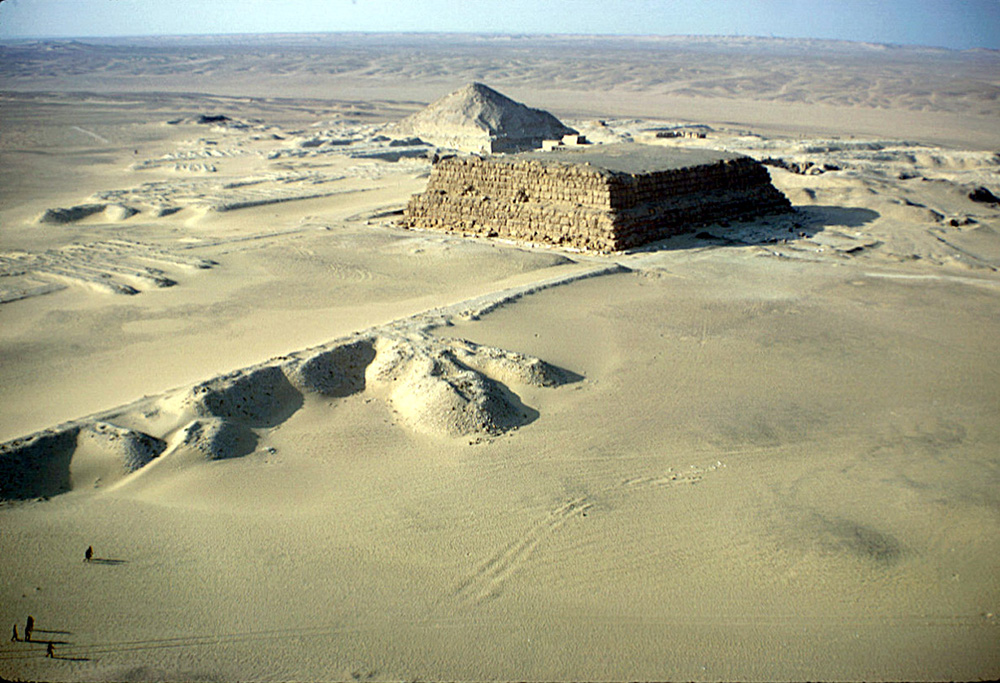 Zawyet El Aryan s a town in the Giza Governorate, located between Giza and Abusir.[1] To the west of the town, just in the desert area, is a necropolis, referred to by the same name. Almost directly east across the Nile is Memphis. In Zawyet El Aryan, there are two pyramid complexes and five mastaba cemeteries.

Near Cairo about halfway between Giza and Abusir is the village of Zawiyet el-Aryan on the banks of the Nile. Just west of the village is a necropolis on a slightly elevated area just on the edge of the desert. This location is about 7 km (4 miles) north of Saqqara. It is a small, relatively unknown pyramid field containing only two unfinished pyramids and nothing at all else. The most advanced, older of these two pyramids is called the Layer Pyramid by Egyptologists and Haram el-Meduwara, or the "Round Pyramid", by locals. The other pyramid is simply referred to as the "Unfinished Pyramid of Zawiyet el-Aryan".

The Layer Pyramid (known locally in Arabic as el haram el midawwar, meaning 'rubble-hill pyramid') is a ruined step pyramid dating to the 3rd Dynasty of Egypt (2686 BC to 2613 BC) and located in the necropolis of Zawyet El Aryan. Its ownership is uncertain and may be attributable to pharaoh Khaba. The pyramid architecture, however, is very similar to that of the Buried Pyramid of king Sekhemkhet and for this reason is firmly datable to the 3rd Dynasty.

The pyramid was excavated at the beginning of the 20th century by two different teams who reported conflicting estimates regarding its size and number of subterranean chambers. No artifacts were found over the course of the excavations, and no trace of a burial could be found. For this reason, it is unclear whether the pyramid was used to bury a pharaoh or was abandoned following the premature death of the king.

At the time of its construction the pyramid was surrounded by a necropolis housing large mastabas belonging to the high officials of the 3rd Dynasty state. A mortuary temple was built on the eastern side of the pyramid and a valley temple was possibly located several hundred metres from it. Nowadays, the pyramid is located within the confines of a restricted military area, barring modern excavations of the site.

The pyramid was first examined by Perring in 1839, who described it but did little else. It was also mentioned in a Lepsius expedition report. It was also examined by Maspero and later still by Morgan, who found the descending entrance passageway in 1896. However, no real investigation took place until around 1900, when Alexandre Barsanti, an Italian artist, restorer and archaeologist, became interested in the structure. He had already carried out excavation on the nearby pyramid of Unas at Saqqara. Later still, George Reisner and C. Fisher also investigated the pyramid, but neither he nor Barsanti completed their projects, and details between the two archaeologists, such as measurements, are contradicting. Furthermore, this area today lies within a military zone and so cannot be further investigated at this time.

Most of this pyramid has never really been investigated at all. A structure to the east of the pyramid on the edge of the desert may have been a valley temple associated with the pyramid. Locals call it el-gamal el-barek, or the "Recumbent Camel". However, if it was the valley temple, it would have been the first complex where this component was oriented east-west. 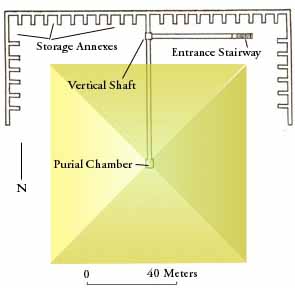 Just east of the pyramid are the remains of brick walls that may have been a mortuary temple, but nothing apparently can be determined from these ruins at this time.

This pyramid was built using the accretion layer method with 14 accretions, and the core was probably between five and seven steps. It is too damaged to really say for sure. Each accretion layer had a dressed outer face, with coarser masonry backing. This was all bonded with a thick, clay mortar. The pyramid actually started out as a step pyramid and if casing was ever applied to the structure, none of it has ever been found. This is why Egyptologists actually believe the pyramid was never finished. Interestingly, considerable mudbrick has been found about the pyramid, which led Reisner to formulate the idea that the pyramid had actually been cased in mudbrick, rather then limestone. Most modern Egyptologists, however, disagree with his theory. They believe that the bricks were used for construction ramps, that were never removed when work was halted on the pyramid.

The entrance to the pyramid substructure is located near the northeast corner of the pyramid in a trench. A steep staircase leads to a westward oriented rough, descending corridor, that in turn terminates at the northwest axis of the pyramid with a vertical shaft. At the base of the shaft, there is a U shaped corridor. On one of its sides, their is no less then 32 storage annexes intended for the burial equipment.

Another corridor leads directly to a burial chamber that is located exactly under the vertical axis of the pyramid. However, this corridor is small, and apparently it would have been difficult if not impossible to move any decent sized sarcophagus through it to the burial chamber. In fact, there was no sarcophagus found in the burial chamber, nor evidence of any burial.

A mastaba near the pyramid, designated Z-500, contained eight alabaster vessels with the name of Khaba, a 3rd Dynasty King. Therefore, the pyramid has been tentatively associated with this king, first, by Reisner and Fisher. However, others, and specifically Nabil Swwelim, believe that it might belong to Neferka, another 3rd Dynasty ruler, though this theory has now largely been contracticted. One way or another, Egyptologists believe that it probably dates to about the second half of the 3rd Dynasty, because of its location between the pyramids of Sekhemkhet's pyramid and that of Snofru's at Meidum. Also, the substructure of this pyramid is so very similar to the pyramid of Sekhemkhet that it must have been built very near in time to his. 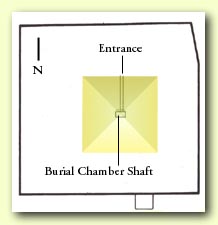 The Unfinished Northern Pyramid of Zawyet El Aryan, also known as Pyramid of Baka and Pyramid of Bikheris is the term archaeologists and Egyptologists use to describe a large shaft part of an unfinished pyramid at Zawyet El Aryan in Egypt. It is dated by mainstream scholars to the early or the mid-4th Dynasty (2613Đ2494 BC) during the Old Kingdom period. The pyramid owner is not known for certain and most Egyptologists, such as Miroslav Verner, think it should be a king known under his hellenized name, Bikheris, perhaps from the Egyptian Baka. On the contrary, Wolfgang Helck and other egyptologists doubt this attribution.

The first descriptions of the monument were made between 1842 and 1846 by the German egyptologist Karl Richard Lepsius. He investigated the main shaft and its surroundings and marked the pyramid in his pioneering list as "Pyramid XIII".

The pyramid shaft was examined more closely in 1904-1905 by the Italian archaeologist Alessandro Barsanti. Gaston Maspero, then director-general of the Supreme Council of Antiquities of Egypt, visited Barsanti's excavations and was struck by the monumental size of the construction.

Not much is know about the Unfinished Pyramid at Zawiyet el-Aryan then about the layered pyramid. It is probably a 4th dynasty pyramid, and it has been speculated that it was built by a king who ruled between the reigns of Khafre and Menkaure, but only for a very brief time. He may have been overlooked by the king lists. Fragmentary inscriptions have been found that might indicate a name such as Nebka, or Wehemka, but they are difficult to read and may refer to a Baka who was also known as Nebkare or Beufre, the Bicheris on Manetho's king list. At any rate, the work on this pyramid probably ended after only one year.

If finished, the pyramid would have been very nearly the size of Khafre's pyramid. Walls near the pyramid, made of fieldstone and clay, or similar to those found round the Giza pyramids. Within, a long, sloping corridor leads to a shaft about 21 meters (69 feet) deep. The bottom of the shaft was paved with huge blocks of granite and limestone. There was a massive granite sarcophagus in the form of an oval tub, with an intact cover, but no body within.