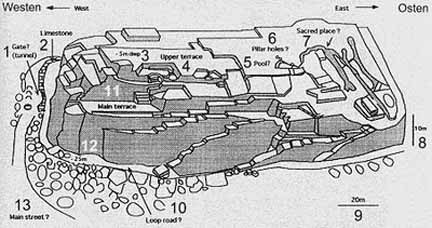 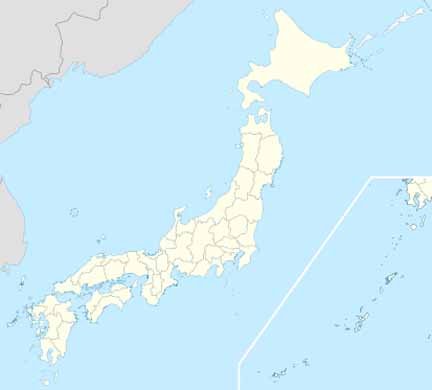 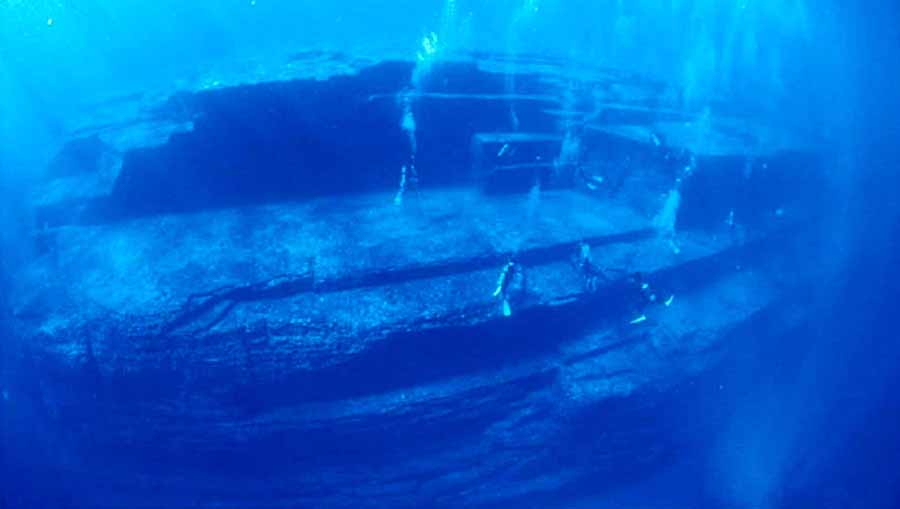 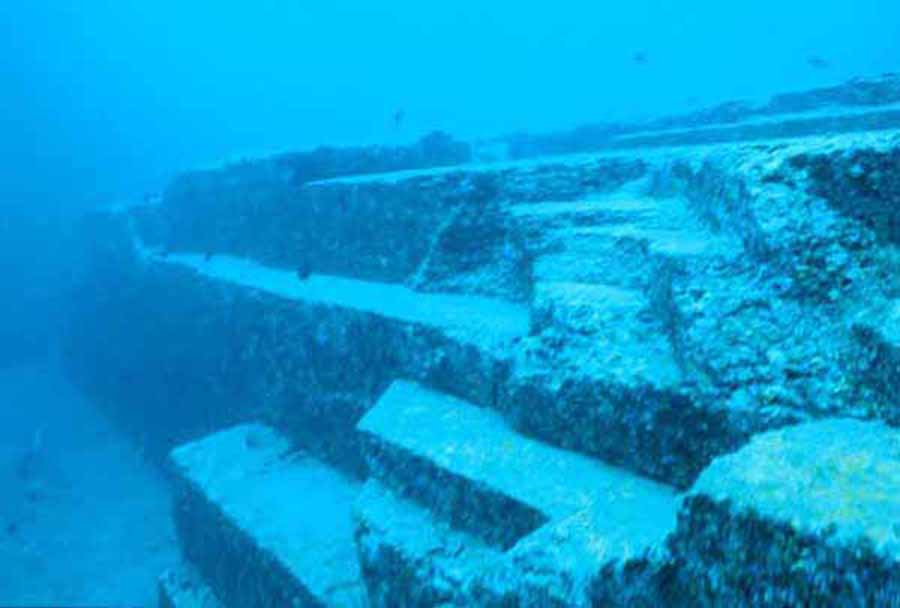 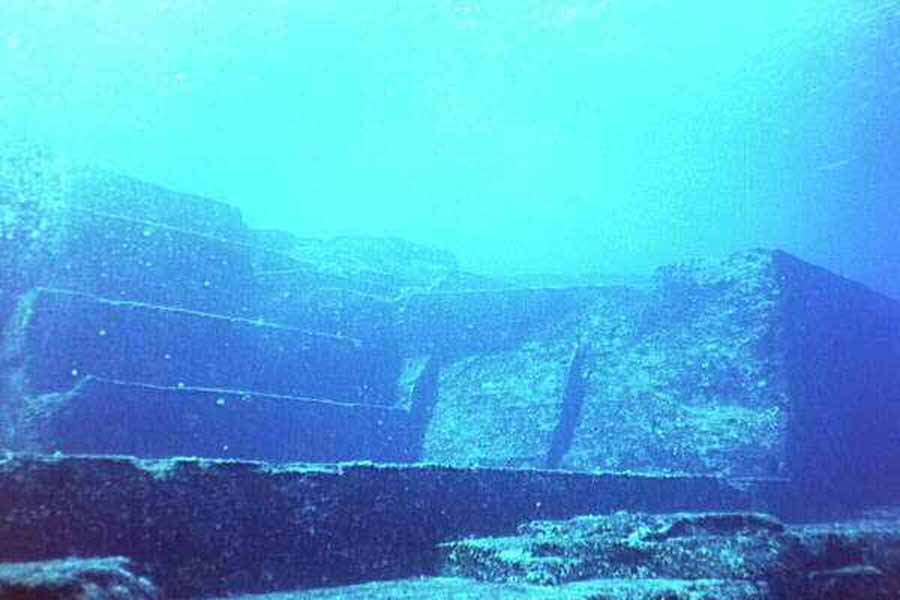 The Yonaguni Monument is a massive underwater rock formation off the coast of Yonaguni, the southernmost of the Ryukyu Islands, in Japan. There is a debate about whether the site is completely natural, is a natural site that has been modified, or is a manmade artifact. It is composed of terraces and steps, and has formations up for personal interpretation. It is perhaps part of an ancient civilization that lived on the planet millennia ago, almost looking like an ancient landing platform.


The Monument consists of medium to very fine sandstones and mudstones of the Lower Miocene Yaeyama Group, deposited about 20 million years ago. Most of the significant formations are connected to the underlying rock mass (as opposed to being assembled out of freestanding rocks).

The main feature (the "Monument" proper) is a rectangular formation measuring about 150 by 40 m (490 by 130 ft), and about 27 m (90 ft) tall; the top is about 5 m (16 ft) below sea level. Most of its top surface consists of a complex series of terraces and broad steps, mostly rectangular, bounded by near vertical walls. 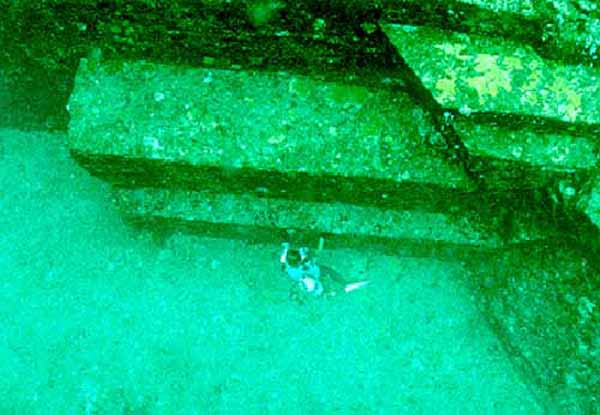 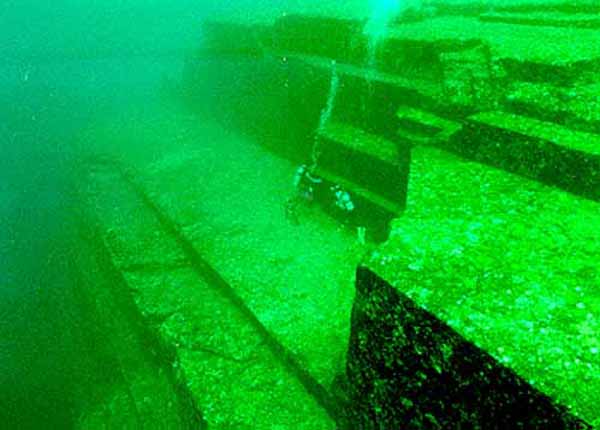 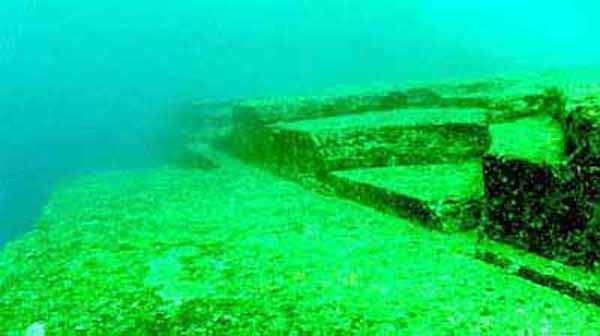 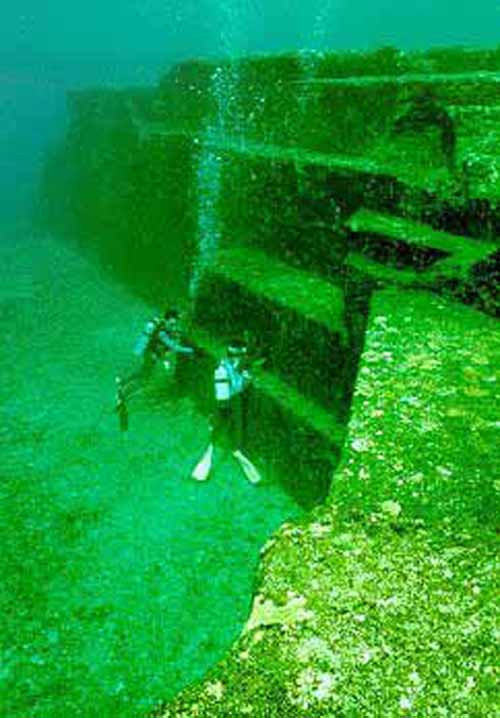 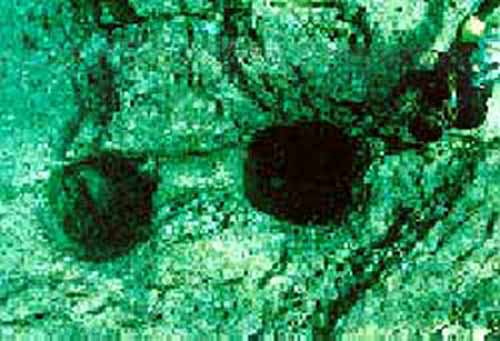 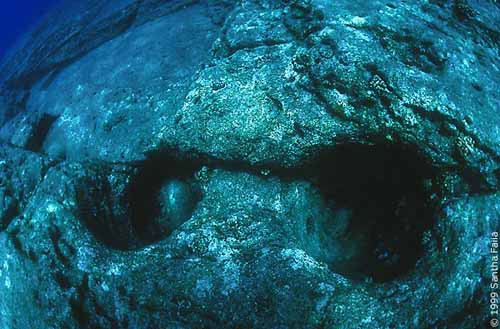 Interpretations of the Structures


The "Loop Road" is a 5 m (16 ft) wide ledge that encircles the base of the formation on three sides;

The "Gosintai" is an isolated boulder resting on a low platform;


The Turtle or Thunderbird is a low star-shaped platform 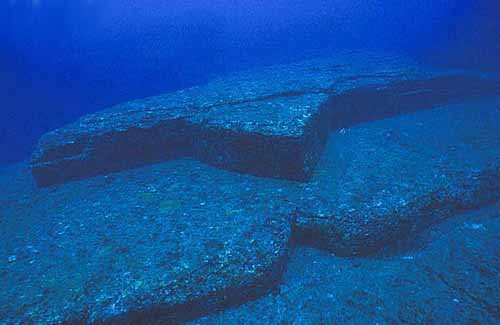 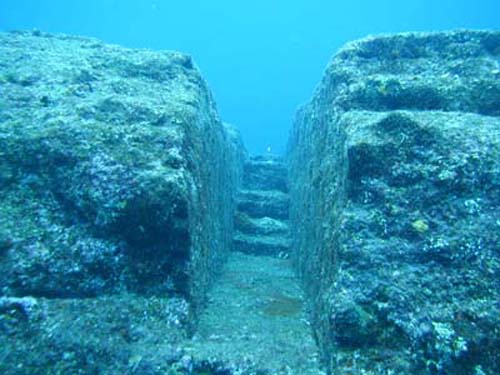 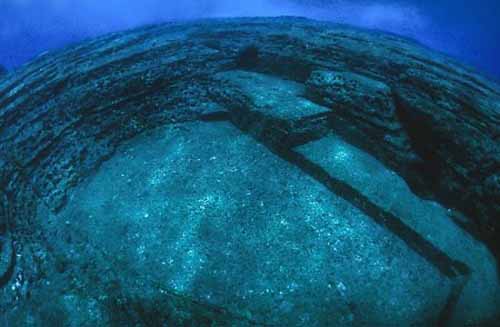 The Stage is an L-shaped rock that Resembles a Dragon 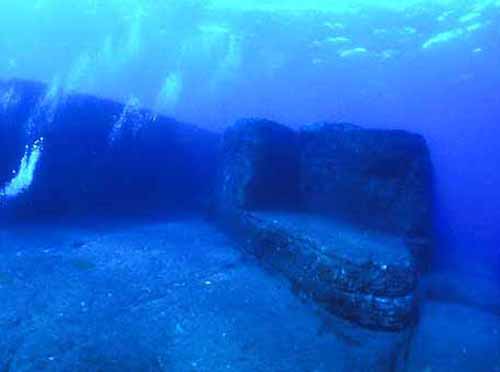 The Stone Face is reminiscent of the Moai of Easter Island 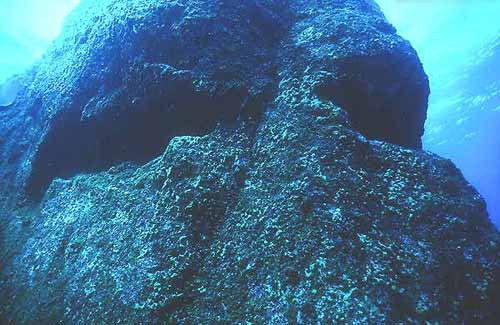 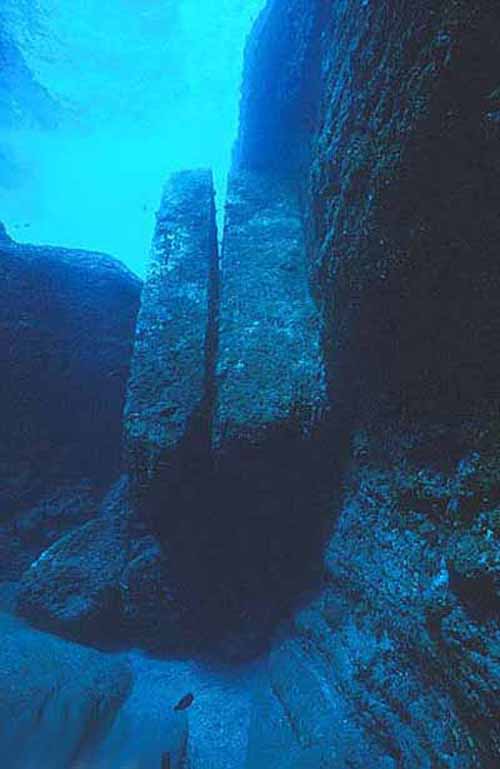 The flat parallel faces, sharp edges, and mostly right angles of the formation have led many people, including many of the underwater photographers and divers that have visited the site and some scholars, to the opinion that those features are man-made.

These people include Gary and Cecilia Hagland and Tom Holden who went on underwater expeditions to study and photograph the site as well as Dr. Sean Kingsley, a marine archaeologist. These features include a trench that has two internal 90° angles as well as the twin megaliths that appear to have been placed there. These megaliths have straight edges and square corners. However sea currents have been known to move large rocks on a regular basis.

Some of those who see the formations as being largely natural claim that they may have been modified by human hands. The semi-regular terraces of the Monument have been compared to other examples of megalithic architecture, such as the rock-hewn terraces seen at Sacsayhuaman. The formations have also been compared to the Okinawa Tomb, a rock-hewn structure of uncertain age.

Other evidence presented by those who favor an artificial origin include the two round holes (about 2 feet wide, according to photographs) on the edge of the Triangle Pool feature, and a straight row of smaller holes which have been interpreted as an abandoned attempt to split off a section of the rock by means of wedges, as in ancient quarries. Kimura believes that he has identified traces of drawings of animals and people engraved on the rocks, including a horse-like sign that he believes resembles a character from the Kaida script. Some have also interpreted a formation on the side of one of the monuments as a crude moai-like "face".

Supporters of artificial origin also argue that, while many of the features seen at Yonaguni are also seen in natural sandstone formations throughout the world, the concentration of so many peculiar formations in such a small area is highly unlikely. They also point to the relative absence of loose blocks on the flat areas of the formation, which would be expected if they were formed solely by natural erosion and fracturing.

If any part of the Monument was deliberately constructed or modified, that must have happened during the last Ice Age, when the sea level was much lower than it is today (e.g. 39 m (130 ft) lower around 10,000 years BCE).

During the Ice Age, the East China Sea was a narrow bay opening to the ocean at today's Tokara Gap. The Sea of Japan was an inland sea and there was no Yellow Sea; people and animals could walk into the Ryukyu peninsula from the continent. Therefore, Yonaguni was the southern end of a land bridge that connected it to Taiwan, Ryuyu, Japan and Asia. This fact is underscored by a rock pillar in a now-submerged cave that has been interpreted as a fused stalactite-stalagmite pair, which could only form above water.

Kimura first estimated that this must be at least 10,000 years old (8,000 BCE) dating it to a time when it would have been above water.

In a report given to the 21st Pacific Science Congress in 2007 he revised this estimate and dated it to 2,000 to 3,000 years ago as the sea level then was close to current levels.

The existence of an ancient stoneworking tradition at Yonaguni and other Ryukyu islands is demonstrated by some old tombs and several stone vessels of uncertain age.

Some of those who have studied the formation, such as geologist Robert Schoch of Boston University, state that it is most likely a natural formation, possibly used and modified by humans in the past. Schoch observes that the sandstones that make up the Yonaguni formation "contain numerous well-defined, parallel bedding planes along which the layers easily separate. The rocks of this group are also criss-crossed by numerous sets of parallel and vertical (relative to the horizontal bedding planes of the rocks) joints and fractures.

Yonaguni lies in an earthquake-prone region; such earthquakes tend to fracture the rocks in a regular manner." He also observes that on the northeast coast of Yonaguni there are regular formations similar to those seen at the Monument. Schoch also believes that the "drawings" identified by Kimura are natural scratches on the rocks. This is also the view of John Anthony West.

Patrick D. Nunn, Professor of Oceanic Geoscience at the University of the South Pacific, has studied these structures extensively and notes that the structures below the water continue in the Sanninudai slate cliffs above, which have "been fashioned solely by natural processes" and concludes in regard to the underwater structures that "there seems no reason to suppose that they are artificial."

Other examples of natural formations with flat faces and sharp straight edges are the basalt columns of the Giant's Causeway and the natural staircase formation on Old Rag Mountain.

In addition to scientific explanations, other esoteric theories are that Yonaguni was part of the legendary ancient civilizations of Mu (Lemuria), whose fate it shared with Atlantis or Thule, as an ancient advanced civilization which sank into the sea. Another theory is that the Yonaguni structures fit in with the claims made by some biblical creationists regarding the presence of advanced civilizations prior to a global catastrophe, resulting in the destruction of many such civilizations.