Female orgasm is in the genes News in Science - February 2005


Women look best once a month Nature - April 2004
A woman's face is most alluring at the height of her cycle.

The tragic women of Pakistan Yahoo

Debate rages over women and Sharia BBC - June 2003
Stoning for adultery and the introduction of vice and virtue squads were hallmarks of Afghanistan's Taleban regime.

Female genital mutilation is still commonplace in Sudan, despite it being illegal, a new study has found.

A survey of university students, published in the medical journal Sexually Transmitted Infections, also revealed that three-quarters of men would prefer their wife not to be circumcised. This casts doubt on the traditional argument that circumcision increases a girl's chances of marriage.

The practice of female genital mutilation carries a maximum five-year jail sentence or fine in Sudan.

The procedure entails the removal of varying amounts of tissue from the genitalia, including all or part of the clitoris.

Although practised worldwide, it is most common in Africa, where it is performed on girls as young as three by people with no medical qualifications, and often without anaesthetic.

If a girl survives the procedure, she then faces many long-term medical problems, including major complications during childbirth.

In a survey of more than 400 students at the University of Khartoum, 57% of female respondents were themselves circumcised.

Most felt their mother had been responsible for the procedure.

More than 80% of men and women were against the procedure, and three-quarters of men said they preferred non-circumcised women, which contradicts the popular argument that uncircumcised women are unlikely to marry.

And at least 40% of students surveyed were also unaware that the procedure is illegal.

The rate of female genital mutilation remains so high despite its illegality because of confusing religious messages and ambiguous law, say the study's authors.

They are calling on religious and educational leaders to help abolish altogether what they call "a cruel tradition". 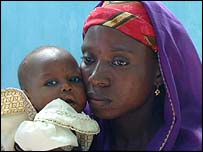 Stoning for adultery and the introduction of vice and virtue squads were hallmarks of Afghanistan's Taleban regime.

Now the debate over Islamic law is raging globally, among Muslim women's groups alarmed by cases in Nigeria and Pakistan.

"I believe in the justice of God. So if justice is not done to me here on earth it will be done in the hereafter," says Amina Lawal.

Ms Lawal, divorced mother-of-three, retains a strong faith in her Islamic religion, even though she has become what many see as a victim of Islamic law.

She was sentenced to death in March 2002 by a Sharia court in northern Nigeria. Her crime was getting pregnant out of wedlock. The man has not been charged. But she is now appealing against being buried up to her neck and stoned to death.

Last week, her second appeal against the sentence was adjourned. It will be heard at a later date. Her case has provoked international outcry and cast the spotlight on what many see as the barbaric and discriminatory penal codes in Islamic law. Or the interpretation of Islamic law.

There are four schools of Islamic law and the one in northern Nigeria - the Maliki one - is particularly strict.

Dawud Noibi, a Nigerian scholar of Islamic law, says: "The provisions of the law are such that rather than being punitive, it is a deterrent, it's meant to be a deterrent."

He adds that the law encourages repentance which will attract forgiveness from God.

But human rights groups say that is not how it is being implemented in northern Nigeria. At the same time they fear that the government of North-West Frontier Province in Pakistan, which is implementing Sharia, will violate the rights of women. Are there real grounds for concern?

According to a human rights report in Pakistan, of 1,800 women in jail, 80% are there for so-called "huddud" offences.

Huddud is the part of Islamic law dealing with punishments for crimes such as "illegal sex" - or sex outside marriage. There is no equivalent number of men in jail for the same offences, which raises the question: who are these women having sex with?

But is Islamic law inherently mysogynistic? No, it is the men who interpret it, say a growing number of Islamic women's networks, which are hitting back at those they say are abusing the law for their own political ends.

The law, which is regarded as sacred, is based on the Koran and the traditions of the Prophet. It does outlaw "zina" or illegal sex, but to prove such sex has taken place is, according to the classical texts, almost impossible.

It requires four witnesses - often interpreted to mean four male witnesses - to the sexual act. So that in practice should mean that few end up in court for such an offence.

The Taleban enforced Islamic law with vice and virtue squads

According to Zainah Anwar of Malaysian advocacy group Sisters in Islam, this law was intended originally to protect a woman's reputation against slander, but it is being distorted.

"What was particularly outrageous in the law was that a woman who reports she has been raped will be charged for slanderous accusation and flogged 80 lashes if she is unable to prove the rape," she says.

"Under the huddud law you have to produce four pious male Muslim eyewitnesses in order to prove illicit sex has taken place and it's impossible."

Perversely, if there were four witnesses to a rape, they would have been accessories to the crime.

Ziba Mir Hosseini, author of Islam and Gender, says: "We do not have in modern times any state which has introduced Sharia and has been able to respect women's rights."

She says nowhere does the punishment of stoning appear in the Koran. She adds that pre-modern interpretations of the Sharia, which often have a heavy overlay of cultural prejudices, are not in keeping with the spirit of Islam, which is about justice and equality.

So what is the answer? For some it is to get rid of patriarchal structures and allow women to act as jurists.

But in the meantime, Amina Lawal in Nigeria has to hope that the non-Islamic appeal court will overturn her conviction. In her culture, the shame will be more difficult to remove.