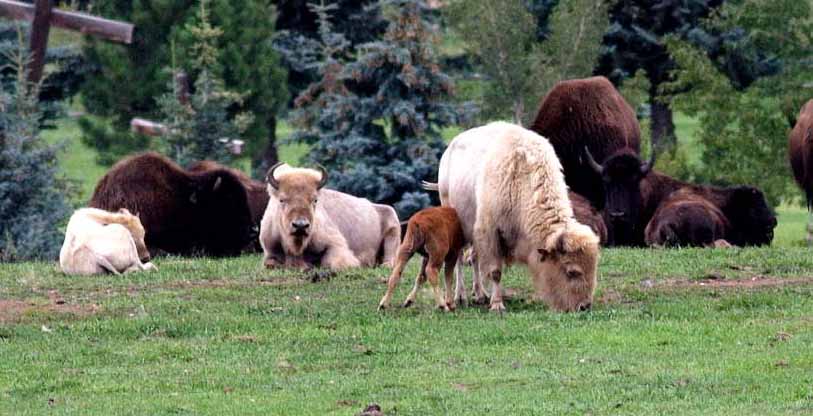 Date Taken: August 20, 2006
Location: Outside of Evergreen, Colorado
Camera Used: Canon EOS
Name: Gene Essman
Comments: I grant permission for you to include this picture of three white bison on your website only. I retain all other publishing rights.

As I was opening Gene Essman's email, my client, Dee, arrived early, sitting on the couch next to me as we explored this wonderful image, 'three' white buffalo, none albino. This email was followed by another from a woman inquiring about my image of Buffalo Calf Woman, which is found in the files, Animal Prophecies and White Buffalo Calf Woman, (another feminine goddess archetype, all the same soul).

Dee has been connecting with White Buffalo Calf Woman and the energy of the buffalo for some time, in meditations and dreams. Synchronicities abound for her, including the events of the day. Of all the hundreds of emails I receive, I would be reading Gene's as Dee sat there, saying nothing, her expression conveying a connection to be discovered during her reading. Dee lives in Long Island, is 2 months older than me, has studied Reiki, works with a female shaman in Long Island, among other things we all study on the road to understanding the nature of reality as a illusion that is about to evolve. She's got it!

Every year, more and more people are waking up and figuring out the truth. If you still think we are moving to paradise or a reborn physical Earth, you are wrong and you're still stuck in old paradigms of thought.

The name Dee goes to alchemist John Dee which I quickly realized but said nothing about as our reading continued... I always know when a client is bringing an alchemical experience to the 'table'. The fun is watching it manifest. Here we go ...

My client, Dee, connects with Padre Pio (Stigmata), bringing this picture to see if I can understand what message he is trying to convey to her.

Padre Pio became famous not only for his piety, but for stories of supernatural events which became attached to him. He acquired fame as a miracle worker, and, like John Vianney, was purported to have the gift of reading souls. He is alleged by believers to have been able to biolocate. On 20 September 1918, while kneeling before a cross, Padre Pio had his first occurrence of stigmata, bodily marks, pain, and bleeding in locations corresponding to the crucifixion wounds of Jesus Christ. This phenomenon followed for fifty years until the end of his life. The blood flowing from the stigmata is said to have smelled of perfume or flowers, a phenomenon mentioned in stories of the lives of several saints and known as the odor of sanctity.

Each time I touched his photo, it created a major pain on the left side of my temple. I rarely have headaches and when I do, I always experience them on the right side. Once again I was becoming one with spirit and receiving messages with physical manifestation, or linked to stigmata.

Then Padre Pio told me ... blood means bloodlines ... bloodlines of creation and creators. Dee has spend years searching for her biological bloodline in this lifetime, the family who raised her refusing to admit she was adopted. DNA tests proved otherwise. I told her what I saw about her birth mother, now deceased. When Dee first sat down for her reading, I asked her who Donna was? She wasn't sure. At this point in the reading she told me that she is a clairvoyant dreamer and had received the name Donna as her biological mother's real name, in a dream.

Padre Pio turned to me as I felt a powerful presence. "Do you remember when you were contacted by a national radio station and talked about Stigmata after the film of the same name premiered?" I remembered. "You are connected," he said, knowing I got his message and agenda for me.

"What is this pressure in my left temple about?" I quickly asked.

His response reflected the flow of blood and bloodlines and creation of the original bloodline. The pain I experienced in my left temple links with something discovered in the 'temple', linked with the adventures of the Knights Templar the Priory of Zion and related ... and 'of course' consciousness in one final 'stroke'. I saw lightning, a stroke of lightning. I thought of Zeus, Z, creation by electromagnetic energies, midnight blue, stroke of midnight, and related. A thought came to me ... I will surely die one day of a sudden stroke, consciousness quickly lifted from my physical body.

Alchemy, John Dee and other Alchemists, goes to Ascension and Ascended Masters which mentions ...

One of the most interesting beliefs about ascension is the notion of "ascension bloodlines". According to the Gnostic tradition, ascension is said to happen only after several dedicated lifetimes that directly support the ascension process. If an individual ascends leaving daughters, the daughters supposedly become able to reproduce at will rather than going through the process of sex. The ascension process is said to transmit forward along the genetic line for seven generations, giving the females the ability to give virgin birth to offspring who will ascend. The priest class in various cultures were said to guard these bloodlines in order to ensure that all descendants would ascend. This belief is based on the many accounts in mythology and spiritual history of individuals born of virgin mothers (Jesus, Mithra, etc.) who then accomplish extraordinary social changes, preceding their ascension.

The second I put the photo down, the pain in my head disappeared. What an experience. He could have just sent me an email (giggle).

I received this email from Ron, a close friend I write about from time to time on Ellie's World.

This is the link to the Padre Pio book I told you about. A distant cousin of mine was selected by Padre Pio before his death, to write his autobiography. I have never spoken to Antonio Pandiscia (Ron's last name) but I intend to try to make contact and see if he would like help in translating the book into English. 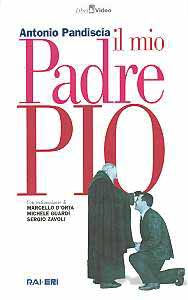