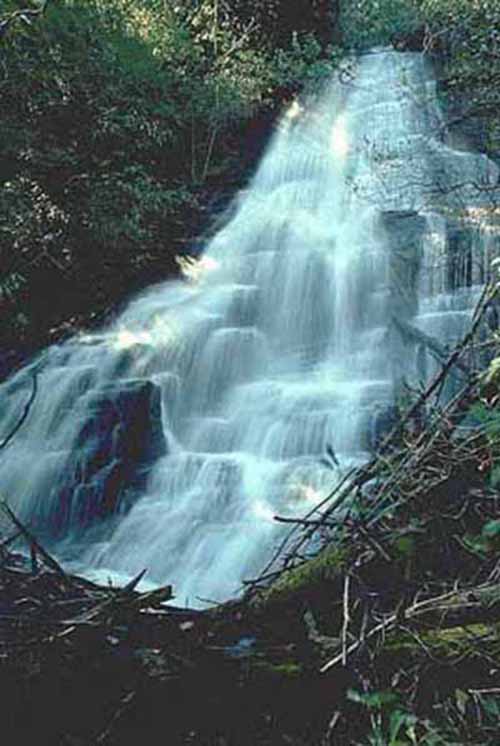 A waterfall is usually a geological formation resulting from water, often in the form of a stream, flowing over an erosion-resistant rock formation that forms a sudden break in elevation. Waterfalls may also be artificial, and they are sometimes created as garden and landscape ornament.

Some waterfalls form in mountain environments where erosion is rapid and stream courses may be subject to sudden and catastrophic change. In such cases, the waterfall may not be the end product of many years of water action over a region, but rather the result of relatively sudden geological processes such as thrust faults or volcanic action. 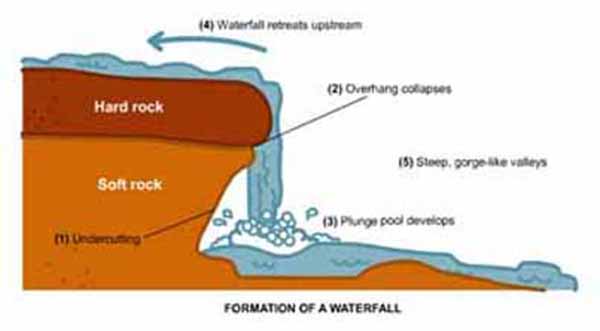 Typically, a stream flow across an area of formations strata will form shelves across the streamway, elevated above the further stream bed when the less erosion-resistant rock around it disappears. Over a period of years, the edges of this shelf will gradually break away and the waterfall will steadily move upstream. Often, the rock strata just below the more resistant shelf will be of a softer type, and will erode out to form a shallow cave-like formation known as a rock shelter (also known as a rock house) under and behind the waterfall.

Waterfalls can also form due to glaciation, whereby a stream or river flowing into a glacier continues to flow into a valley after the glacier has receded or melted. The large waterfalls in Yosemite Valley are examples of this phenomenon.

Streams often become wider and more shallow just above waterfalls due to flowing over the rock shelf, and there is usually a deep pool just below the waterfall due to the kinetic energy of the water hitting the bottom.

Water descends from a relatively wide stream or river.

Water spreads horizontally as it descends while remaining in contact with bedrock.

Water descends in a constricted form, then spreads out in a wider pool.

Distinctly separate flows of water form as it descends.

Water drops in a series of distinct steps or falls.

A series of waterfalls one after another of roughly the same size each with its own sunken plunge pool. 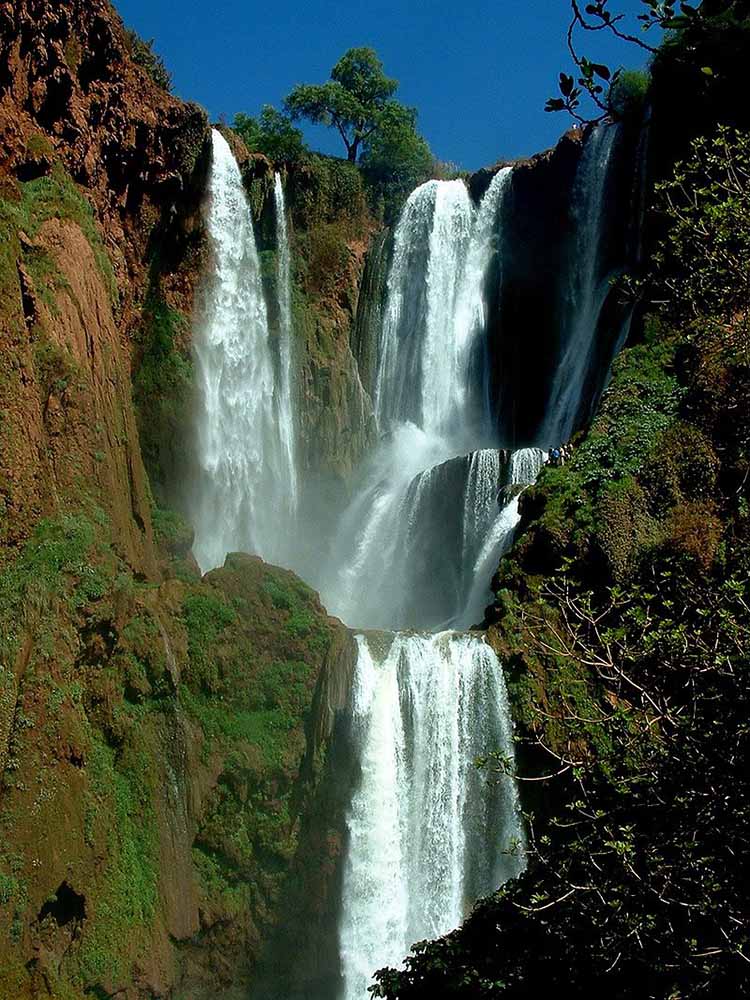 Trippy 'reverse waterfalls' seen flowing backwards in Australia   Live Science - August 12, 2020
In a year where rivers in Arizona run black with steaming sludge and red "blood snow" stains the Antarctic Peninsula, you may not be surprised to learn that several waterfalls in southeast Australia have been flowing backwards. Local news agency 7NEWS Sydney shared an aerial video of the phenomenon on Twitter last weekend. Sure enough, as water pours over the clifftops of the New South Wales coast, the stream curves back up and sprays backwards onto land. Obviously, there is a simple meteorological explanation for this reverse-waterfall action: It's just a trick of the wind.


One of Earth's Largest 'Waterfalls' Is in The Ocean, And We Just Found Its Main Source   Science Alert - July 31, 2020
Victoria Falls is said to be the largest waterfall on Earth, and Angel Falls the highest, but no matter how impressive they might look to us, both these natural wonders fall far short of the true victors. The largest and most powerful waterfalls we know of are actually surrounded by water, deep beneath the lapping waves. Tucked between Iceland and Scotland, the Faroe Bank Channel Overflow is one the mightiest of its kind. This narrow, super-deep passage connects the Norwegian sea to the North Atlantic Ocean via a continuous flow of water so cold and dense, it sinks right to the bottom. As this heavy river crosses one of the deepest parts of the Greenland-Scotland Ridge, it creates a massive undersea cascade, with water plummeting roughly 840 metres (2,756 feet), right into the Atlantic.


Turning Off Niagara Falls Could Reveal Geological Secrets   Live Science - February 9, 2016
For the first time in nearly 50 years, officials are debating turning off the tap for part of Niagara Falls. Officials have proposed drying out two of the three waterfalls that make up Niagara Falls - American Falls and Bridal Veil Falls - so that workers can repair the aging pedestrian bridges that span the rapids along the river that feeds the falls. Horseshoe Falls is the third waterfall that makes up Niagara. The proposed "dewatering" would do more than provide the curious with a rare chance to see the landscape transformed. It could also yield unprecedented insights into the rock-cutting process that is hidden beneath the flow of millions of gallons of water. Niagara Falls are "very spectacular aesthetically, but they're not studied a lot geologically," said Marcus Bursik, a geologist with the University at Buffalo, who is proposing to measure some of the changes in the falls if the water is cut off. The new plan could provide a one-time chance to do some of that geological research.


Gallery: Most Famous Waterfalls in the US   Live Science - May 31, 2013
Waterfalls have an irresistible draw on the American public. Whether people want to photograph them or ride over them in barrels, the rushing water has an indomitable, captivating power. The United States is rich with famous waterfalls. From world-renowned names to little-known cult favorites, and from roaring falls to scenic trickles, there are waterfalls in every state in the Union. Here are the most famous falls that America has to offer.