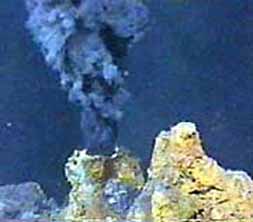 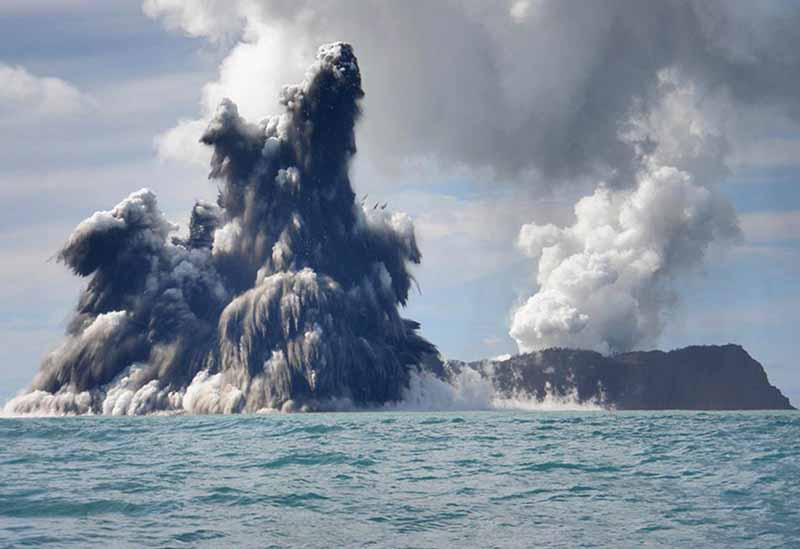 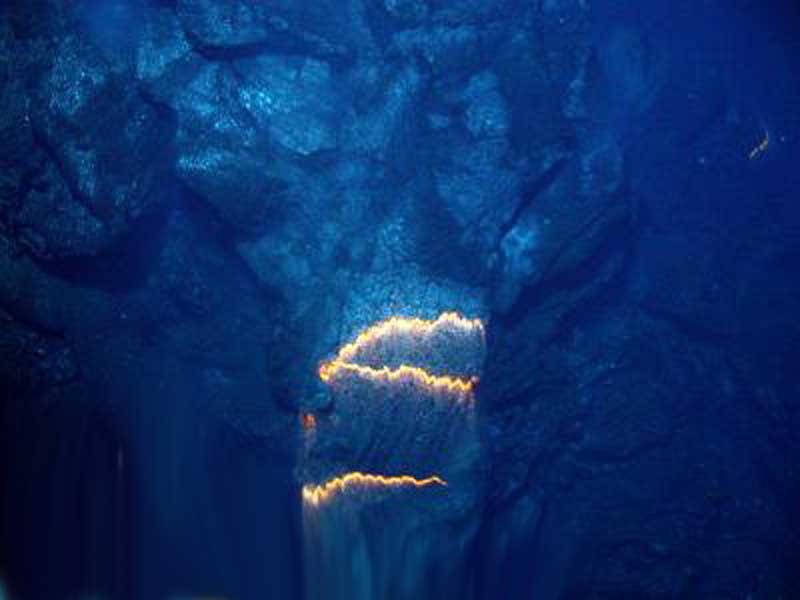 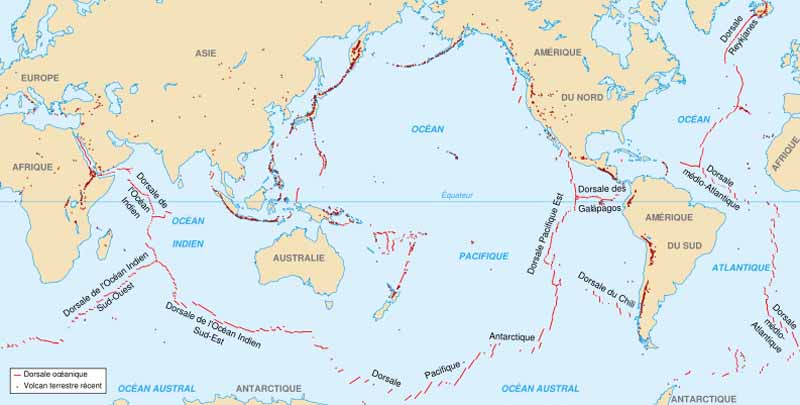 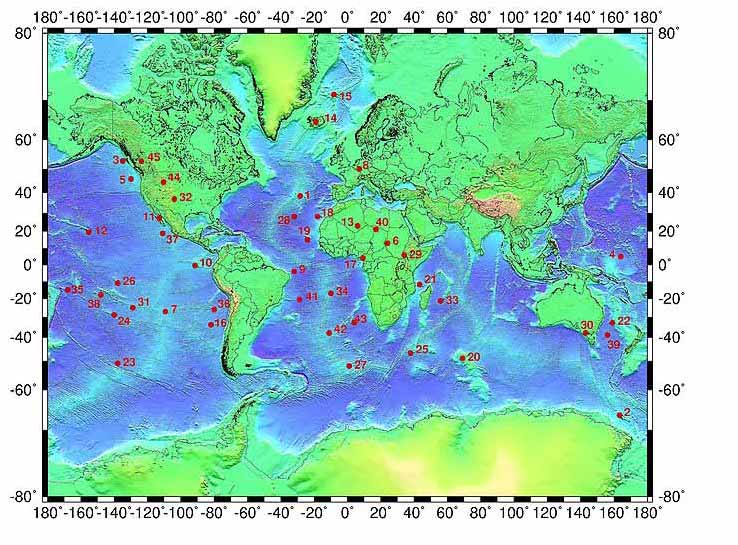 
Submarine volcanoes are underwater fissures in the Earth's surface from which magma can erupt. They are estimated to account for 75% of annual magma output. The vast majority are located near areas of tectonic plate movement, known as ocean ridges.

Although most are located in the depths of seas and oceans, some also exist in shallow water, which can spew material into the air during an eruption. Hydrothermal vents, sites of abundant biological activity, are commonly found near submarine volcanoes.

The presence of water can greatly alter the characteristics of a volcanic eruption and the explosions made by these. For instance, the increased thermal conductivity of water causes magma to cool and solidify much more quickly than in a terrestrial eruption, often turning it into a volcanic glass.

Below ocean depths of about 2200 meters where the pressure exceeds 218 atmospheres, the critical pressure of water, it can no longer boil; it becomes a supercritical fluid. Without boiling sounds, deep-sea volcanoes are difficult to detect at great distances using hydrophones.

The lava formed by submarine volcanoes is quite different from terrestrial lava. Upon contact with water, a solid crust forms around the lava. Advancing lava flows into this crust, forming what is known as pillow lava.

Scientists still have much to learn about the location and activity of underwater volcanoes. The Kolumbo underwater volcano in the Aegean Sea was discovered in 1650 when it burst from the sea and erupted, killing 70 people on the nearby island of Santorini.

More recently, NOAA's Office of Ocean Exploration has funded missions to explore submarine volcanoes. Most notably, these have been the Ring of Fire missions to the Mariana Arc in the Pacific Ocean. Using Remote Operated Vehicles, scientists studied underwater eruptions, ponds of molten sulfur, black smoker chimneys and even marine life adapted to this deep, hot environment.

Many submarine volcanoes are usually found as seamounts. These are typically formed from extinct volcanoes, that rise abruptly and are usually found rising from a seafloor of 1,000 - 4,000 meters depth. They are defined by oceanographers as independent features that rise to at least 1,000 meters above the seafloor. The peaks are often found hundreds to thousands of meters below the surface, and are therefore considered to be within the deep sea.

An estimated 30,000 seamounts occur across the globe, with only a few having been studied. However, some seamounts are also unusual. For example, while the summits of seamounts are normally hundreds of meters below sea level, the Bowie Seamount in Canada's Pacific waters rises from a depth of about 3,000 meters to within 24 meters of the sea surface.


Underwater Volcano Creates Bubbles More Than a Quarter-Mile Across   Live Science - October 17, 2019
In the early 20th century, sailors near Alaska reported seeing black bubbles seeming to boil out from the sea, each one the size of the dome of the capitol building in Washington, D.C. They weren't the only sailors who reported the bizarre phenomenon, and they weren't mistaken, except for one thing É the bubbles were much larger. When the mostly underwater Bogoslof volcano in the Aleutian Islands erupts, it produces giant bubbles that can reach up to 1,444 feet (440 meters) across, according to a new study. These bubbles are filled with volcanic gas, so when they burst they create volcanic clouds tens of thousands of feet in the sky, said lead author John Lyons, a research geophysicist at the Alaska Volcano Observatory of the U.S. Geological Survey. These volcanic clouds were captured in satellite images taken after the Bogoslof volcano last erupted in 2017 - but the bubbles themselves were never photographed.


A vast "raft" of volcanic rocks stretching is drifting through the Pacific Ocean.   BBC - August 26, 2019
The sea of pumice - the size of 20,000 football fields - was first reported by Australian sailors earlier this month. Experts say the mass likely came from an underwater volcano near Tonga


Geologists Discover Largest Underwater Volcano, Explain Weird Hum Heard Around the World   Live Science - May 23, 2019
A strange seismic event off the coast of Africa has led scientists to a mighty finding: the discovery of the largest underwater volcanic eruption ever recorded. The eruption also may explain a weird seismic event recorded in November 2018 just off the island of Mayotte, located between Madagascar and Mozambique in the Indian Ocean. Researchers described that event as a seismic hum that circled the world, but no one could figure out what sparked it. For starters, the hum rang at a single, ultralow frequency, which was strange because seismic waves usually rumble at many frequencies. Moreover, there were hardly any detectable "p-waves" or "s-waves," which usually accompany earthquakes. And, incredibly, the island of Mayotte moved a few inches south and east after the mysterious event.


Lost Chain of Underwater Volcanoes Is a Massive Whale Superhighway   Live Science - October 10, 2018
Thanks to an especially slobbery "Looney Tune," the island of Tasmania is best-known for its eponymous devils. But the nearby Tasman Sea is no less rich in oddball biodiversity. Take, for example, the newest discovery reported by the Australian research vessel the Investigator. A team of seafaring scientists has uncovered an ancient highway of massive underwater volcanoes - and those submerged mountains (or "seamounts") are apparently brimming with whales, according to a news release from Australia's national science agency.


Weird Underwater Volcano Discovered Near Baja   Live Science - December 14, 2012
Scientists have discovered one of the world's weirdest volcanoes on the seafloor near the tip of Baja, Mexico. The petite dome - about 165 feet tall (50 meters) and 4,000 feet long by 1,640 feet wide (1,200 m by 500 m) - lies along the Alarcon Rise, a submarine depression located on the seabed at the southern end of the Gulf of California. Tectonic forces are tearing the Earth's crust apart at the spreading center, creating a long rift where magma oozes toward the surface, cools and forms new ocean crust. Circling the planet like baseball seams, seafloor-spreading centers (also called midocean ridges) produce copious amounts of basalt, a low-silica content lava rock that makes up the ocean crust. (Silica, or silicon dioxide, is the main component of quartz, one of the most common minerals on Earth.)


Rise and fall of underwater volcano revealed   BBC - May14, 2012
The violent rise and collapse of an underwater volcano in the Pacific Ocean is captured in startling clarity for the first time. Researchers studying the Monowai volcano, near Tonga, recorded huge changes in height in just two weeks.