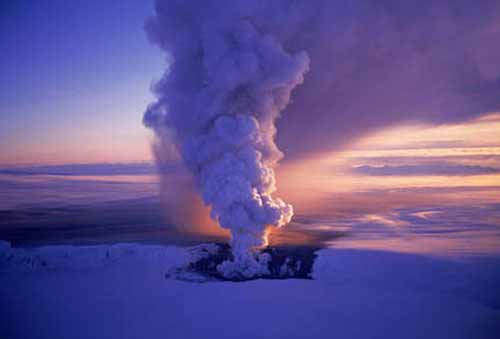 A subglacial volcano is a volcanic form produced by eruptions beneath a glacier or beneath the surface of a lake within a glacier. Today they are most commonly found in Iceland and Antarctica. Older formations of this type are found also in parts of Canada. Their shape tends to be characteristic and unusual, with a flat top and steep sides. If the heat produced by the volcano is high enough to melt through the ice layer, however, the volcano assumes a more conventional shape.

During the eruption, the heat of the lava flow from the subglacial volcano melts the overlying ice. The water quickly cools the lava, resulting in pillow shapes similar to those of underwater volcanoes. When the pillows break off and roll down the volcano slopes, pillow breccia, tuff breccia and hyaloclastite form.

The flat-topped shapes of the subglacial volcanoes are called tuyas, after Tuya Butte from northern British Columbia.

In Iceland, such volcanoes are known as table mountains.