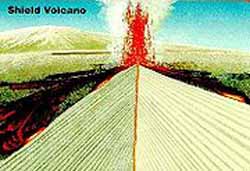 A shield volcano is a large volcano with shallow-sloping sides. The name derives from a translation of "Skjaldbreiour", an Icelandic shield volcano whose name means "broad shield", from its resemblance to a warrior's shield. Shield volcanoes are formed by lava flows of low viscosity - lava that flows easily. Consequently, a volcanic mountain having a broad profile is built up over time by flow after flow of relatively fluid basaltic lava issuing from vents or fissures on the surface of the volcano. Many of the largest volcanoes on Earth are shield volcanoes. The largest in terms of area covered is Mauna Loa of Hawaii; the tallest measured from its base under the ocean, however, is Mauna Kea of Hawaii. All the volcanoes in the Hawaiian Islands are shield volcanoes.

Shield volcanoes can be so large that they are sometimes considered to be a mountain range, such as the Ilgachuz Range and the Rainbow Range, both of which are located in Canada. These shield volcanoes formed when the North American Plate moved over a hotspot similar to the one feeding the Hawaiian Islands, called the Anahim hotspot. Shield volcanoes can be found in many places around the world, including Australia, Ethiopia, and the Galapagos Islands. The Piton de la Fournaise, on Reunion Island, is one of the most active shield volcanoes on earth, with one eruption per year on average.

The viscosity of magma as it approaches the surface is dependent on its temperature and composition. Shield volcanoes in the Hawaiian Islands erupt magma as hot as 1,200 degrees C (2,200 degrees F), compared with 850 degrees C (1,560 degrees F) for most continental volcanoes, which are usually composed of acidic lava. Because of the fluidity of the lava, major explosive eruptions do not occur. The most severe explosions occur if water enters a vent, although expanding gases in the magma can produce spectacular fountaining of the low viscosity lava.