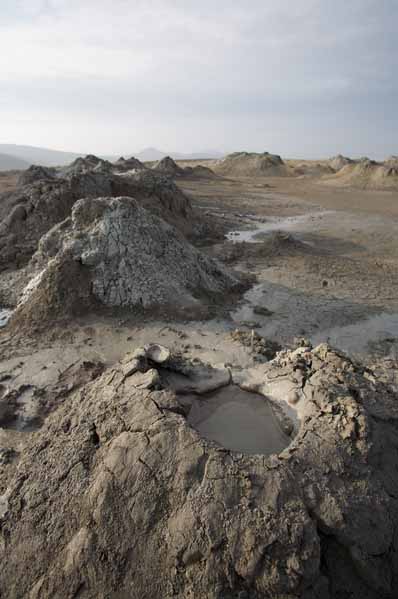 A mud volcano or mud dome is a landform created by the eruption of mud or slurries, water and gases. Several geological processes may cause the formation of mud volcanoes. Mud volcanoes are not true igneous volcanoes as they do not produce lava and are not necessarily driven by magmatic activity. The Earth continuously exudes a mud-like substance, which may sometimes be referred to as a "mud volcano". Mud volcanoes may range in size from merely 1 or 2 meters high and 1 or 2 meters wide, to 700 meters high and 10 kilometers wide. Smaller mud exudations are sometimes referred to as mud-pots. The largest (man made) mud volcano is "Lusi" in Java, Indonesia, which is 10 kilometres (6 mi) in diameter.

The mud produced by mud volcanoes is mostly formed as hot water, which has been heated deep below the Earth's surface, begins to mix and blend with subterranean mineral deposits, thus creating the mud slurry exudate. This material is then forced upwards through a geological fault or fissure due to local subterranean pressure imbalances. Mud volcanoes are associated with subduction zones and about 1100 have been identified on or near land. The temperature of any given active mud volcano generally remains fairly steady and is much lower than the typical temperatures found in igneous volcanoes. Mud volcano temperatures can range from near 100 °C (212 °F) to occasionally 2 °C (36 °F), some being used as popular "mud baths."

About 86% of the gas released from these structures is methane, with much less carbon dioxide and nitrogen emitted. Ejected materials are most often a slurry of fine solids suspended in water that may contain a mixture of salts, acids and various hydrocarbons. Possible mud volcanoes have been identified on Mars. Read more

Masses of methane from mud volcanoes   PhysOrg - June 13, 2018
In the seabed, there are numerous microorganisms that play an important role in the global carbon cycle. Until now, however, it has not been understood to what extent geodynamic processes such as the subduction of oceanic plates influence this microbial activity and, in turn, impact the carbon balance. A study carried out by an international team of researchers, including scientists from the GFZ German Research Centre for Geosciences, now provides new evidence. They drilled down to a depth of 200 meters into an underwater mud volcano. Based on the recovered samples, they found that the microorganisms in the sediment are extremely active and form about 90 percent of the methane released from that depth. Apparently, the role of mud volcanoes in the global methane cycle has been significantly underestimated, the authors now conclude.


Amazing Images of Pakistan's Earthquake Island   Live Science - October 1, 2013
A new island, now called Zalzala Koh, emerged offshore of the town of Gwadar in Pakistan after a powerful Sept. 24 earthquake. Likely a form of mud volcano, the island rose from the seafloor hours after the magnitude-7.7 earthquake struck about 380 kilometers (230 miles) inland.


How Did the Pakistan Earthquake Create a Mud Island?   National Geographic - September 26, 2013
On Tuesday, a 7.7-magnitude earthquake struck a remote part of western Pakistan, killing more than 260 people and displacing hundreds of thousands. It also triggered formation of a new island off the coast, which has quickly become a global curiosity. But scientists say the island won't last long. "It's a transient feature," said Bill Barnhart, a research geophysicist with the U.S. Geological Survey. "It will probably be gone within a couple of months. It's just a big pile of mud that was on the seafloor that got pushed up."


Pakistan earthquake creates new island, 'mud volcano' to blame   NBC - September 25, 2013
Mud houses in the mountains crumbled as a 7.7-magnitude earthquake shook western Pakistan early on Tuesday. Meanwhile, on the coast, residents of Gwadar saw a solitary island rise from the sea. Seismologists suspect the island is a temporary formation resulting from a "mud volcano," a jet of mud, sand and water that gushed to the surface as the temblor churned and pressurized that slurry under the ocean floor.


Deadly Mud Volcano to Erupt for 26 More Years   National Geographic - March 5, 2011
Mud from Indonesia's Lusi volcano engulfs the village of Sidoarjo, East Java. The world's biggest and fastest growing mud volcano, Lusi sprang to life in May 2006, and it and may continue to spew hot mud for another 26 years, according to a new study. Lusi could expel the equivalent of 56,000 Olympic-size swimming pools of mud before it finally simmers down, say scientists from the U.K.'s Durham University.


Link Between Exploration Well and Lusi Mud Volcano, Strongest Evidence to Date Shows   Science Daily - February 14, 2010
New data provides the strongest evidence to date that the world's biggest mud volcano, which killed 13 people in 2006 and displaced thirty thousand people in East Java, Indonesia, was not caused by an earthquake


"Medusa" Worms Found in Mud Volcano    National Geographic - December 10, 2008
These new, undersea worms don't have eyes to turn you into stone. But their resemblance to snake-haired Medusa (above) wasn't lost on discoverer Ana Hilario, who plans to name at least one after the mythological Greek monster. Hilario, of Portugal's University of Aveiro, and colleagues recently found 20 species of the tiny worms, called frenulates, in mud volcanoes in the Gulf of C‡diz, an arm of the Atlantic Ocean southwest of Spain.


Mud eruption 'caused by drilling' BBC - November 1, 2008
The eruption of the Lusi mud volcano in Indonesia was caused by drilling for oil and gas, a meeting of 74 leading geologists has concluded. Lusi erupted in May 2006 and continues to spew out boiling mud, displacing around 30,000 people in East Java. Drilling firm Lapindo Brantas denies a nearby well was the trigger, blaming an earthquake 280km (174 miles) away.