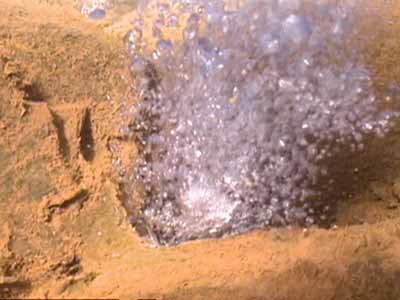 Currently there are over five thousand active volcanoes underwater varying from ones larger than any on the surface to cones no larger than an automobile. The net reslut of this action is thermal heating of the oceans, at key positions, which in turn reaches the surfaceto be carried aloft into the atmosphere to become part of our surface weather pattern system. As the oceans are heated winds of a high velocity are created and driven over the land areas due to temperature differential.

In the Pacific Ocean there are ocean basins - volcanoes, of which there are estimated to be about 20,000 on the ocean bottoms of the world. Some of these form single mountains, and others join with other volcanoes to form ridges. The highest ones rise above the surface of the water as islands, which in many cases linear groups such as the Hawaiian Islands.

Island groups are simply the highest summits of ridges. The submerged part of the Hawaiian Islands is among the largest and longest of these volcanic ridges--more than 1,500 miles (2,400 kilometers) long.

Many island groups of the Pacific are linear in form, with the largest and highest island of the group at one end and the lowest and smallest at the other. This feature is true of the Hawaiian Islands, explained as the result of intermittent movement of the tectonic plate over what is called a hot spot.

Molten volcanic material is ejected from it and results in the formation of a large mass of material if the plate pauses for a sufficient length of time at the spot. In this way a volcanic island, or ridge, is built. The plate moves, and another part of it lies over the hot spot, receiving fresh volcanic material. Meanwhile the older material, if it has become an island, is subject to erosion and thus is worn down. 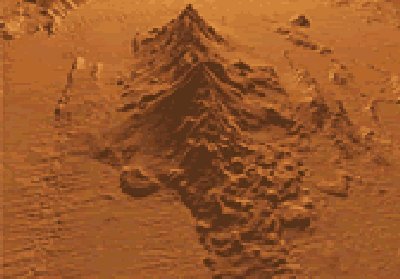 Europe's largest underwater volcano is active according to the scientists who have been monitoring it for years, but until recently believed it to be dormant. There has never been an eruption of the volcano in recorded history. The Tyrrhenian Project, the national research group studying the volcano, reported its findings last November 27, 1999.

Mt. Marsili, which rises 9,800 feet (3,000 meters) from the seabed in the Tyrrhenian Sea southwest of Naples, is capable of producing huge tidal waves along southern Italy if its activity ever does build to an eruption. According to the researchers, "Il Marsili'" is about 40 miles (65 km) long and 25 miles (40 km) wide. The experts said its tip was only 1,640 feet (500 metres) below the surface of the water.

Michael Marani, the scientist heading up the study of the volcano, said, "Because the Tyrrhenian Sea is the youngest sea in the Mediterranean, it is still unstable and carries elevated risks that must be monitored and understood." He reported that evidence of enormous masses which had probably broken away from the main crater a long time ago were found on the volcanic edge.

Underwater Volcano Erupts on Video National Geographic - May 25, 2006
A volcano is seen erupting 1,800 feet beneath the surface of the Pacific Ocean near Guam.

The North Pacific's Ring of Fire can claim a new member - a previously unknown underwater volcano in Alaska's Aleutian Islands that researchers in Alaska revealed Monday. Scientists this summer mapped the cone-shaped volcano, which rises beneath the waters near Amchitka Pass, a gap in the chain of largely uninhabited islands that separate the Pacific Ocean from the Bering Sea.

The volcano rises 1,903 feet above the sea floor and tops out less than 377 feet from the water's surface, said researchers with the University of Alaska Fairbanks and the National Marine Fisheries Service. The volcano is considered active but dormant, although it could erupt at any time, officials warned.

If it did erupt, it could produce a new island in the Aleutian chain, which arcs from southwestern Alaska to Siberia. An eruption could also bring some dangers to local mariners, either from lava or ash breaking the sea surface or from gaseous waters creating conditions that cause vessels to sink.

The Alaska Volcano Observatory, operated jointly by federal and state agencies, plans to place a seismic monitor on nearby Semisopochnoi Island by 2005, Reynolds said. The volcano is similar to a few others that have been found in places like the waters off Iceland. The discovery of the volcano, which remains unnamed, was a byproduct of a coral reef survey conducted in the Bering Sea and North Pacific.

Marine geologists have reported that a newly discovered undersea volcano east of Samoa is erupting, sending out a five-mile cloud of "smoggy" water from its summit.

Local students recently named the volcano, located 28 miles east of Taiu Island, 'Vailulu'u'. The volcano rises up more than 16,400 feet from the seabed to within 2,000 feet of the ocean's surface.

Scientists from Scripps Institution of Oceanography and the Woods Hole Oceanographic Institution first mapped the volcano during a research cruise in 1999. They returned this spring to find the volcano erupting. Anthony Koppers, a scientist at Scripps who studies undersea volcanoes, said the find was exciting because so few of the world's undersea volcanoes are accessible to study. He said, "We have access to the buildup of a volcano that will eventually become an island."

The group left underwater microphones positioned near Vailulu'u and on the crater floor to record the rumblings that would indicate the movement of magma within.

Students in American Samoa held a contest to name the new volcano. Vailulu'u is the name for the sacred rain that always fell as a blessing before a gathering of the famed King Tuimanuia. ollapse would result in massive earthquakes in the region.